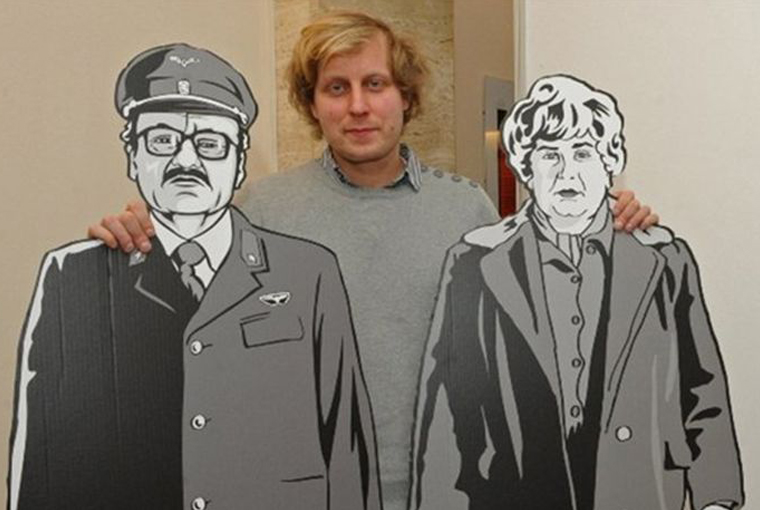 What was the idea behind the film?

The scriptwriter Jaromir 99 (co-author of the graphic novel) and I have known each other since before he started drawing the comic. He was born and lived where the action takes place, and I had directed a clip for the group Priessnitz, so he helped out since he used to be a singer. So we had worked together before. Then Jaromir 99 and Jaroslav Rudis directed the first volume of the comic. Noone thought it could become a film. But it has had great success. It was the first cartoon for adults published in Czechoslovakia. From this success came the next two volumes. So the trilogy was born, it can now also be found in Poland and Germany. The producers read the whole thing and asked the authors if they wanted to make an adaptation for cinema. I didn’t know any producers myself. They were looking for a director and I had started to work on the story board. I was finishing my studies at FAMU, the film school in Prague. I brought up the subject and was offered the role of director and screenwriter. We didn’t know what methods we were going to use. We planned to make an animated version. At the time, a really good adaptation of Sin City was on the TV. It was with this in mind that we started working. Since the film was made with the authors of the comic, we had to keep the same style.

Is it still your film?

I’m a beginner, I’m not the author of the comic strip. I wanted to be of service to the writers who are from Sudetenland, where the action takes place. I tried keep their intentions in mind, and at the same time, there is a big evolution. For example, I made many changes to the characters. The hero was like a character from Bohumil Hrabal who comments on everything that happens. In the film, we tried to understand the mentality of the people who lived in the region, even if I tried to find actors who looked like the original characters. It’s important to understand that. For me, it’s the first time that those I work with are my schoolmates. It’s also a first film for Jaromir 99, and for Jaroslav Rudis, it’s the second one. You must also understand that rotoscopie, a technique which involves getting the outline of a filmed figure with real filming, is so new in this country that it’s the first time it has been used. When I was at school, I was closer to the Czech animation school, even if now I’m closer to fiction films. It’s my first experience with actors. I’ll still always be influenced by animation films. As for the Rotoscopie, it’s more difficult than we thought. If we had known what it involved, we wouldn’t have made the film. Call it beginner’s naiveté.

What was the most difficult thing?

For me, the most difficult thing was to decide what were the most important things for a scene. Now, it’s your turn to decide. It took a long time to reflect on every detail for every shot. I made some bad decisions. We had to go back on what we had already done. We could decide if it was raining or snowing, what wonderful freedom, but then freedom can be so restrictive! I prefer simple solutions. It’s like in Czechoslovakia: freedom complicates our lives (laughter). We did tests, there was a story-board, all was settled. The first editing made the film 110 minutes long, at the end we got down to 85. Let’s take an example. We shot one scene in a night shelter, where two people are alone at night, but during the filming it was daytime, and open to the public as well, so there were many people. It wasn’t until later that we decided it would be a night time scene and that they would be alone. Everything in one decision, that’s what makes this film.

So did it take a long time?

Five years altogether, two and a half for the animation and the rotoscopie, forty days for filming, then the rest for editing and six months for the sound. I’m very happy that we finished, that we bore through it.

We’ve been working on something for three years now, and once again it will be about the history of Czechoslovakia, from 1888 to the eve of the Second World War. It will be out in five years.