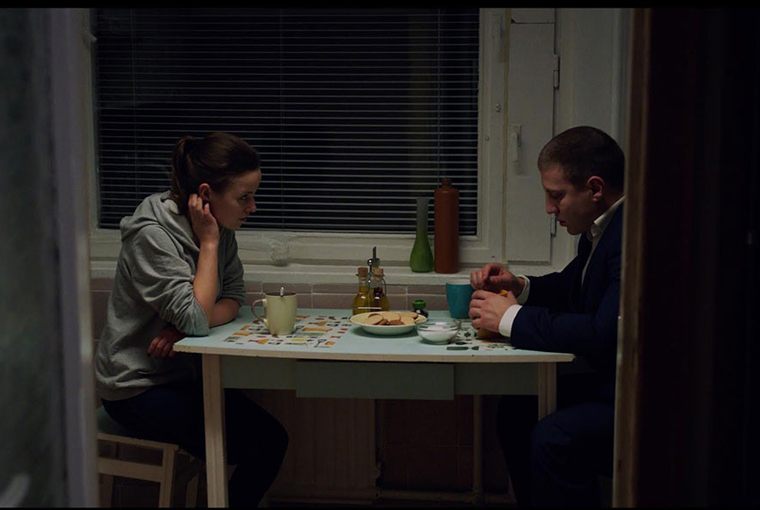 On October the 26th 2008, Jesus Christ was sighted in a small estate, just outside of Vilnius. The citizens of the neighbouring town – losing their once steady jobs – struggle to make ends meet and are thus forced to relocate with their families elsewhere. Former mechanic Vytas is one such person, caught in the height of Lithuania’s financial instability and the economical consequences that come with it. The film’s narrative documents his search for employment and the impact it has on his familial relationships.

A creature of habit, Vytas spends most of his spare time at home working out in the living room. Often semi-naked but always shot with unflattering light and angles, Vytas’ displays of athleticism are desexualized. Rather than denoting power and virility, Repsys’ thick layer of fat renders him soft and rounded. It lends his appearance a tone of vulnerability, exacerbated further by his hourglass shaped waist. (Marius Repsys is perfectly cast with his top-heavy figure and muscular arms and legs.) In general, the film takes every opportunity to depict Vytas as an effeminate man and an interesting way to interpret his preoccupation with bodybuilding is to read it as an attempt to compensate for his loss of masculinity. He cries at his lack of sexual prowess when he constantly falls short of initiating a romantic relationship with Marija, a new girl in town who works at the local hair salon. He violently assaults his wife to assert his dominance over the household after she is made the breadwinner of the family. And he buys an expensive, new suit – an icon of masculinity – partly for a job interview but mainly for his dwindling ego, wearing it even to lounge on the pull-out couch to watch television.

Vytas is constantly infantilized by his environment, stripping him of both his masculinity and independence. Like a scene from his adolescence, Vytas visits his best friend and ex-colleague who now lives at his mother’s again. They browse the Internet while the friend’s mother serves them beer and cooks them dinner in his old childhood bedroom. Similarly, at the job seeker training center, the patronizing teacher informs the unresponsive crowd of the importance of personal hygiene, good posture and a smartly dressed personal image. The adults are treated like school children back in the classroom, spoon-fed obvious common knowledge. The regressive nature with which his peers treat their interactions is even more present during his job interview, where the pretentious employer constantly interrupts Vytas’ responses and answers his own ridiculous questions instead. The ensuing dialogue between both characters would not look out of place in a head teacher’s office during detention.

In the last shot of the film, Vytas and his wife are framed through a small window of their pokey apartment. Returning home after threatening – and failing – to leave her, he literally switches roles with his wife. Where once Vytas would wait patiently for his wife to cook dinner, she sits in his place at the kitchen table and watches him prepare and cook the food. The silence of the scene seems to emphasize their mutual cooperation as both parties have finally come to terms with the inexorable shift in power within their conventional gender hierarchy.

The theme of religion is arguably given a damning depiction and often exploited for comic relief by the director. In giving his feature film project an absurdly religious premise and title, Blaževičius’ portrayal of the church warrants close inspection by the audience. At one point in the film, Vytas assists his best friend in running an errand for the church that requires them to carry out some shopping. In the local supermarket, they find the cheapest red wine on offer and fill an entire shopping cart with it, joking about the church’s exhaustive consumption of alcohol on a daily basis. Upon returning to meet the vicar with their goods, the head of the church feigns a wine taster’s knowledge of vintage years and vineyards, mispronouncing their names as the bottles are plonked one by one onto his desk, their small, yellow reduced sale stickers plainly visible. The down to earth Vytas and his best friend are stark contrasts to the pompous vicar. Here, the humor lies in the clergy’s failed attempts to impress a couple of unbelievers. Vytas and his best friend refuse to take religion seriously, attending a service immediately after a night of heavy drinking and celebration. Giggling from the pews, a hungover Vytas watches his drowsy best friend – the unlikely bell ringer – fall asleep on the job and drop his instrument, loudly disrupting a prayer.

Yet the ending of the film clearly marks a change in Vytas’ attitude towards religion. Initially, he was quick to ridicule and criticize the awkward young man who claimed to have witnessed the presumed apparition. While viewing the found footage on YouTube, he laughs at the quality of the video, mocking the quivering handheld camera and poor focus of the image. Vytas’ dismissive attitude is justified somewhat by the disheveled appearance of the man on screen with his bruised nose, shaved head and facial scars. His judgement, therefore, is also mirrored by the audience’s expectation of such a disreputable looking character. However, by the end of the story, Vytas no longer considers the youth insane. Both staring in front of the wall where Jesus Christ was once sighted, Vytas is framed as standing in alignment with the young man, agreeable and desperate for the hope that religion promises. Faith is a last resort for Vytas, something he is clearly uncomfortable submitting to and something which ultimately fails him. Perhaps out of necessity rather than choice, Vytas understands the importance of having something to believe in and here he waits for a sign that never comes. 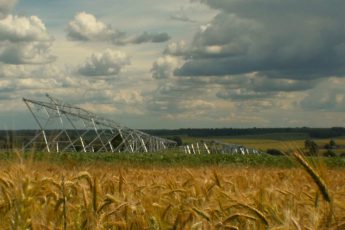