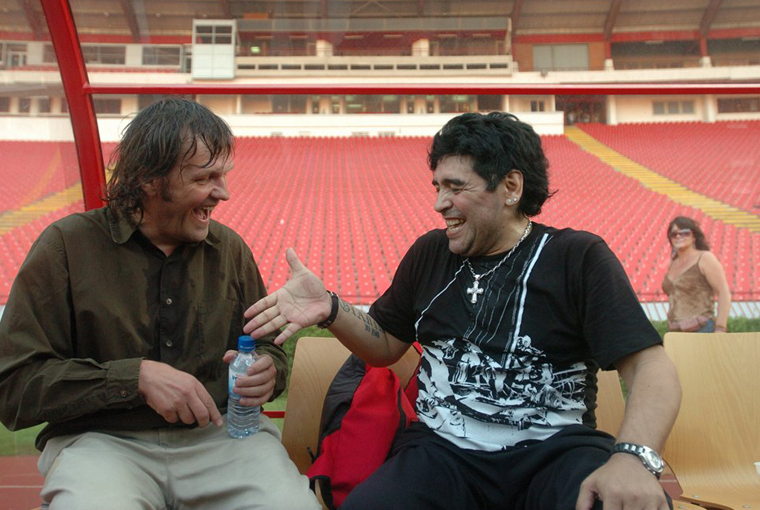 One does not need to know the US TV landscape very well to be familiar with the various accusations that journalists throw at acolytes of the opposing political camp. In the ever-lasting pre-election period, many a talk show at Fox News, ABC News, and even Comedy Central is dedicated to such ‘dirty work’, which runs under the pretext of investigative journalism, but, more often than not, indulges into tendential portrayals of the rival party’s candidate. Emir Kusturica, though not a politician and thus less susceptible to criticism, has himself been subject to much foreign criticism, and he seems to think that his portrayals in the foreign press were guided by biased views about him and his countrymen. In recent years, he has stylised this negative view as a sort of witch hunt. In Maradona by Kusturica (also known as Maradona), though, Kusturica himself takes on the role of a journalist, hoping to correct the public opinion of a man who was subject to much criticism himself: Diego Armando Maradona. “Most people only remember Maradona for the bad parts now. But he was a genius, someone who lifted us and himself up to the level of the gods. [… ] There are always motherfuckers queuing up to pull you down to earth. But we must fly occasionally, we all have to feel that joy or we are nothing” (The Guardian, 4th March 2003).

Though it is not Kusturica’s first attempt in the documentary genre, clearly, it is not his home game, and his approach is much less organised than it was in his films of the 90s. After a brief introduction in which Kusturica explains the purpose of the film, Maradona is seen at an anti-Bush rally which aims at “repudiating that piece of human garbage”, and then, back on the pitch, with Kusturica quickly summarizing Maradona’s road from world champion to cocaine addict. But Kusturica soon concedes that he doesn’t feel comfortable with his new role as a ‘journalist’. “Suddenly I am taking on the role those very people I have never liked. I feel like a papparazo waiting for a star to wake up and to step in front of my camera lens, so I can sell the photos to the tabloid.”

During the film, however, none of this unease is visible. Instead of taking on the role of the “motherfucker” and papparazo, Kusturica plays Maradona’s game. Maradona is shown both as a revolutionary and a sentimentalist, condemning the crimes of the West while lamenting the family birthdays he missed due to his drug addiction. In proper style of a true communist leader, his hatred of the West is only outmatched by the unconditional love for his country and children. The reason for this parallelism is manifest: Kusturica’s film isn’t really a documentary about a football player, it’s a platform for Maradona’s self-staging delivered with Kusturica’s utmost benevolence, where most of the film’s message is communicated through monologues by Maradona himself – uncut, and uncommented. In short, a quasi-propaganda piece that serves as a tool for the glorification of Maradona, and as a stab at the imperialist policies of Great Britain and the US. And as is the case for many propaganda films, the main appeal of the film lies in the incredibility of this bias which is guided by extreme political axioms (sometime after the anti-Bush rallies, Maradona is shown next to Hugo Chavez and Fidel Castro, passionately praising their work, as if the arguments for supporting them were as obvious as the ones for opposing Bush).

Surely, Kusturica’s political tendencies are no secret. The real problem, however, were never his opinions, but their communication (see Maradonna) as well as his apparent basis for them. “If I was English I would be very much against Vladimir Putin. If I was American I would even fight with him, but if I was Russian I would vote for him,” he told Ria Novosti, a state-owned Russian news agency, in February. For a director who was crowned with the Palme d’Or for his cinematic treatment of Yugoslavia’s past, where identity was used as a pretext for crimes against humanity, this is a clumsy statement to say the least. Similarly, the Bosnian-born director justified his conversion to Orthodox Christianity by gesturing towards the reasons for his family’s Islamic orientation: “My father was an atheist and he always described himself as a Serb. OK, maybe we were Muslim for 250 years, but we were orthodox before that and deep down we were always Serbs, religion cannot change that. We only became Muslims to survive the Turks” (The Guardian). While Kusturica may well be too clever to indulge in explicit nationalism, statements like these do raise questions about the supposed objectivity of Underground. As many have claimed, national identities are not so irrelevant to Kusturica after all.

In the end, for all the imperialist actions – past and present – that Great Britain and United States are responsible for, there is a crucial thing that the British and the Americans know that Kusturica doesn’t seem to understand: in the 21st century, you don’t have to be in favor of Bush if you’re American, or in favor of Putin if you’re Russian. That Kusturica, as an intellectual from a war-torn country, lacks this basic (indeed, banal!) understanding is a sad disenchantment. Similarly, Kusturica should probably dig deeper to find out why many journalists are so keen on criticizing him and Maradona – it may not all be foreign propaganda. Finally, if this film is Kusturica’s solution to biased journalism, Fox News does not seem so terrible anymore.

Some critics (see Žižek) have accused Kusturica of avoiding a clear political stance toward the Yugoslav Wars in Underground, but judging by this film, that might not be such a bad thing…