A Dreamlike Trip from Azerbaijan to Africa 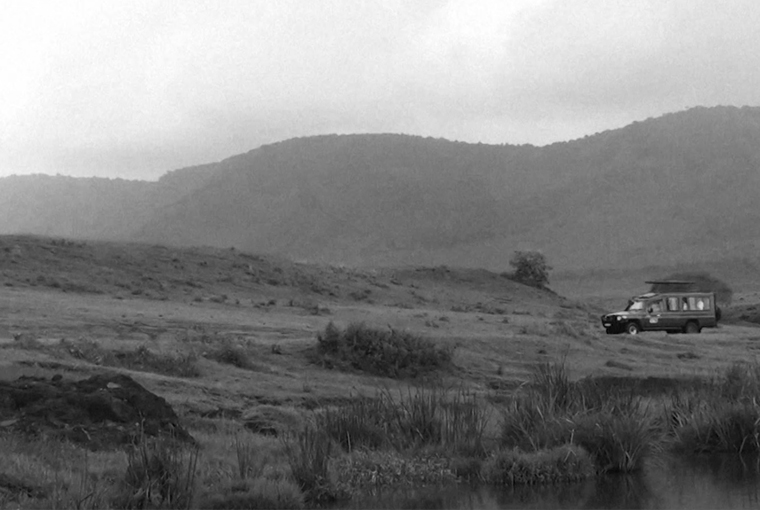 I Still Must Watch You Turn To Stone is the latest work by Azerbaijani filmmaker Ismail Safarali. Blending dreamy imagery with an experimental soundtrack, the short allows Safarali to utilize a range of filmmaking techniques to explore the connections between different peoples, as well as between humans and nature. Telling a loose and consciously ambiguous plot, the film features the recurring dream experienced by both a father and his daughter following a trip to Africa, with the pair ultimately expressing their feelings through poetry which is accompanied by imagery from the dream.

In his three preceding films, Safarali demonstrated a tendency to tackle personal and moving narratives with a sense of melancholy. His debut film, Tekbetek (2014), depicted the lonely existence of Farrukh, an Azerbaijani boy who has very little fulfillment other than football and improbable dreams of becoming a famous footballer. Instead, the remote village where he lives only offers poverty and a harsh landscape, so dreams are the only form of escape from the repetitive nature of the environment Farrukh finds himself trapped in. Safarali followed up with A Lullaby For Yuki (2015), a film shot in black-and-white that portrayed a rendezvous between two friends and the secrets their meeting uncovered. Through the dimly-lit cinematography and a downbeat subject matter, Safarali was again able to utilize his melancholic style in a number of scenes which (similarly to I Still…) combine poetic imagery with music to great effect. In his third film, Sea of Tranquility (2017), Safarali told the story of Jafar, who investigates the truth behind the death of his cousin. Just as he had done in A Lullaby For Yuki, Safarali further explored the dangers of delving into difficult truths.

His latest work, I Still Must Watch You Turn To Stone, allows Safarali to both revisit some of these themes, and to experiment with aesthetics and narratives that differ from his earlier films. I Still… opens with a scene in which a group of African women sing and dance whilst W.H. Auden’s poem As I Walked Out One Evening is read by an offscreen American female voice. Safarali makes his filmmaking intentions clear: his handheld camera pans across the faces and captures the dancing locals, who almost seem to be responding to Auden’s poem. The camera occasionally crash-zooms on one of the women’s faces. Further scenes also serve to establish Safarali’s unpolished aesthetic. One time we hear African singing which accompanies images of lions that are shot with a noticeably shaky camera and reduced image-quality. This is reminiscent of a home video production, possibly that of a wealthy tourist. The grainy and deliberately amateur production quality continues into the next scene which is shot in low-light and is again extremely grainy as a result.

The audience are presented with a recurring motif of a close-up of part of a young woman’s face with her hair blowing in the wind. Repeatedly cutting back to this image throughout the remainder of the film, Safarali places significance on it, yet the exact extent of its importance is unclear. Perhaps we are to view this repetition and ambiguity in the same way we might recall our dreams, which sometimes contain such patterns but ultimately remain illogical. The close-ups shown here are inserted within scenes of a group of African men dancing. The immediate sense is that the men are singing as well as dancing, however the sounds are more likely to be non-diegetic as the audio contains the playing of musical instruments which are never shown. The soundtrack provides a bridge linking the African men dancing and close-up images of the young white woman’s hair blowing in the wind. This creates a juxtaposition between the realistic ‘holiday video’ aesthetic which has been established up to this point, and a sense of artificiality suggested in the soundtrack; this is perhaps Safarail commenting negatively on the nature of cultural tourism which takes places when wealthy white tourists seek out ‘the real Africa’. This criticism is further reinforced in the next images which show white women – complete with the same beaded necklaces worn by the African men – jumping in delight at their engagement with the African dance, yet from the expressions on their faces it is clear they do not know exactly why they are jumping.

Throughout the duration of I Still… Safarali continues to revisit these themes and stylistic devices, often cross-cutting between shots of African men either simply standing around or engaging in everyday tasks, images that are juxtaposed with the white tourists predominantly shown at night-time as they check messages on their phones or read poetry. Owing to the low-level lighting, these latter images are extremely grainy and result in an unattractive mise-en-scène, which is especially noticeable when cuts are made back to the brighter and clearer shots of the Africans. Safarali is also able to experiment with audio when, towards the film’s conclusion, the recital of a poem repeats and overlaps, causing a hypnotic sensation. The feeling created here with audio, and accompanied by a montage of poetic images of nature, is perhaps the most dreamlike in the entire film. This is the point when narrative closure is rejected altogether. During moments like these, when he embraces the ambiguity that dreams often provide, Safarali is at his most creative.