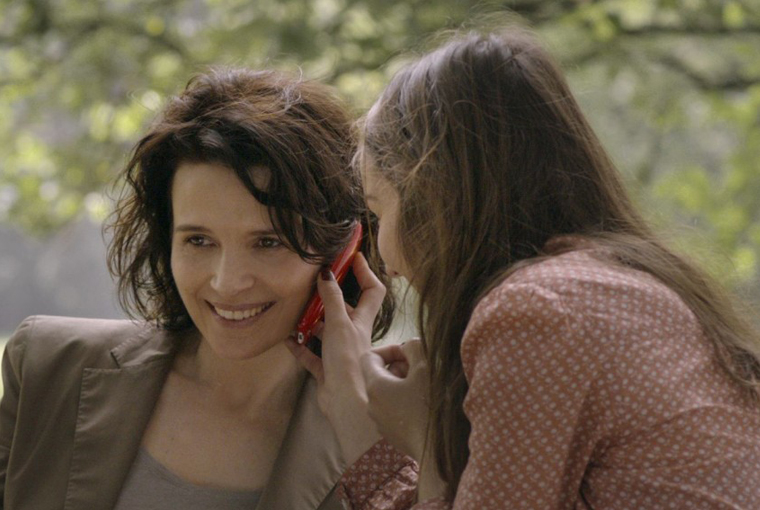 Elles is the latest film from director Małgorzata Szumowska. Set in Paris, it tells the story of Anne (Juliette Binoche), a journalist from Elle magazine, who is writing an article on Charlotte (Anaïs Demoustier) and Alicja (Joanna Kulig), students who prostitute themselves to pay for their studies. This unconventional way of financing themselves seems to cause them few moral dilemmas. Anne, on the other hand, is deeply troubled by their situation. The film is made by a Polish director, but is nevertheless quintessentially French. For instance, there’s the bourgeois Parisian apartment with big tables and a chic black-and-white kitchen which seems to be obligatory in French films examining class issues…

The actress who plays Alicja told me in an interview that the French producers were looking for an Eastern European director to get an outsider’s view on the issue. Indeed, Szumowska has captured a very special aspect of French culture that is often perplexing to an outsider. Consensual prostitution is alarming to many people. Anne, the journalist, keeps trying to find out why the girls are doing this: ‘is it the money’, she asks ‘do you like being dominated’, ‘is it the power?’, but all her questions fall by the wayside. She seems to think she can come up with some kind of magical answer: child abuse, incest, too much exposure to porn. A way that men manipulated them into this life. Certainly the girls needed the money, but the reasons aren’t simple.

The film explores an interesting paradox of French society by which women are put down verbally while leading successful professional and private lives. French women are admired for their strength, and general dynamism, yet they seem to happily endure this nominal belittling. Harmless though this paradox may seem, it is perplexing to foreigners and those who aren’t naturally adept at playing this ‘game’ which seems to be an obligatory part of French society. Being such an integral part of society, the paradox also begs the question, what happens when it isn’t a game anymore?

When in the film, the second student Charlotte, using the prostitute name ‘Lola’, is telling the journalist about the things men like to say to her while they’re having sex: ’do you like my huge penis’ / ‘you’re such a little whore’ / ‘is this making you wet?’, Anne looks up in alarm at the last question. ‘Me?’, she asks. ‘No’, the girl replies, laughing: ‘that’s just something they ask me’. How is being told you’re a whore any more or any less degrading than being called ‘little’ in polite society? These girls know there is no difference, this is their secret, and it’s what makes them so powerful. The clients are a whole different complication. These are happily married men who can’t explore their sexuality with their own wives. Alicja’s first client gives her a ‘golden shower’, something it seems he has always wanted to do but never had dared to do with his wife. Afterwards they sit together on the couch singing Les feuilles mortes with him playing the guitar and her singing along. This cute scene where both characters seem pretty happy underlines concisely something essential and problematic in the film: men who already have partners can’t have honest sex with them. Still, the journalist can’t understand why Alicja doesn’t find it degrading. ‘It’s fun’ affirms Alicja, and turns the question back on the journalist, who of course doesn’t want to answer.

Most people would agree that there are different types of female prostitutes. In the 2010 Julia Leigh film Sleeping Beauty, the young Lucy, a university student like the protagonist in Szumowska’s film, works in a brothel where she takes strong sedatives, then lies on a bed naked with different men who are allowed to do anything they want to her body – except penetration. Isn’t Lucy a prostitute? There are women who stand on the side of the street late at night, there’s others who work in brothels or strip clubs, escorts who get paid high sums of money to dress up and go to fancy dinners with their clients, there are trophy wives, and then of course there are journalists like Anne, who have a full time job like their husbands, but cook and clean and look after the children as well. So we have to wonder where to draw the line, and it’s this question that is explored in this film through Anne the journalist, who asks her husband the question which will crudely sum up this point: are all women prostitutes?

But the students in this film aren’t prostitutes in some whimsical metaphorical way, they are really sex workers. It seems strange. The girls seem to have everything, beauty, intelligence, youth on their side. They are upper class young ladies, just starting their lives and their studies. But it’s not really enough. Perhaps it’s because women of this generation have been sold the idea of a dream they can never really live up to. A dream where they control their careers, their sex lives, and their relationships all at once.

Beautiful young women are never invisible, and being desired for something you had no part in making must be a blessing and a curse. This is a society where we always need more to succeed. More money, more sex, more information. However, people might wonder how prostitutes can put a price on something as intimate as sex. Who do they think they are, using something so precious as their body for material gain? Advertising is constantly telling us that women should use their beauty to get power, but only to a certain extent. Society tries to dictate how far people can use their bodies – for power, or even for security, yes, but certainly not for money. Money, it seems, is dirty in a way that the other two things aren’t. By sleeping with men for money Alicja and Charlotte are defying these limitations. Prostitution becomes the ultimate rebellion.

No answer is easy, and the film certainly doesn’t offer any answer as to how and whether prostitution can be justified. The final scenes of the film leave the viewer with a sense of hopelessness similar to that of the journalist who sits in her vast kitchen with no answers or solutions. Through the eyes of the journalist we learn about these girls’ lives the way she does. Like the journalist with her article, we can watch them on screen, but we can never fully penetrate the motives behind their perfectly organized double lives…

« Previous post
Teona S. Mitevska’s The Woman Who Brushed Off Her Tears (Man on Aspahlt, 2012)
Next post »
Editorial