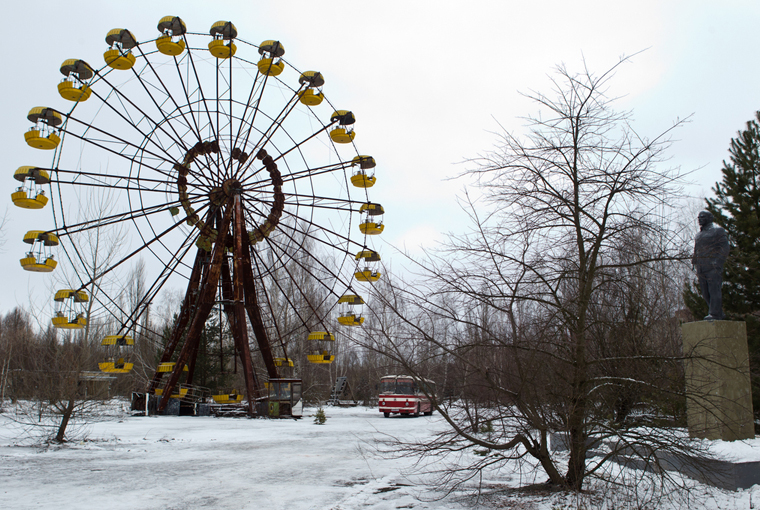 Most of Michale Boganim’s first feature film Land of Oblivion takes place in “the zone”, everything surrounding Chernobyl dangerously infected with radioactivity. In Boganim’s film, however, the forgotten ruins of Prypiat, a small city close to the Chernobyl power plant, have a life of their own. Tourists, nostalgics, a boy looking for his dead father and a fairy-like girl infiltrate the place, all of them caught in an awkward atmosphere of melancholy. If there is a certain dignity coming from the feeling of living somewhere they are not supposed to live, the lifeless sight of industrial ruins adds a toxic touch to their stubborn will to stay.

Boganim’s story sets off just before the explosion of the plant in 1986. A young couple, Anya (Olga Kurylenko) and Piotr (Nikita Emshanov), are about to get married, but the fish in a lake nearby are already swimming dead on the surface. Before they can celebrate, Piotr, a fireman, is called on duty. What nobody knows is that the smoke of the “forest fire” he should have extinguished was actually coming from the power plant. As the news spreads, most people, if at all, are more annoyed than panicking – not even the black rain provokes apocalyptic terror. One man, frantically trying to protect his fellow citizens by handing out umbrellas is considered a lunatic. But luckily he is able to convince his reluctant family to leave.

A decade later, Anya is working as a tourist guide. She escorts curious foreigners through the devastated town, then and now sharing some of her more personal memories. Anya is also learning French, has a French boyfriend and dreams about moving away. This seems the wisest thing to do. Except for the obvious danger of strolling around unprotected in a radioactive town to earn a living, the place where Anya lives in doesn’t really look more livable. One could ask whether Boganim invites us to confuse the two places, or if their resemblance is just a cruel coincidence…

Some unconscious attachment to the past, however, is not letting Anya leave. While she tells everyone – the tourists, the bus driver – that she will soon be living in Paris, she admits to her mother that she is still married (referring to Piotr, her husband who died from radiation). The people Boganim portrays are so attached to their place of origin that they blend out the future. Maybe Anya doesn’t want to leave because her job allows her to travel back in time. The boy who was sent away by his father begins to be trapped by the same homesickness for the past. He starts to inhabit his family’s old apartment for a few days after returning to Pryapiat with his mother to commemorate the loss of his father. Another family is still living in a hut just in front of the skeleton-like apartment blocks of the “zone.” There is also a mysterious girl living amongst the ruins, singing siren songs. Maybe those who hear her melody, like Anya or the boy looking for his father, are cursed to live in an eternal past.

Interestingly, Alxander Mindadze’s recent film, Innocent Saturday, also about Chernobyl, explores a similar dimension. In Innocent Saturday, worker continues with his everyday life, even after having heard from the authorities about the explosion of the plant and about its fatal consequences. Although Mindadze’s film only takes place during the events of 1986, the reaction of his character is exactly like that of Anya and the other character’s in Boganim’s film. They all live in the strange paradox of denying the past, while completely living in it. This is by far the most audacious touch to Boganim’s film. While Anya is not able to fully mourn over her traumatic past, and thus get on with her life in the present, her mourning never ends. The desire to live in a dead city only reflects this status quo. It encourages her to preserve the past, and create an awkward attachment to things that are neither dead nor living.