Postcard from the Land Without Mothers 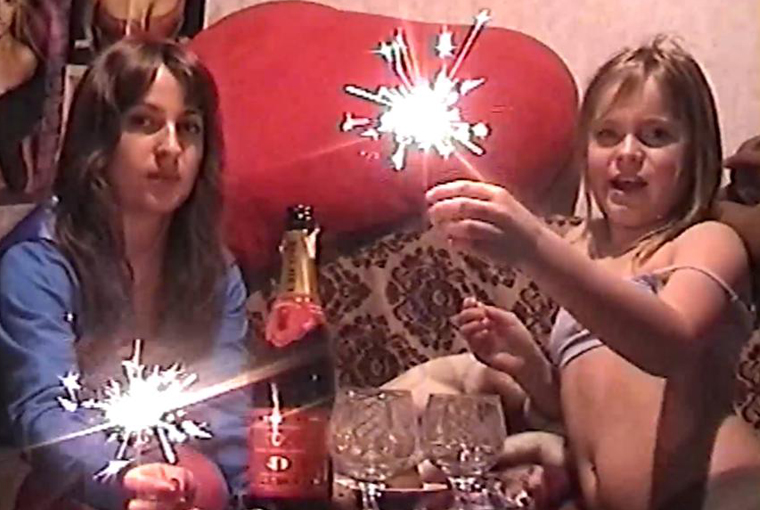 After Moldova became independent in 1991, the transition to capitalism threw the economy into chaos. As a result, a whole generation of mothers left the country to find work in the West, altering the traditional family constellation. Otilia Babara’s documentary Love is Not an Orange tells this story from archives of home movies created in an attempt to keep a feeling of attachment between the women and their children, despite the physical distance.

The film lays out footage spanning the 1990s into the early 2000s. It doesn’t focus on any one family in particular – some recur but others don’t – highlighting the extent of this phenomenon throughout society. This montage approach also makes it possible to pick out trends and recurring themes in what those filming felt compelled to capture as an important moment or something suitably cinematic. Unsurprisingly, birthdays, Christmas and school recitals all feature heavily. In one particularly poignant moment, a group of children is shown singing a song about how much they miss their mothers, which feels horribly staged and forced until one of the girls starts crying.

Visually, this dialogue between absent parent and children is largely one-way, with almost all the screen time filled with the missives sent from Moldova. However, the response of the mothers comes in the form of a fictionalized narrator who adopts the first-person plural to stand in for all the women. Much of their exchange, both in terms of the content and the videos and in general, is centered around the sending of gifts from the new host countries. This seemingly endless stream of presents was intended partially as an attempt to stem the guilt of abandonment but also as proof of the success of the decision to migrate. As an acknowledgement of this, the mothers were duly sent reciprocal videos showing the children opening the packages or interacting with the toys as a sign of their appreciation. These proto-unboxing videos also sometimes serve as feedback or an order form, with the sending being told what to send more of and what less. Later on, this morphs into videos of the houses under construction being paid for by the wages of the hard-earned foreign labor.

Unsurprisingly, there is a significant difference in the tone of the videos depending on whether they are filmed by the fathers or by the children themselves. At the beginning, the children show an understandable difficulty in associating the lens being pointed at them with their absent mother, and as such require a lot of prompting and directing. Over time, however, the idea of using the camera as a direct means of communication becomes more assimilated, and they are addressed directly and fluidly. One of the most memorable clips is of two sisters having fun singing and dancing as they wait for the clock to strike midnight to ring in the New Year. Initially the girls appear to be filming each other for their own amusement, but suddenly one of them turns to the camera with a raised glass to toast their mother, showing the extent to which this idea of the mother as viewer was normalized and integrated within family routines.

As the years pass, the tone of the video messages shifts as it becomes apparent that the women aren’t coming back. The children say they miss them while the husbands tell them to keep sending money. The novelty has worn off, making this means of communication difficult to sustain. In the concluding part of the monologue from the mother’s perspective, the narrator acknowledges the damage caused by the decision to pursue materialist ends at the expense of familial bonds, attempting to heal one generational trauma by unintentionally instigating another.

The title clearly shows the filmmaker’s stance – objects are no replacement for physical presence. Although the similarity with the title of Aliona van der Horst’s documentary Love is Potatoes is most likely coincidental, it’s interesting to note that two female filmmakers chose opposing similes involving food for films trying to grapple with the responses of matriarchal figures to the collapse of the Soviet Union. Indeed, perhaps there is even a consistency between the arguments that love is a potato but not an orange – the former representing the banality of everyday caregiving, the latter a gesture promising change, but without substance.

There is always a richness in personal footage, and Love is Not an Orange makes good use of its treasure trove of footage to create a work that is subtle and moving, with a delicate combination of humor and tragedy.