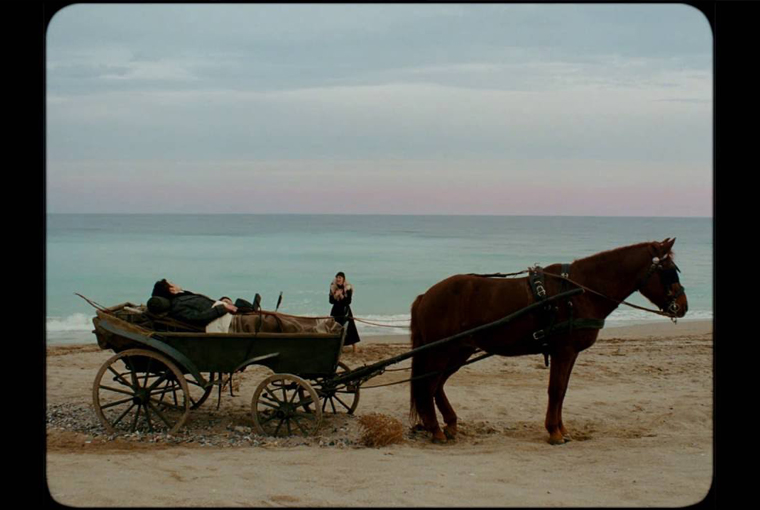 Blending together the fictional and autobiographical writings of Romanian author Max Blecher, Radu Jude’s Scarred Hearts tells the story of Emanuel (Lucian Teodor Rus), Blecher’s Josef K equivalent. The charismatically youthful yet distressingly emaciated student is admitted to a sanatorium by the Black Sea to treat his bone tuberculosis in the late 1930s, and the film charts his adjustment to life as a “professional patient”. After initially being assured a good prospect of recovery, he is initiated into the hospital microcosm by being immobilized by a full body cast and wheeled from place to place on a rickety metal stretcher bed. The scenes alternate between the crushing solitude of Emanuel’s room and the bawdy, boarding school-esque banter of the communal areas, which bristle with a constant exchange of insults and flirtations. (For someone who is unable to move a significant portion of their body, Emanuel gets up to an impressive amount of sexual antics). These two moods are bridged by existential intertitles featuring quotes from Blecher’s texts, flipping between first and third person and reflecting the hybrid nature of the sources used. Bubbling away in the background is the political context of the time, with the concomitant rise of the right in Romania and Hitler in Germany, developments that give Jewish Emanuel justifiable cause for concern.

The moments that will probably linger longest in viewers’ minds are the gruesomely but compellingly detailed medical procedures. We witness the wince-inducing agony of puss being extracted with a terrifyingly large syringe, before moving on to the elaborate preparation of the cast (which takes several days to dry) and the embarrassment of the sponge baths, an intriguingly popular image among the Eastern European films of 2016. Adding a surreal touch to the spectacle are the endearingly glib doctors, who swan around dispensing unsympathetic put-downs and unpromising prognoses while chain smoking à la Mad Men.

The young Rus does an excellent job of embodying the protagonist’s awkward exuberance and desperate yearning to live in the face of his youth being rapidly lost to stultifying confinement. A particularly enthusiastic fellow critic even went so far as to proclaim him a potential Jean-Pierre Léaud for the Romanian New Wave, although whether this comes to pass will of course depend on the roles given to him in the future. As a whole, the cast-ridden cast do very well to animate their characters despite their physical constraints.

What really makes the film superlative, in addition to its overall subtle humanism and unassuming poetry, is its visual approach. The most immediately striking element of this is the choice to use a 4:3 format with rounded corners, evoking an antique photograph. While it may sound gimmicky, it was supposedly chosen by the director to add a sense of height to images that would otherwise be dominated by the horizontality of the beds. Certainly the mise en scène is beautifully crafted, with a captivating depth that may well be accentuated by the decision to crop the sides. With few exceptions, which significantly occur outside the oppressive interiors of the sanatorium, the camera remains steadfastly static, while the action within the frame is often richly layered, revealing glimpses of vivacity at multiple levels. This not only provides a visual treat but also mirrors the boisterous yet bedridden invalids themselves. Special mention must also go to the sumptuous color palette, consisting of duck-egg blues and warm creams. Taken together, these elements give the film a comfortingly familiar mid-century art-house feel, with hints of Powell and Pressburger or Visconti, while managing to avoid derivative mimicry.

The narrative progression will come as little surprise to anyone versed in the classics of the sanatorium-as-metaphor genre, such as the works of Thomas Mann or Dino Buzzati, and the uninitiated can probably make an educated guess. Despite a fairly meandering pace the two-hour screen time doesn’t drag, and the nature of the topic justifies a certain slowness of storytelling (and in any case, the film would be hard pushed to compete with Mann’s Magic Mountain in terms of endlessness). If anything, some parts feel skipped over and indeed a lot of scenes were apparently cut out to make the film less daunting, so perhaps an extended cut may materialize at some point in the future. It would be especially interesting to learn more about the intriguing main female characters, the mysterious Yugoslav Solange (Ivana Mladenović) and the maligned second-choice lover Isa (Ilinca Harnut).

At a very basic level, Scarred Hearts was bound to hold appeal simply because of the nature of its difference, which renders it outstanding in the truest sense. In a torrent of gloomy critiques of modern society, the film grabs attention purely by offering a gloomy critique of pre-World War II Romania. While the details of the socio-historical context may be largely lost on foreign audiences, the themes of loneliness and human frailty will, unfortunately, always be universal and timely. Moreover, the subtext of bubbling right-wing tendencies and rampant ethnic scapegoating makes the film only too apropos for contemporary discussion, but far too few films attempting to do the same thing offer comparable nuance or beauty. After Aferim! (2015) and now Scarred Hearts, there’s nothing to do but wait impatiently to see what the shape-shifting Radu Jude will surprise us with next, and hope it lives up to the standard he’s set for himself.