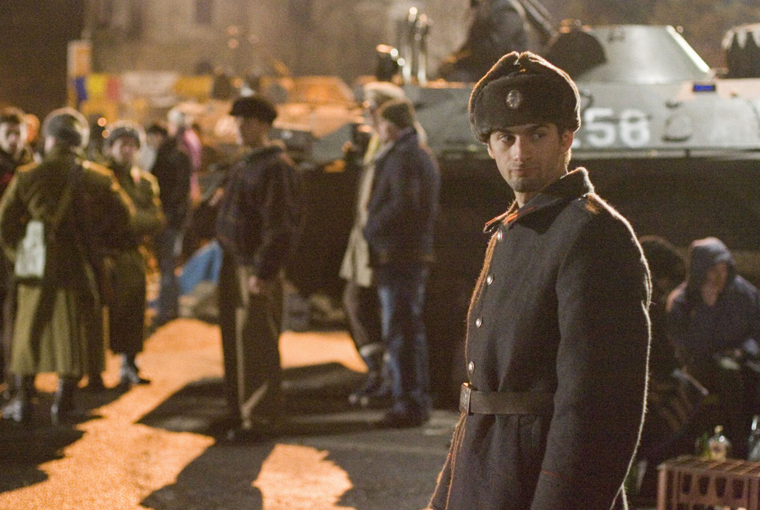 Radu Muntean’s film, The Paper Will Be Blue (Hârtia va fi albastră) follows a military unit in Bucharest on the night of the Romanian Revolution of 1989.Radu Muntean’s film The Paper Will Be Blue is based on a true story. It takes place during the Romanian revolution in 1989 and follows a small unit of soldiers through the night of December 22., just a couple of hours before Ceauşescu’s regime is overthrown. Unsure about who is in charge of the country, the soldiers try to handle the fact that they are about to become expropriated, but generally agree not to rush, for who knows who will be in command tomorrow. However one soldier, Costi (Paul Ipate) disagrees. Instead of killing time smoking, he leaves his squad to fight on the side of the people and heads towards the TV Station, where the more active part of the army is fighting pro-Ceauşescu “terrorists.” He thus reemploys his ownerless “comrades” who will spent the whole night trying to get him back – afraid of the consequences of having a deserter among them. The comrades succeed but their mission is over when they accidentally get shot by another unit that could not make sense of their password (which gives the film a title).

The tragic outcome for the main characters of this film is due to a political quid pro quo. The political order is about to change and to veer its constitutive power. This means that identities occupying this or that position might suddenly inhabit a contrary one, a new one, or entirely loose the recognizability of their place. Because revolutions are sudden, this might happen without the people affected by this change knowing so. Thus a “terrorist” to the state might turn the state into a terrorist when political standpoints shift. Conversely, a guard to the state changes into a revolutionary (hero?) when he switches sides, but might represent a threat to another revolutionary if he forgot to change his uniform, in turn letting the revolutionary seem like a terrorist. Other guards become superfluous when they are unable to define what they are guarding.

This who-is-who-for-whom-turmoil is at the core of Muntean’s film, and Costi, the deserter, will hold almost every imaginable position as the night proceeds. He starts being a guard for the State militia. This makes him a “comrade”, which means that he is addressed as part of a communist system which he is supposed to secure as a job. Aware of the change that is going on, he tries to get rid of holding that place. After leaving his unity, he joins a group of revolutionaries, who recognize that he must be on their side, calling him “brother”, which permits him to feel as one of them. Next he ends up in the suburbs helping protestors to hold their position against “terrorists”, terrorists being resisting military forces. He thus turns into a “soldier” again, but this time fighting on the other side. But then he turns into a “terrorist” himself, when the revolutionaries notice the uniform under his polyester jacket. So far he held the positions of a guard, a revolutionary, a terrorist and is imprisoned at last to clarify what exactly he is. Ironically the protesters call Costi’s mother to find an answer, and it is this call that allows him to go home. He thus turns back into a son, the only sure attribute, perhaps, this night could provide for him. This shift of positions, from the embodiment of state authority over its catachresis and to the return to its most elementary recognizable appellation, marks the linguistic chaos of the revolution.

However Costi is rebaptized into his military unit and dies. Symbolically at least, this death makes sense because he is reintegrated into a structure having no existence anymore. Ironically though, he is killed by that same structure, whose inability to understand itself thus results into a paradoxical defensive mechanism against any lack of understanding – which would explain its self-destruction. But the tragic side of Costi’s death is that he, at least partly, realized that his political position does no longer make sense, while his “comrades” continue to occupy their place, making them look as though they are still acting a role in a play even though the curtain has just come down.

But can the symbolic erasure of the language system be read as the suspension of the political system? Or does it not show, after all, that the domination of any language system cannot be muted but only back-talked and hence, that the interest any system implies, cannot be escaped?

We have seen that words such as “terrorist”, “communist”, “enemy”, and “brother” are still in control. No matter what contradictory positions they occupy, they intimidate the people who use them, which means that it would be confusing to describe such a condition as “free” or “freeing.” The Paper Will Be Blue shows that history cannot break with discourse. A revolution is not able to change language when it is unable to redefine the interior of the words it uses. Hence, the quid pro quos do not resolve to give new meaning, but show that meaning wasn’t there from the start, that meaning got lost, that it was scarified to the interests of this or that system. This allows a person like Costi to appear at once as friend and enemy without contradiction because both catchwords follow the same interest: create the image of an identifiable friend/enemy.

Consider the distinction between friend/enemy: If a friend is someone who helps his friends for example, Costi is never asked how he might help, and his efforts to help are not recognized. They are helpless. On the other hand, if an enemy is someone who harms his enemies, Costi does not harm anyone and his attempts to do so are not recognized. They are harmless. But as long as he is identifiable and as long as he identifies nobody seems to bother and ask: “What is an enemy?” or “What is a friend?”. It is this imperative, to identify at all costs, that kills Costi and that shows that revolutions do not suspend language systems but reveal their power. Costi’s death does not represent the necessary loss of a body that was inseparably attached to an outdated idea, but gives away the power ideas can have over bodies, which is a power revolution fails to undermine.

The darkness of events in Muntean’s film enhances the impossibility to see what might linger behind things. Boogie, Muntean’s film after The Paper Will Be Blue, takes up a similar theme. Here too, a misunderstanding is at the core of the story stiring up the relationship of a young couple. Like The Paper Will Be Blue, Boogie is shot at night, which doesn’t clarify the misunderstandings but allows its characters to drive deeper inside the obscurity of their positions. Both sides hold on to something that is hardly visible – an idea, a possibility to identify with something meaningless, instead of using the lack of identification to reconsider and redefine the meaning of their relationship. But while disaster announces the dawn of The Paper Will Be Blue, Boogie ends with a “construction site”, which gives us the hope that these characters are willing to ask: “what is a friend?”. 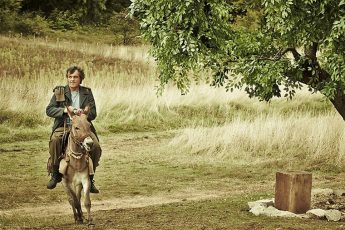 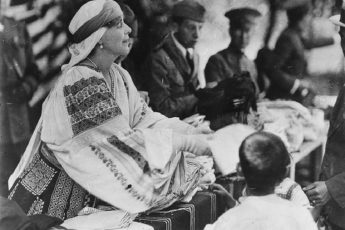