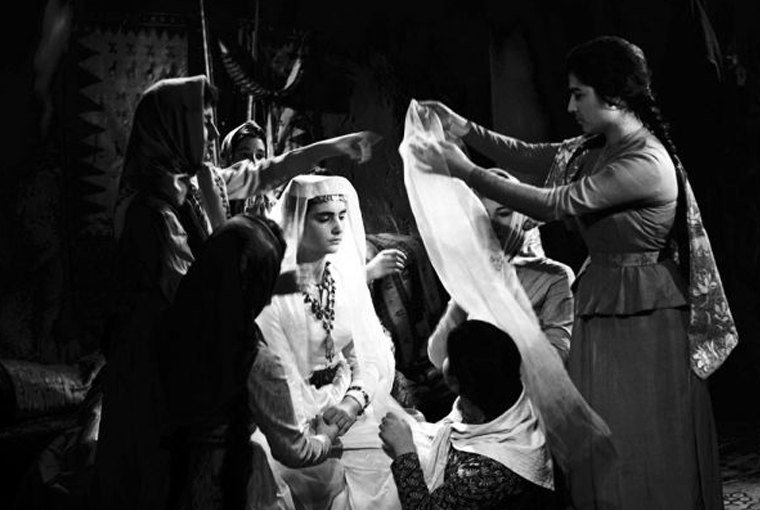 When a disastrous earthquake spares the families of tailor Barchudar (Hovhannes Abelyan) and potter Hajrapet (Avet Avetisyan), the two neighbors decide to seal their friendship by way of blood ties: “God protected our children and destroyed the wall that stood between us. We must not defy his will.” Barchudar swears that he will let Hajrapat’s son marry his daughter once they come of age, and Hajrapat happily agrees. So does Seryan (Samuel Mkrtchyan), the groom-to-be, until he’s confronted with the fact that according to tradition, any unmarried female must not let herself be seen by men once she has reached adulthood – not even by her fiancée. Seryan grows increasingly impatient with that dictate, and finally seizes the chance to fall into Susan’s arms when he spots her taking a stroll. This only aggravates his longing for love, so that Seryan takes ever bolder steps to try and meet Susan (M. Shahubatyan-Tatieva). A vespertine, Romeo-like visit on Susan’s doorstep does not elude the watchful eye of Barchudar, however, who is furious to be “ridiculed in front of the whole town”. He steps back from his promise to let Seryan marry Susan and decides to find a fit husband for her.

Both the process of finding a new partner for Susan and the wedding itself allow Beknazarian to exploit his stylistic mastery to the fullest. In a single tavern scene he has us amused at an altercation between innkeeper and guest, invested in a large-scale brawl, and finally grieving Seryan’s tragic fate. The latter marks the path that the film finally takes, as Seryan is, now as before, unwilling to accept his fate (unlike Susan, who, though similarly unhappy in her marriage, accepts the role that has been bestowed upon her). Failing to take away Susan from her new husband Rustam (Hrachia Nersisyan) by force, Seryan is driven first to despair, and then to another, fatal attempt to separate the newlyweds with a cunning lie…

If Beknazarian’s characters seldom trespass the rough characterization with which they are introduced – it is e.g. unclear what more could be said about Barkhudar’s nature than that he is a stern man of honor, which is exactly what the first title card says he is -, Namus miraculously remains convincing in spite of its see-through dramaturgy. The comedic talent of Hambartsum Khachanyan in the role of Badal, Barkhudar’s good-for-nothing son and apprentice, is exemplary for the way Beknazarian has us forgive cliché thanks to the way it is put into practice.1 This sheer craftiness, impressive in itself, gains further notoriety when one learns that Namus is considered to be the first Armenian feature – the film was shot at the Armenfilm studio (then known as “Gosfotkino”), which was set up in Yerevan in 1923, just two years after the Soviet invasion of Armenia, Azerbaijan and Georgia, and only three years before Namus was released.

Even a brief look at Beknazarian’s palmy career within Soviet ranks suggests that Moscow did not only like him for his aesthetics, but Namus is also a prime example for the way Party-conform films from the Soviet Union could exceed, in both scope and complexity, their overall didactic mission. Beknazarian says he intended his film as a critique of tradition from the perspective of “modern” society, and it’s hard to dispute that this recurrent theme of Soviet propaganda is integral to Namus as well. Yet Soviet ideologists and directors were quick to see that that dialectic could not be framed as a simple either and or, as few, if any of the Soviet peoples, would have been ready to simply give up their customs in favor of a culturally neutral way of life. Many artists were thus allowed to walk the thin line between acknowledging tradition and putting it above the integral norms of Soviet ideology, with Beknazarian proving to be an early master of this delicate balancing act: what Namus problematizes aren’t traditions as such, but mainly the values with which they correspond. The former figures in such variety that Beknazarian’s film in fact calls into question whether we know what it would mean to give up all our traditions – how can we not sing our songs, dance our dances, eat our food, wear our clothes, play our games… live our lives?

Of course, this is not to say that the norms put forward by our traditions always accord with our inclinations, or that those norms in themselves are consistent to begin with. When Barchudar steps back from his promise because Sejran has ignored their ancestors’ customs, Barchudar is thereby himself breaking his vow on the bible; keeping in line with one system of rules makes him violate another. It’s also clear that Barchudar, like Sejran, who refers to the bible to dispute that decision, is appealing to just those rules which will accord with his immediate goals. Instead of arguing that “honor” is outdated, Beknazarian shows that it is applied in an arbitrary, ultimately contradictory way – no point in fending off modernity through an appeal to purity if the latter’s an illusion.

It’s worth pointing out that the original title, “namus”, is not easily translatable into English. Strictly speaking, it is not synonymous with “honor” (which is roughly how it was translated into French and German), but rather connotes an ancient, originally oriental kind of honor which is tied to a woman’s chastity. Thus, a family’s namus is specifically violated when one of its female members has extramarital intercourse. If this explains why Susan’s sexuality figures as a recurrent topic in the altercations between Rustam and her, it is also true that Sejran, though ignorant of that custom, perceives himself as a man of honor regardless. In other words, it’s both namus, the patriarchal, culturally specific kind of honor, and honor more generally understood, which Beknazarian frames as condemnable.

What, then, should we make of those traditions that are compatible with a “modern” perspective of the world? And how should they be disjoined from the obsolete norms they are undeniably affiliated with? How, in other words, can we redefine our identity without supplanting it? – Perhaps, these are too difficult questions for a film to answer completely, though Namus does implicitly point to a tentative reply. After all, its project is purely negative – Beknazarian invites us to keep our traditions, and throw away our norms. Instead of asking us to change our conception of them, reshape our traditions so as to become compatible with the way we perceive the world today (Protestantism seems to have shown that this is something not logically impossible), Namus suggests that the correct way for tradition to survive is by becoming purely ornamental. Which of course leads to the kind of dogmatic, purely nominal conception of religion and tradition that can really be found in many Eastern European countries even today, and which makes it easier for Communism, Capitalism and whatnot to be adjusted to our identity and values because our identity and values are now compatible with everything. Surely the strong conception of honor that Beknazarian’s characters act upon is worth getting rid of, but one should be weary of throwing out too much out of the window as a result. That Barchudar and Serjan are wrong doesn’t mean that Beknazarian is right.