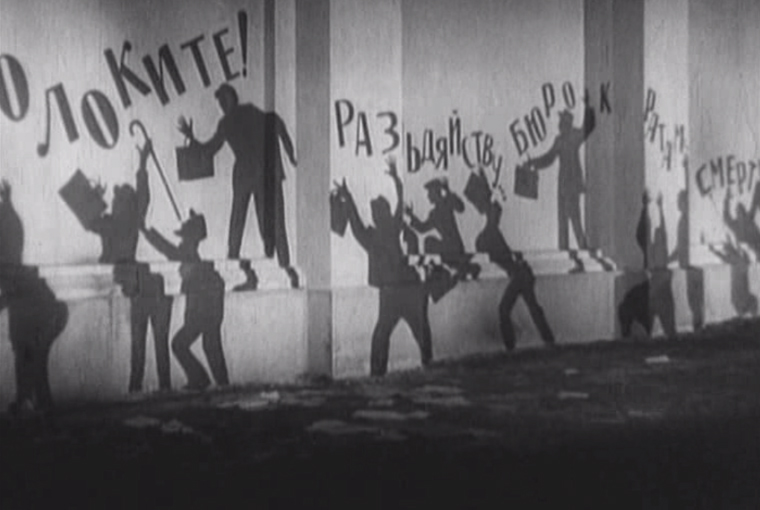 Kote Mikaberidze’s My Grandmother is easier to look at as an explosion of experimental energy, channeled through every available camera trick and editing technique, than as a coherent film. It’s a thrillingly odd expression of its time – the short-lived exuberance of the Soviet avant-garde before it was labeled as “formalism” and strangled to death to clear the way for Socialist Realism.

It’s impractical to catalog here all the ways in which My Grandmother startles and bemuses. To relate the plot simply – which is a disservice to the film’s zigzagging structure – a manager (played by Aleksandre Takaishvili) is fired from his comfortable job when a caricature of him appears in the youth newspaper, excoriating his notorious laziness. On the advice of his ex-colleague, the unemployed manager sets out to find himself a “grandmother” – that is, an influential bureaucratic patron. When he finally obtains a letter of recommendation from an unwilling “grandmother” (by driving an unfortunate bigwig insane until he complies), the ex-manager cockily presents his credentials to a prospective boss – only, in a climax of bravura surrealism, for the director to blink out of existence, to be replaced by a different man, who also disappears when the ex-manager tries to hand him the recommendation letter, and so on through half a dozen directors. The “final boss” is an imposing worker (Akaki Khorava) who finally reads the note. But the letter merely instructs him to throw the scoundrel ex-manager into the street. In the film’s quite alarming conclusion, the worker bellows in rage, all the office workers flee and transform into shadows plastered on the wall under the words DEATH TO RED TAPE, TO SLOPPINESS AND TO BUREAUCRATS.

My Grandmother’s plot might have seemed “safe” to Mikaberidze and his collaborators at the time: after all, it excoriates inefficiency while raising the proletariat worker to the status of an annihilating god. But, as Denise J. Youngblood has pointed out, the film was not only too formalist but also too negative for the regime: “[T]here are no healthy role models or images of what the new, truly revolutionary way of life would look like.”1

Not only that, but the very hyperbole of the film – the utter absurdity of its characters, the frequent breaks in action to introduce some new technique such as puppetry or superimposition, the lack of any clear trajectory and the deviations toward Punch-and-Judyesque comedy – undermines the existence of a coherent political message at all. Instead of tending towards a point, the film is structured around paroxysms.

Of these, the most unforgettable is the entrance of Bella Cherneva as the ex-manager’s wife into the bourgeois apartment where the unemployed man has just practiced hanging himself. Oblivious to her husband dangling from the ceiling, the man’s wife and daughter burst in laden with shopping bags from the black market, frenetically dancing the Charleston. Meanwhile, stop-motion-animated toys hoot and gesticulate on the floor in response. The dance lasts a good minute before the ex-manager, grimacing, lowers himself from the ceiling; even then, Cherneva is still flailing rhythmically. Of course, the scene parodies the stereotype of the bourgeois wife with luxurious tastes. But the sheer violent expenditure of energy, both in her movements and in the rapid cuts, is almost shocking.

Another paroxysm interrupts the plot at the end of the film. Having read the letter that will doom the ex-manager, the imposing worker breaks into laughter. The ex-manager, his wife, and all the office workers respond in kind. Cutting accelerates between close-up, laughing faces until each shot is a fraction of a second long. Suddenly, the worker’s face goes blank, a prelude to his outburst of rage that terminates the film (and, presumably, the entire firm’s staff).

These climaxes have a remarkably modern comic effect, the very excess becoming a joke on the very notion of plot structure and continuity. But, knowing the fate of the Soviet avant-garde, it’s difficult to watch the hysteria without a feeling of foreboding. Obviously, My Grandmother could in no way have anticipated the horrors of the next decade. But in its comical pursuit of the extreme, the film foams itself up into a near-apocalyptic vision. Carnage is decreed by a supreme worker who is impossible to amuse, and he is the only audience that counts. 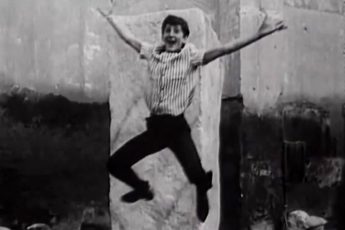