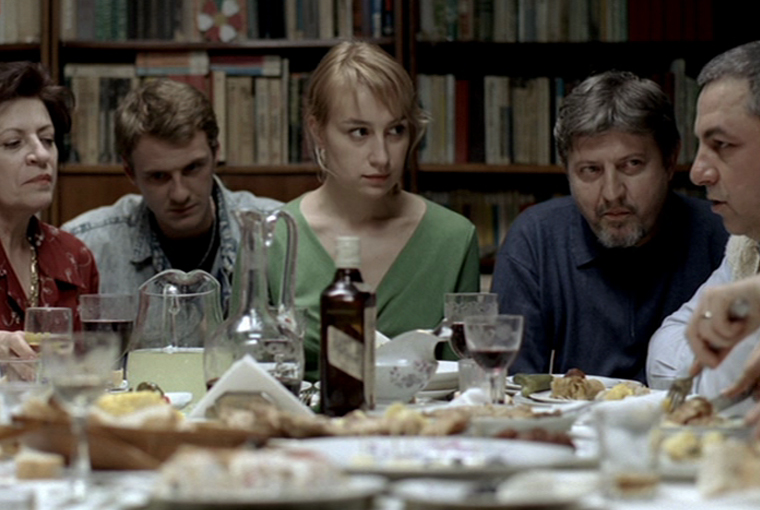 In last month’s editorial, we noted how Otar Iosseliani’s Pastorale uses the theme of music and its collective character in particular to launch a large-scale attack on urban individualism – an anti-Soviet critique that we think easily applies to capitalism as well. For a film originating from Georgia, where traditional music is polyphonic and thus an inherently collective practice, this seems like a logical use of music as a symbol, and it could also seem like food – our theme for this month’s issue – is similarly rife with definite connotations. While our discussion of Caucasian and Balkan films through the perspective of food has indeed yielded some familiar motives, notably those of collectivism or national identity, we have also payed special attention to the way these associations are challenged and surmounted by the very directors deploying them. Together with remote symbolical connections, like those between food and memory or food and social destitution, such reevaluations have deep implications for a better understanding of the nature of symbols. Interested primarily in the specific theme of food, this month’s issue thus also seeks to ask what the semantic boundaries (if any) of symbols are, and how these have been pushed by artists, academics, intellectuals, politicians, religious authorities and not least by society as a whole.

In his extensive genealogy of the pomegranate, Moritz Pfeifer retraces the different connotations and ritual functions of the fruit to seek out what explains its dialectical application in Parajanov’s Caucasian Trilogy. Konstanty Kuzma turned to another Caucasian classic, Otar Iosseliani’s Falling Leaves, to examine the way the supra – Georgian table culture – is deployed to contrast two ways of life, urban traditionalism and Soviet-inspired individualism. Kuzma also spoke to German anthropologist Florian Mühlfried, who wrote his dissertation on the supra and who shares some of his thoughts on its artistic and political dimensions. Meanwhile, Ana Grgić and Julia Zelman turned their attention the Balkans. Grgić examines the way food can function as transnational recollection object in local films, while Zelman sees its insertion in Romanian cinema as being associated with a critique of political and social reality.