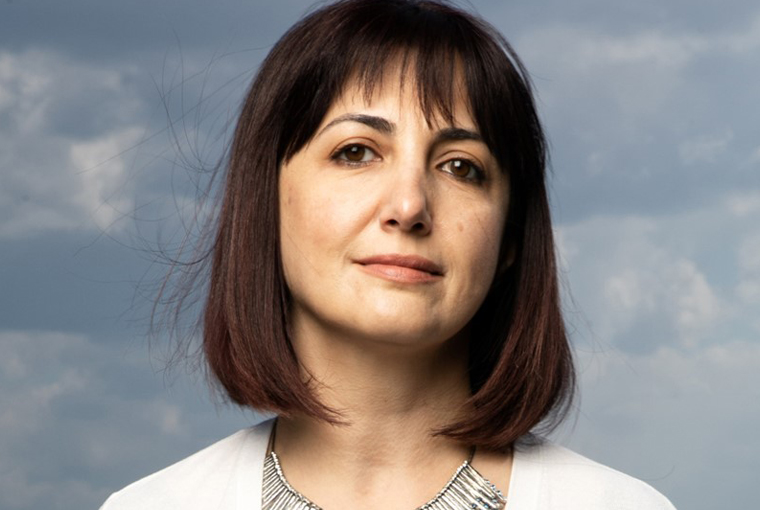 We met Armenian filmmaker Inna Sahakyan during the 19th Golden Apricot Yerevan International Film Festival (July 10-17) to speak about her animated documentary “Aurora’s Sunrise” (2022). The film follows the peculiar story of Aurora, a survivor of the Armenian genocide, and went on to win the Silver Apricot in the International Competition in Yerevan. We spoke about the long process behind the project, the mysterious loss of a silent film, and Aurora’s remarkable fight against forgetfulness.

To begin with, your narrative, based on a true story, is just astonishing. Only 14 years old, Aurora Mardiganian survives the horrors of the Armenian genocide, makes her way to America, and ends up in Hollywood. Is this a well-known story in your country? How did you discover it?

At the time, I was conducting research for another project we wanted to do – the idea was to make a documentary with 10 animated short stories based on the testimonies of Armenian Genocide survivors. We were conducting research, planning to release that series to commemorate the 100th anniversary of the genocide.

And while I was researching that project, I was looking through the testimonies of genocide survivors recorded by the Zoryan Institute, a North American nonprofit organization. They suggested to also watch Aurora Mardiganian’s testimony – and it was totally different, and the story was different too. That was in 2014, early 2015, and I had barely known her story before then.

And this series was meant to be shown on Armenian TV?

No, as a documentary film studio we were developing our own project. It was supposed to be a 90-minute creative documentary which we didn’t realize in the end. Because then we decided to focus on Aurora’s story. Maybe one day we will return to the initial project but basically Aurora took the place of that film – because when I listened to her story, I was like, oh my god, this was so interesting, her story was so unique.

Even as a nation we don’t know her story that well. I mean, that should really be told to everyone, and it couldn’t simply be one of many short films. We brainstormed as a team and understood that it had to be a separate film, a feature documentary.

What really struck me is this mix between archival material and animation. How did this come together, what was the filmmaking process like?

Oh, that was very, very complicated. The whole process of the film was very complicated, starting with the funding, which is still very low for a European co-production. Due to the production circumstances and the creative process, it took us about 7 or 8 years to complete the film.

Animation is something that can give all these shades to a story, you know, you can move from being a child to the stress of a teenager to the experience of a woman. All of this you can beautifully achieve through animation. The second important aspect for me in animation is the symbols that you can use. You can rely on indirect storytelling through symbols and colors, which help detach viewers from the tragedy – which would otherwise be super heavy.

I think that both the story and the memories can be related much more vividly with the help of animation. That was clear from the very beginning, but then of course we needed to fill the rest. So, just to give you an idea of how I worked: the first step was to build the story, of course we did deep research on that.

I discovered a lot of new information that was not even known to the scholars who had been working on Aurora before. That was because by the time I started researching, a lot of American libraries were available online, so I had much more access than earlier scholars. First came the research, then I built up the story based on her interviews.

Who actually conducted these interviews?

The most extensive interview was made by the Zoryan Institute that I mentioned before. They started to record genocide survivors’ testimonies in the late 1970s and early 80s. The project was meant to document evidence from actual survivors. They were just asking standard questions, you know. And two more interviews were from the Armenian Film Foundation – they were shorter, but it was great that they did the recordings on 8mm tapes, that way it is color footage of high quality.

Yeah, so I had these three interviews as a basis for me to build up the storyline. Having researched her life and listened to her testimonies, I thought to myself: what is the story, what is she telling us? In my first timeline of editing, we only inserted the interviews; some space needed to be filled with the rest of the story. Then, of course, we started to research archival footage and we restored the 18 minutes of footage that had survived from the silent movie that Aurora herself was starring in [Oscar Apfel’s Auction of Souls, a silent picture about the Armenian genocide made in 1919 for the Armenian Relief Committee].

…which got lost under such mysterious circumstances. Do you know anything about that?

Oh, that’s a long and separate story. There are theories among scholars that the negatives of the movie were most likely intentionally destroyed. Back in the 1920s, the film was really popular, and it was shown in so many cinemas all over the world that for every screening they must have prepared another physical copy. Therefore, many reels should have been produced, yet none of them survived.

This might have been for several reasons, one of them is simply time, because if the tapes are not stored properly, they wither away; the second possible explanation are political reasons, such as a Turkish lobby. I don’t know the answers, there are these different theories. The fact of the matter is that the surviving footage was discovered as late as 1994 in the Armenian National Archives. That’s another long, long story.

Since the 1950s, the fragment was kept in the archive under another name, but we didn’t know that these were sequences from Auction of Souls. It was edited onto a tape with different material. In 1994, one scholar realized that the 18-minute fragment was from Auction of Souls, so this is the way that this tape was discovered. But the film was kept on a bad quality 16mm tape because it was the copy of a copy of a copy. Since this was the only “original” we could find, we rescanned and restored the 16mm material and now it’s part of our film.

For the animation itself – it’s a very long story again, like everything – we experimented with several different styles, but then we understood that we first need to do the filming of the main scenes in front of green screens so that we have some reference for the animators. This is not rotoscope animation, but the animators worked with our references for the movements; so we first filmed everything, then edited and finally gave this footage to the animators and illustrators.

Ah, interesting, so you worked with actors on every scene.

And the drawings are remarkable, they almost look like watercolor…

The artists used Photoshop for illustration, they are from both Armenia and Lithuania because the film was co-produced between Armenia, Germany, and Lithuania. The main art direction was from Armenia where I worked with the young animator Tigran Arakelyan. The illustration and animation work was divided between an Armenian and a Lithuanian team. For example, developing the background style and the characters was done by Lithuanian artists.

There’s another thing I wanted to ask. I found it really interesting that your film is also about the process of making a film – our main character, Aurora, is involved in the production of Auction of Souls, and there’s this moment when we realize how painful this whole experience is for her, and how exploitative Hollywood is. Through making the film, she has to relive her trauma again and again. That’s maybe a bit of a personal question, but it must have been painful to make this movie for you as an Armenian team as well, right?

To be honest, the whole film is very heavy. And I can’t watch it anymore, after so many years of working on it, I find it very hard to even rewatch. I really appreciate Aurora’s act because for me it’s an act of sacrifice. She approached that work – she’s talking about that in her testimonies – fully aware of how difficult it would be for her, but also understanding that the payoff would be that she can help others.

I think that’s the most important idea of my film too: that, despite everything she lived through, all the horrors or the inhumanity around her, she stayed human – and even sacrificed her youth. It is well-known that any genocide survivor is just trying to totally forget what happened to them, you know, to be able to live. They usually only start to remember it in the last years of their life, but she specifically chose not only to remember it, but also to talk about it, then act in the film, then rewatch the film all the time and to keep answering questions. And she was doing so because she understood that this would result in her helping other orphans to find shelters and to be safe. So that’s the most important storyline in the film for me.

Aurora was very impressive, especially in the interviews. And she really never found her brother again?

No, at least not as far as we know. Most likely, as she also mentions in her interviews, he moved to another country and that was the reason that she never met him again. But in the end, and this is another amazing turn of the story, she saw her sister again.