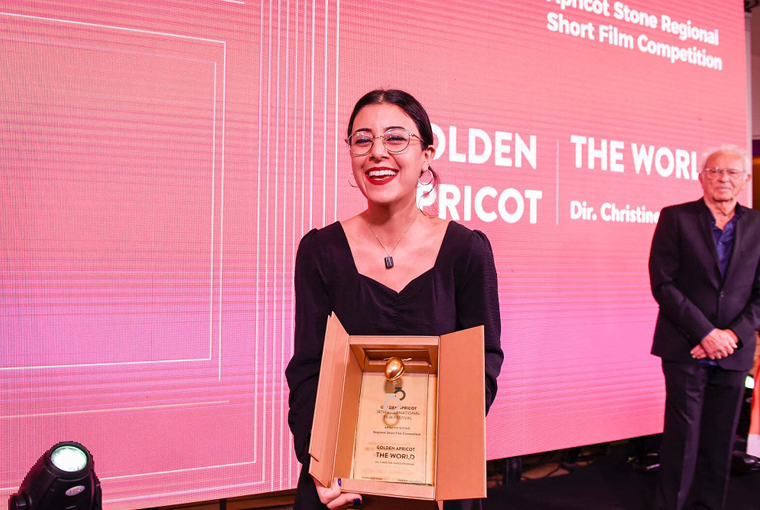 We met Los Angeles-based filmmaker Christine Haroutounian during the Golden Apricot Film Festival 2021 (October 3-10), where her film “World” won the regional short competition. The short tells the story of a young woman returning to her native village to tend to her sick mother. Haroutounian speaks about the idea behind her film and discusses what it is like to navigate Los Angeles and her Armenian heritage.

You chose a word for the title of your short film which is very open to personal interpretations. Relatedly, a circle appears in the final shot of your film, adding another enigmatic element to the film. Can you elaborate on this mystical element of the film?

I don’t know if I agree with the word “mystical”, but I believe in the power of mystique. Extrapolating on the title and the last shot would take away from that. I am also quite opposed to symbolism. As a filmmaker I am more interested in finding truth in sensory experience, not in directing a certain type of agenda through symbolism. That’s for the viewer to find.

World is a film about one’s duty, especially a woman’s duty. I felt that many of the domestic short films that were screened at the Golden Apricot Film Festival were characterized by a sense of “duty” towards Armenia. Do you share that observation?

“Duty” is a central problem that a lot of Armenians have to grapple with considering our difficult history and the present moment, which is still marked by war. There were indeed literal depictions of “duty” in some of the other films, for example, about serving in the military. Living outside of Armenia and being at the same time psychically linked to it, this concept of duty has different consequences: how do you retain your mother tongue, how do you retain this culture, to pass it along? How do you “survive” what a lot of Armenians call “white genocide” or assimilation? Those things flutter subconsciously in my life, and can suddenly explode, very explicitly.

Yet I didn’t sit down to make a film that could be framed as a “diasporic woman coming back to take care of her mother”. For me it is much more instinctual and intuitive. So the theme of duty in my film is personal. I also try to suppress my intellect when I am writing because I don’t want the “thinking mind” to occupy a big place in my work. What I am really conscious of however, is form. I studied photography and working with a visual language is very natural for me, it is something that I immediately understand and that I don’t process verbally. Every shot is conceived before I shoot the film. The film is complete in my mind’s eye before it is shot. If I follow a pre-conceived morality or agenda, I will get stuck with reasoning. What matters most is what my intuition communicates, what feels correct. I have to be honest about whatever comes up.

In the past few years, there’s been a shift in the cinematic landscape in the sense that there are more “female directors” and more feminist narratives. Have you followed that development, and do you yourself pursue a feminist agenda?

My focus is on the broader view of human action, not on any type of psychology or ideology. Nowadays, there is an emphasis on psychologizing everything, and the need to know “why” a person acts in a certain way. But that’s not how I experience life. There is the belief that we have to show why a certain character is tormented, what happened to this person leading up to this moment. For me that is pretty irrelevant. It has more to do with satisfying an artificial dramatic element.

What is more truthful is that people don’t disclose how they really feel. We can be very close to some people in our lives and rationalize their feelings, but there is an entire part of them that will never be known to us and there is both great pleasure and deep frustration in that. I am interested in living in this kind of tension. World is not a “family drama” because it’s not about the specifics of this one mother and this one daughter. It’s archetypal.

The project departed from a string of images that came to me. I wrote them down not knowing what they would turn into. In those images, Claudette appeared, and her voice became very clear to me. I was shocked and scared by her potency, so it was more about following a specific voice than saying to myself that I am going to explore womanhood. She was presented so clearly in my mind that I wrote many journal entries in her voice, although I ultimately threw them away because they would offer conventional explanations. What spoke to me was more experiential, like a circle: I was in a loop with Claudette, a loop of ritual, banality, and avoidance.

I think that women, and ultimately all humans, have incorrect feelings that are not allowed to be explored or even admitted, especially in the realm of death and care-taking. I’ve had a lot of men tell me they had similar experiences when they lost their mothers.

You said in an interview that you feel “spiritually vacant” in Los Angeles, and that while many believe that there is a lot of corruption and romanticism in Armenia, this is also true of Los Angeles. Are you implying that there are some common elements between Los Angeles and Armenia? Also, has growing up in Los Angeles with an Armenian background influenced your film?

Both places engage with a romanticism that flirts with delusion, or requires it. I don’t understand how people who constantly say that “Armenia is a corrupt place” don’t ever characterize Los Angeles this way. I am not downplaying the corruption in Armenia, it has cost people their lives and livelihoods. But it exists everywhere. These same people don’t want to recognize the systems of corruption in Los Angeles. Maybe they can’t even see it, or they find excuses for it.

I guess that the film could be set anywhere in the world, but I am very spiritually connected to Armenia and had to make it there. Its landscape is generative in a very unique way, at least for now.

Growing up in LA, I had to digest painful images of Armenia and its abject history, and somehow reconcile that with a very suburban childhood. In many ways, having a connection to Armenia is how I learned how to dream. I was born into a liminal space, and it is all I have known­­­­ – these constant negotiations. The diaspora is a rich environment to live in, and extremely uncomfortable at the same time. I have to look at everything from the outside, but then again that’s the position of any artist.

World can also be seen as a coming-of-age film. Both learning to cope with death and sexual experiences take up a special place in that process in your film. Does sex contribute to Claudette’s procedure of growing up, or does it undermine it? Does it only function for her as a mechanism of escape?

Claudette has retreated so deeply into herself and is arrested in this process of becoming. It kind of goes back to this ritual of banality and avoidance, while living through something that feels like there is no way out. I needed to have her incorrect feelings unfurl fully, without judgment. It was my way of freeing her, of giving her the permission when no one else did. I don’t want to reduce her sexuality to a symptom or impose any kind of morality.

Grief definitely looks different for everyone. I wouldn’t say the mother-daughter dynamic is non-reciprocal. The mother has an outsized presence in Claudette’s life, even though she barely communicates with her. She has tremendous power, and whatever the mother does say, which end up being her last words to her child, is hard to hear. This is the person who made Claudette, and now Claudette is on her own. The more she tries to be in denial and escape, the more defined she is by it all.

I found the use of nature very interesting, including the beautiful yet morbid depiction of animals, shown either already dead or destined to die. What’s your personal relationship to nature? How does this relationship affect your filmmaking?

I grew up in a massive, sprawling metropolitan city, albeit in a bucolic neighborhood. I enjoy long walks and getting lost on purpose, feeling the sun on my skin, taking in the sounds especially. I like to garden. But maybe that’s just being outside, rather than being in “nature”, which I can feel intimidated by. Nature is so much bigger than me.

The chicken in the film, for example, is part of a pagan ritual that is still being performed and that has been adopted by the church. You visit a farmer and slaughter an animal. The meat is then shared with family or the needy to honor a blessing or present a prayer through communal thanksgiving. Someone performed this at the cemetery when we were shooting that day, and we captured it. Witnessing the sacrifice feels extreme because I don’t have this relationship to nature in my day-to-day life. I saw it is an authentic primal and spiritual interruption, which is a rarity.

I don’t like to personify nature, which would be to try and tame something of absolute life-affirming awe and beauty. Even in a film with so much grief, there is life pulsating throughout it. That beauty is available to you if you look close enough.

Let’s return a bit to this mystical element. Are you planning to continue to make films in the same direction? Is there a particular subject that you are exploring right now?

I don’t know if there is a conscious continuation in a specific direction, but I continue to follow my instincts and intuitions. I’m working on a short and on my debut feature, which are both set in Armenia. The short follows brothers who are haunted by an image near a lake. My debut feature is a coming-of-age odyssey that centers around a young girl who is in search of her father, a well-driller, whose death is kept a secret to her by her family.

Do you want to say a bit more about this intuitive process that you’re referring to?

I don’t know how it works for me, it’s just there. I think there is a deep intelligence within everyone’s intuition. It is just a matter of fully listening to it and being completely honest with oneself. 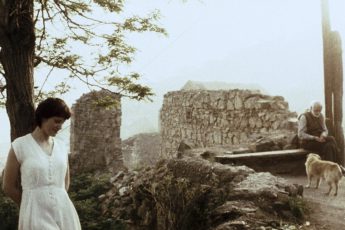