The Form of Grief 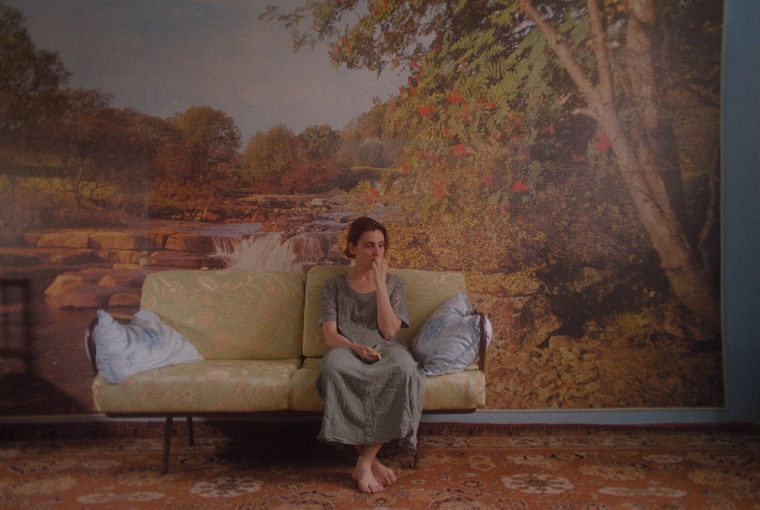 Christine Haroutounian’s World is a film about coping with grief. The story follows Claudette, a young woman who has returned to her hometown along with her sick mother. The village where the film is set is situated in a remote mountainscape. In this “shithole”, as Claudette characterizes her hometown, everything seems to stand still and sit quiet in a beautiful yet somehow disquieting way, like a day in the middle of the summer that is filled with both beauty and ennui.

While I was watching World, I felt a sensation I hadn’t felt since my childhood summers on the island of Crete, when everything felt endless. The soundtrack of my summers back then was the ceaseless song of the cicadas. The cicadas are supposed to only live for about a month in warm and dry areas, and in the hottest hours their song is stronger than ever, monotonous yet joyful. The soundtrack of World, on the other hand, is delivered by the quiet yet insistent humming of flies. Flies are insects that are associated with summer but also with death. They appear during hot days and gravitate towards dead bodies, either of humans or animals. Besides flies, there are other creatures from the countryside that appear in the film. Usually, they appear when already dead or as destined to die – fish soon to be fried, or a herd of beef cattle. These animals are employed to complete the depiction of the countryside in its natural state. Christine Haroutounian has told me that the animals, especially the chicken, are intended to recreate a feeling of banality in the film. (Their morbid depiction is also a reflection of the fact that in small communities the everyday killing of animals is an act of offering among the members.) The banality of these scenes is further enhanced by a sense of motionlessness that is conveyed by the film’s direction and cinematography. The film prioritizes long shots, while its stylized photography has a touch of retro aesthetic. In an indoor shot, Claudette (played by Hasmik Hovian) sits on the sofa under a naturalistic painting, dressed in a plain gray dress. In this shot, Claudette resembles Alice from Lewis Carroll’s tale: preoccupied with her thoughts and biting her nails, it seems as if she were trying to figure out what the environment is she suddenly found herself in.

The short film portrays a mother-daughter dynamic that is both uneasy and common. The mother (Marieta Sargsyan) lies sick in bed. Without the slightest appetite, it looks like her days are almost over. A neighbor brings food for her but Claudette refuses to receive it, saying that her mother has no appetite, an action that angers the woman who then says, meaningfully, “your mother was right about you”. She seems to imply that Claudette has a reputation in the village of not being a “proper caretaker” of her mother. At some point her mother calls Claudette by her father’s name. Claudette enters the bedroom enraged and reminds her of her actual name. Despite the fact that her mother’s ability to communicate is limited, Claudette is still triggered by the false name-calling. We can assume that there is a background story to this reaction or that, probably, it wasn’t the first time that the mother confused the family names. The mother’s feelings towards the daughter are also depicted as harsh. Even when she is lucid enough to recognize Claudette, she speaks of her as if she despised her. “You’re awful”, she states curtly.

We can make assumptions regarding the reasons behind the unpleasant feelings that dominate this relationship. For instance, we can suppose that there used to be a lot of emotional neglect or judgment from the side of the mother which then resulted in feelings of anger and hatred on Claudette’s side. But whatever the reasons behind all this, and whatever its current form, their toxic relationship will not last long. Claudette’s mother is constantly presented as laying in bed under the sheets like a mummy, motionless, almost seeming dead. In one scene, we hear her throw the food that Claudette tries to feed her, but we never actually see her move. In another scene, a fly walks over her face and almost enters her mouth, but still she doesn’t move. Claudette also appears to lay in bed a lot or daydream on the sofa, as if an invisible power were dragging her towards immobility. Hence this “powerless” state may also allow her to sit with her long-time feelings of resentment, which are now merged with the guilt of not performing the social duty of the caretaker as well as people expect from her. Claudette faces this dead-end dynamic and these feelings on her own, and she herself must find a way to withstand them.

While she tends to frequent her bed, as does her mother, Claudette also can’t help being alive: she cries, she gets angry, she searches for food, she has sex. Claudette’s relationship to sex is a core theme in World. The film starts with her having rough sex with some guy in a car. Later, during a phone call with her boyfriend, she asks him to describe her what “he’s going to do to her” when he returns. In another scene, she has sex with a stranger in exchange for fish. In the 22-minute short, Claudette engages in sexual activities that come off as assertive, but also as rough and risky. As the other key theme in the film is death, the protagonist’s “fixation” on sex broaches the archetypal binary of Eros versus Thanatos. When death is approaching, Eros thrives and represents the will of humans to continue feeling alive.

In Claudette’s case, sex can be interpreted as her attempt to fight death and whatever else comes with it. But as is also true of her mother, Claudette’s relation to sex seems to be one-sided, as she doesn’t seem to “connect” with her sex partners. It appears that sex functions for her only as an escapist portal, as a way of deriving short-term pleasure or of managing to exist in this “shithole”. Hence, pleasure doesn’t seem to culminate in satisfaction. When she masturbates, a tear rolls down her cheek as soon as she climaxes. This scene is a turning point in the film because here Claudette’s sadness is substantiated. It becomes clear that, despite her attempts to suppress her feelings, the unspoken sadness remains, and the emotional dead-end of her relationship with her mother weighs on her. From this moment on, she softens, and in the final scene she even lays in her bed and hugs her mother, an ending that shines a ray of light onto the heroine’s journey. Claudette seems to have recognized that her presence in this “shithole” is not really forced upon her. Rather, it is an expression of her authentic will. Claudette is in fact the caretaker of her mother and that is an act of love. The short film ends with a gold field of wheat under the daylight, still quiet in its banal way of just being. A circle of smoke appears in the middle that gradually thickens, and the title of the film, “World“, appears inside of it. Soon more circles are shown forming a spiral of smoking rings. Finally, the heroine’s journey seems complete.