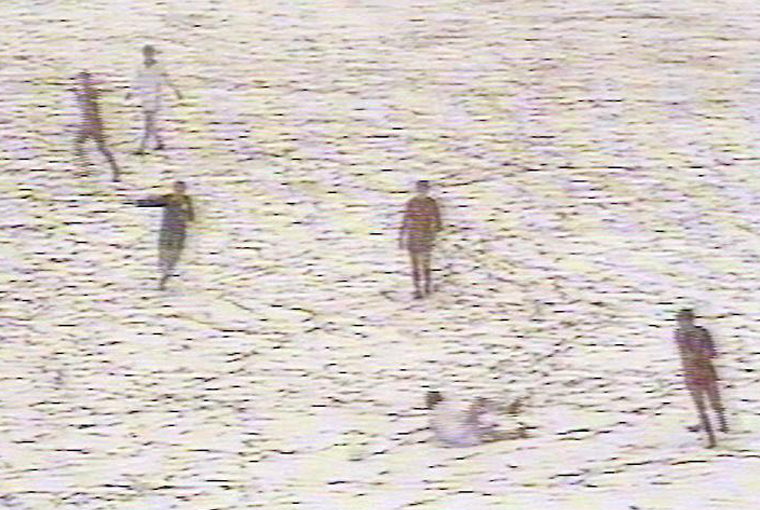 Don’t you think this looks a lot like one of my films?” Corneliu Porumboiu asks his father about halfway through this projection… “It’s really slow and nothing much is happening”. This remark, which makes everyone in the audience chuckle, is rather telling about the challenge the director has set for himself in making this original and surprising documentary.

The proposition is simple. The image is a replay in real-time from the original television screening of a football game from the late 1980’s in Romania. The voice-over is actually a recent recorded conversation between Porumboiu and his father – the latter happened to have also been the referee for this particular game.

The film itself presents as a challenge from Porumboiu’s father: “You couldn’t make a film out of this”, says the disembodied, slightly disapproving voice, “No one would watch it” (cue more laughter from the audience). This gentle teasing continues throughout the film, but it only eggs Corneliu on. “We’ll see about that”, retorts the son.

Underneath the simple bantering, we discover divergent ideas about the purpose of documentary between father and son. While the father seems to be searching for a concrete reason or plot for such a film: “if this was made in 1989 you could say that it predicted the end of communism”, the son takes inspiration from the technicalities, pointing out details about the number of cameras filming the game and asking about the personal lives of the players. Where the father searches for grand historical significance, the son takes pleasure in simple historical detail. This ‘game’, a cheerful banter between father and son, continues throughout the feature.

The year is 1988, it’s a Steaua-Dinamo game in Bucharest. It is snowing heavily but the crowd is dense. Porumboiu the Elder explains some basic truths about the game. How he had been out to check that the field was playable twice before the game started. How one team was the favorite of Ceaușescu and the other of an important member of the army. How both teams had tried to bribe him.

The great thing about this film is that it has no pretension. Sometimes there are relatively long sequences of silence as we find ourselves growing interest in this game which took place so long ago, until an offhand comment from one of the two spectators thrusts us back into the present moment and reminds us of the futility of getting caught up in something that has already been won.

The self-effacing and simple film may be surprising for the spectator of today. Modern documentary seems to contain more and more staging and the voice-over is often a big part of this, as it is meticulously studied and turned over to produce a study which ‘sells’ the subject. Here, we have a voice-over that is interrupted three times by the father’s cell phone ringing. Once he answers the phone and has a relatively long conversation with a friend about which cakes to buy.

It may not always be easy to listen to such a commentary, and there are moments when the long silences or the questions posed by the son are frustratingly left unanswered.The image is unsteady and although we can still make out the faces of the players, the numbers on their shirts are often difficult to discern. But this documentary film goes beyond the game itself, the team history or even politics (like the political meaning of cameras which swerve to avoid bad sportsmanship). It is a study of time and art: a director trying to prove to his father that art and time are inextricably interlinked. Herein lies the genius of The Second Game.