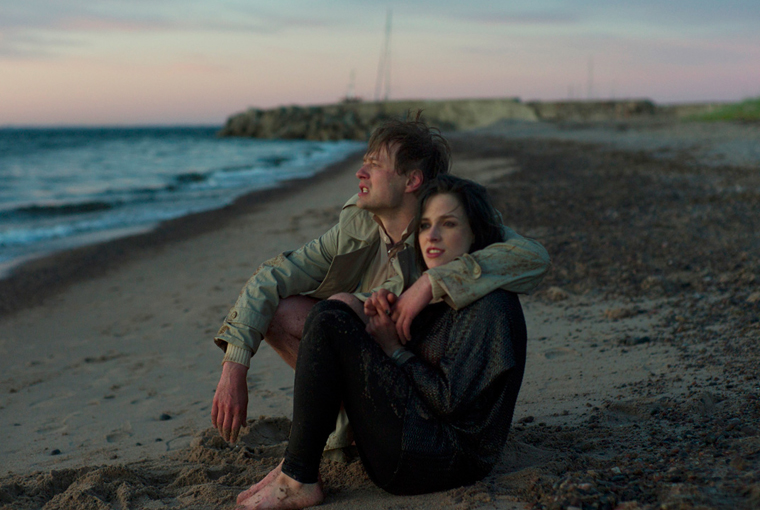 Free Range revolves around a young, stylish writer whose life takes a turn when he loses his job and, soon thereafter, his girlfriend Susanna tells him she’s pregnant. Fred is not much into problems unless they’re intellectual and he can reflect on them and turn them into poetry; his first reaction to his ample real-life conundrums is getting drunk (a regular) and sleeping with his ex-girlfriend. Soon, he returns to Susanna, who greets him back after a disturbing sex scene. Though his ex-boss offers Fred to print his novel, Fred is disgusted by the profit-oriented ways of the publishing business and seeks remuneration elsewhere. Stumbling upon “manual” jobs, he is repelled by their vapid monotony. Frustrated, his emotional energy gathers and inevitably explodes aesthetically, if not narratively, as Fred hijacks a trolleybus and, more cogently, has to decide between Susanna and their child and his narcissistic self-celebration.

Somewhat simplistically, it is Fred the writer – alcoholic, book aficionado and idealist -, vs. the world, aka ugly capitalists with an endangered sex life. That the bourgeois win in the end is nothing by way of revelation, but an old, existentialist truism about the ultimate inescapability of the world as we know (and hate) it on the one hand, and a way of saving Fred for the viewer on the other. Whether any viewers can in fact identify with Fred is an empiric question; judging by Berlinale reviews, the answer is no. Indeed, there is not much to like about Fred. Insincere, irresponsible and egoistic (he seems to take his problem with “stupid, repetitive work” as purely personal), he’s not the successful writer-friend one dreams of having, but more like the genius who’s so loony one is happy not to be him.

Free Range, co-written by Ounpuu and Robert Kurvitz, coasts along a thin narrative, with much of its 104 minutes of running time dedicated to Fred’s erratic escapades. Still, Ounpuu’s ode to rebellion is likeably stylized – with superb casting, an eye-catching soundtrack and a few moments of solid comedy, the film has what it takes to make a one-time viewing just about enjoyable (importantly, Mart Taniel’s cinematography and Liis Nimik’s editing fit the film’s mood perfectly). The secret to taking pleasure in this film is not to reflect on but instead “live” it (which, by the way, is the way that Fred copes with his life). On the other hand, there is not much to think about in Ounpuu’s third feature save for the endless quotes and references, which make the film oddly international (“Ballad on Approving of the World“, its subtitle, is a reference to a Brecht poem).

Bashing Terrence Malick’s Tree of Life is typical of Fred, who calls the film “faggoty” and would certainly find its solemn bearing boring and pathetic (besides, how stylish to be kicked out of work for publishing profanities about a hyped movie!). Of course, in both his life and writing Fred himself is utterly sincere, pontificating about the torment of existence and half-drowning his girlfriend after she cautiously criticizes one of his manuscripts. The bigger problem is that Ounpuu doesn’t point towards such contradictions, instead sympathizing with Fred’s Weltschmerz. In the end, he is forgiven by both director and Susanna, who embrace this hipster existentialist for his talent and allure (?). Anything goes if you’re an artist. At least that’s what we’re told.