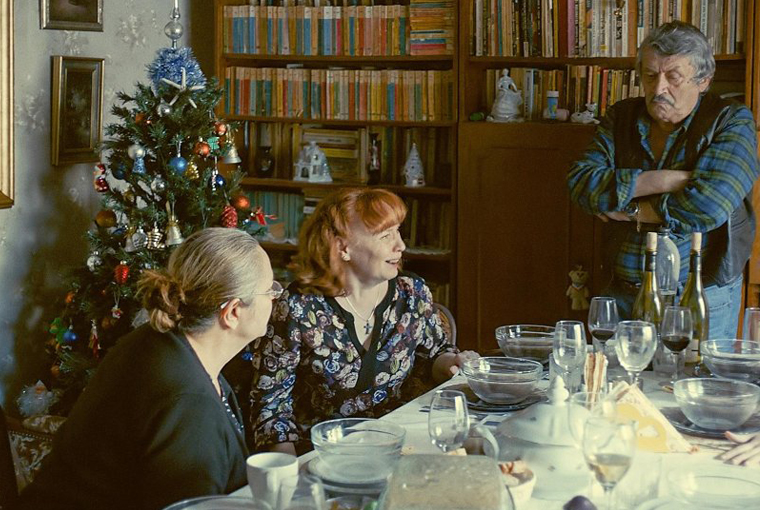 With embittered disputes over Disney princesses, 9/11 and the Communist legacy preluding a festive meal that may never get eaten, Cristi Puiu’s Sieranevada is possibly the ultimate family gathering movie. One appropriately gloomy winter afternoon in Bucharest, a traditional memorial is due to take place to mark 40 days since the death of Emil, the erstwhile patriarch of the household, but personal dramas and revelations keep prolonging the event and distracting from the rituals.

It takes most of the film’s three hours to figure out how everyone in the sprawling ensemble cast is actually related, but the archetypes they represent are so familiar and recognizable that the story doesn’t suffer from this lack of coherent exposition. If anything, the process of trying to piece the family tree together is quite entertaining in itself. The central character, in so far as there is one, is Lary (Mimi Brănescu), a doctor who arrives at the get-together with his gloriously abrasive wife Laura (Cătălina Moga), who is desperate to avoid her in-laws and duly slips away on the pretext of going to the supermarket. Lary’s young cousin Cami (Ilona Brezoianu) brings home a paralytic Croatian friend who passes out in inappropriate places, only to wake up and vomit periodically. An elderly family friend (Tatiana Iekel) delights in haranguing Lary’s sister Sandra (Judith State) with her treatises on how good life was in the olden days. Accusations of infidelities are hurled in all directions as cabbages are stuffed and cigarettes are frantically chain smoked. The priest due to perform the ritual is nowhere to be seen, and nobody can eat without him. The burden of familial diplomacy falls on Lary’s shoulders, but as the day wears on he too begins to show signs of cracking.

The action takes place more or less in real time, and is almost exclusively confined to the family’s small apartment. Despite the cramped conditions, the camera is miraculously fluid and follows the characters storming from room to room with balletic ease. The whole film is exceptionally naturalistic, from the set to the sound to the acting. The dialogue perfectly captures the banal-absurd dynamics of family relations, and is flawlessly delivered with the right amount of humor and humanity. While a lot of the references will be lost on non-locals, the scenario is so convincing and evocative that it will no doubt resonate with audiences way beyond Romania’s borders.

Cramped in spats, tears and slamming doors, Puiu manages to raise a number of philosophical and moral issues, and in a much less shoe-horned manner than his obvious point of comparison, Woody Allen. Amongst the rantings of conspiracy theorist Sebi (Marin Grigore) and the debates on acceptable sexual behavior from the hysterical Aunt Ofelia (Ana Ciontea), questions are raised about social and family allegiances, and the validity of lying and of accepting obvious lies at face value. We witness the process of mythologizing on a national and personal level, and are left contemplating its implications. Given the subtlety of the work as a whole, perhaps the least convincing scene is a revelatory moment between Lary and Laura, which seems to come out of nowhere and ties up thematic strands gratingly neatly.

The determining factor in audience opinions will undoubtedly be the use of time, largely dividing viewers into those who find it unjustifiably long and those who find it unbearably long. However, there is also sure to be a minority group who would gladly sit through another hour. While others have deemed the film’s protracted fixation with banal detail to be provocative or indulgent, I found it entirely engrossing and completely appropriate for the topic. Whatever your opinion on the merits of slow cinema, I defy anyone to leave the cinema without feeling like they have truly lived through the experience along with the characters. You may not necessarily have a firm grip on which one is which and who does what for a living, but the characters manage to stay just on the right side of pastiche and feel like a genuine family with a convincing history. By the end of the film you feel so intimately acquainted with the apartment that if someone was to ask you to fetch the soup spoons you’d know exactly which drawer to head to without thinking twice. One word of caution, though: this is not a film to be watched on an empty stomach (and smokers may start to twitch after the hundredth cigarette is lit on screen but the run time still has an hour and a half to go). Perhaps the true message of Sieranevada, whether intended or not, is that sometimes our problems can be solved just by sitting and eating. 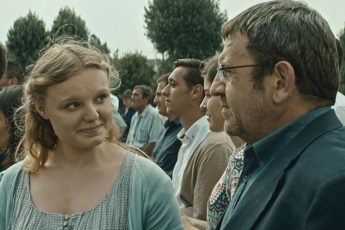 « Previous post
László Nemes’ Son of Saul (Saul fia, 2015)
Next post »
Iglika Triffonova’s The Prosecutor, the Defender, the Father and His Son (2015)