Aurelia Mihai on her Work 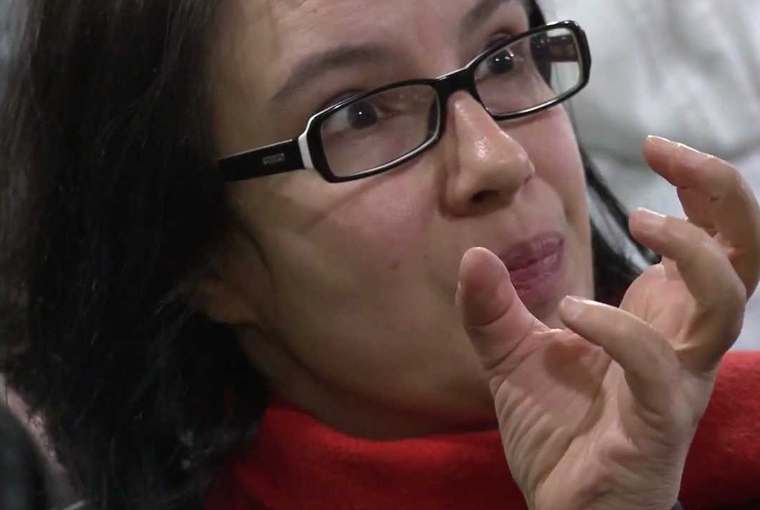 We met Aurelia Mihai in Berlin, where she attended the Rencontres Internationales Paris/Berlin/Madrid, and we spoke about some themes of her work.

The trilogy wasn’t planned as a trilogy at all. It only came about because at the end of 2004 I started to develop City of Bucur as a film about the foundation myth of Bucharest, my native city, but set in the present.

I started with the idea of reconstructing the founding myth of Bucharest in a modern setting, but exactly at the place where the legend was supposed to have taken place. According to the legend, Bucur was a shepherd who could play the flute like no other. He was the one who founded this place – Bucharest – but for him at that time it was only green hills, rivers, and rich soil. So he decided to settle there. Today, of course, the historical center of Bucharest is gone, destroyed, and what now stands on the Uranus Hill is Ceausescu’s palace. But in any case, human remains have been discovered there that even pre-date the legend is date).

City of Bucur is a film about Bucharest. It is a film about a non-existent film. The story of the film in the film, which has not yet been shot, has actually already been recounted indirectly. We know there is this projected film which will tell the tale of the city’s development in a single shot — from its foundation myth to the present.

It was a very long process from the idea to completion of the finished film, about four to five years. During all this time the theme of the film haunted me. This was how the trilogy came about.

Chronologically, Transhumanţa is the first part of the trilogy, a two-channel video installation.
Transhumanţa is set in Goch, which is a small town in North Rhine-Westphalia, Germany, on the Dutch border. I was invited to do a project for the muncipal art museum, so I walked around and looked at some books on Goch, and in one of them I found two pictures: a shepherd on a hill and an airport.

Now in 2007, while I was working on this project, Romania joined the EU, which meant that suddenly all the European laws came into effect. One of these laws states that when a shepherd passes a town with his sheep while travelling, he must obtain authorisation from the mayor of the town. However, it is bureaucratically impossible to comply with this, because you can’t wait around for weeks while every mayor finally gives you permission to pass through his or her town. So the video installation is influenced by a performative attitude towards this law.

The two projections both follow a herd of sheep on its way from the countryside to the town. For a time the herd is accompanied by a shepherd on foot; then, from a helicopter’s perspective one sees the herd on a trailer being pulled by a tractor.

My idea was to transport the sheep to the art museum in Goch but using the transportation method common in Romania: shepherd and sheep are all in the back of a pick-up truck. Under EU law this is not allowed. The sheep have to be separated according to their sex, the truck has to be air-conditioned, there has to be water for them, and they have to stop for a rest every four hours.

…And The Moldavian One, like City of Bucur, is based on a legend. In this legend there are three shepherds and two of them, one from Wallachia and the other from Transylvania, meet to kill the third one, who is from Moldavia. However, a sheep overhears them plotting and the legend is told from the perspective of the sheep. According to the legend, when the Moldavian shepherd is dying, he asks the sheep not to tell his mother that he is dead but that he has married a star. What interested me about this legend is not the fact that a particular shepherd dies — in my film the shepherd doesn’t die — but that the profession of the shepherd is disappearing; this traditional form of shepherding has no chance of survival in the European Union.

The subject of my movie …And The Moldavian One appears to be the Moldavian shepherd, however my intention was to describe, using archaic images and multiple angles, the economic, social, and historical context of the present. …And The Moldavian One is conceived as a fictional dialogue taking place at the territorial frontier separating Romania (the region called Moldavia) from the Moldavian Republic, two countries divided by the river Prut and by history.

It is not only the language that remains unchanged; many of the villages situated on the opposite banks of the Prut bear the same name ; cheese, too, is made according to the same recipe.

In this movie, the historical context is shaped starting from the accounts of the people living on the banks of the river Prut, from stories experienced by themselves and by their ancestors.

In all of these films sheep play a central role. In City of Bucur sheep are part of the creation myth of Bucharest, and in The Moldavian One, Transhumanţa they symbolize the disappearance of a tradition.

In Romania’s cultural history, sheep are very important and I like deconstructing national symbols that people identify with. In City of Bucur the sheep don’t make it to Bucharest, which may have been the reason why I wasn’t allowed to shoot the film in the palace, as the negative connotation might somehow tarnish the image of the city. For the mythological character to arrive in a city where he is a total stranger also goes against the usual version of the story.

… And The Moldavian One depicts shepherds at their work. And the narration recapitulates what they are doing, why they love their work, what made them take up that work, and so on. But in the end the film turns out to be a film about the Romanian–Moldavian border. It depicts the changes that these people experienced during three different political eras: communism, post-communism, and Romania’s entry into the EU.

In City of Bucur you are actually filming a film team making the film about the foundation-legend. “Valley of Dreamers” (2004) is also a fake documentary. What is your interest in playing with perception?

In City of Bucur, what I am interested in is the mixture of documentary and fictional filmmaking, the passage from mythology to reality in a single shot. Originally, I planned to make this film in a single shot that would start with the legendary figure and end in documentary-like reality. One shot that transports a “fiction” into contemporary reality.

I am also trying to question our perception of the world through art. In the Moldavian film, too, one is inclined to think that this is a documentary about how to make cheese and how to skin sheep. But then, all of a sudden, you notice that the film is actually about the people’s situation at the border. Valley of Dreamers was the first film where I deliberately combined fiction and reality.

Yes, I think there is both a historical reality and a subjective reality. I have always worked with different perspectives that are still all part of reality, in a way. Maybe I do this because of my own biography, because I live in between two worlds — Germany and Romania. In the end, I am always subjective. Take City of Bucur, for example. The real title is Aurelia Mihai’s City of Bucur, which is a reference to Fellini’s Roma, which is not just called Roma, or Roma by Federico Fellini, but has the director’s name preceding it. It’s an autobiographical film.

Don’t you think that filming other people filming a reality establishes a distance towards that reality?

I have problems showing other people how their reality is, as I don’t experience that reality everyday myself. I am an outsider in Romania, just as I am an outsider here. So in a way, I have to establish a distance to stay true to myself.

In almost all of your films something from the past (a myth, a setting, a custom) is confronted with the present. Do you consider yourself as a kind of archeologist?

History is very important for our culture and it allows us to see ourselves from a different perspective. For me past and present are worlds that belong together; it doesn’t matter whether you perceive these worlds or not.

Would you agree that one of your trademarks is irony?

Well, irony in the sense of quiet criticism, subtle social criticism, yes. And sometimes I’m surprised. When I was in the United States shooting in Las Vegas, I sat with some intellectuals who couldn’t understand why I would possibly want to go there of all places. They thought Las Vegas a disgrace. But using subtle irony you can say a lot without being direct.

Your early films, for example Private room (2006) and Endless Motion (1998) are neither historical nor explicitly ironic…

Endless Motion is a reflection on modern architecture, on the Bauhaus, but also on the Communist housing blocks that I grew up in. Another inspiration was Constantin Brancusi who created this sculpture called the “endless column” which is based on the endless repetition of one module. My film functions in a very similar way, there is one module that gets repeated. Private Rooms is a portrait of society. The video installation consists of two parts; one staged and the other documentary-like. In the first part a friend of mine walks through different rooms in different cities but acts as though she is at home. In the documentary part, the people are in their own homes.

Do you think that film works in a museum?

I hope so! But it depends on what you understand as film. If you only understand the classic 90 minute-feature as film, it obviously gets difficult, unless you do what they did with Werner Schroeter at the Centre Pompidou by screening a film retrospective of his work at the Centre Pompidou cinema. Film is definitely part of the pictorial art world and should therefore have a place in a museum. Video art has a 40-year old history in Germany.