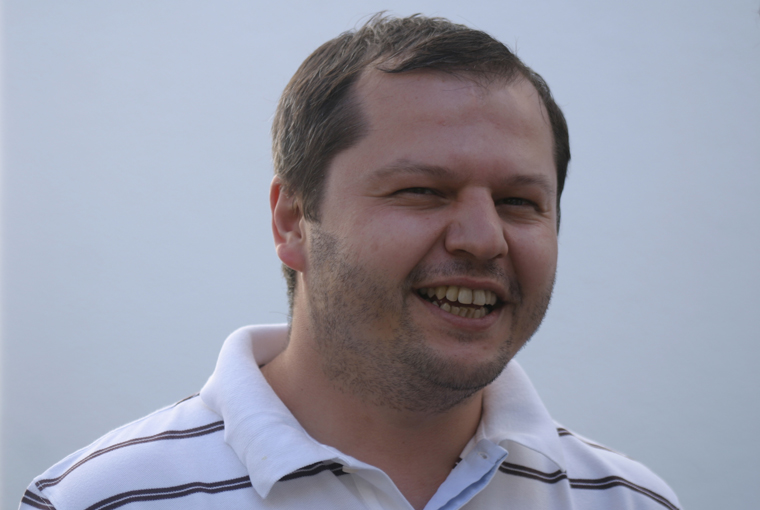 I met Porumboiu on an afternoon during the Cannes Film Festival, where he was part of the jury for the Cinéfondation section. Luckily, he had the time to drop a few words on his own films…

“12.08 East of Bucharest” and “Police, Adjective”, as other Romanian films, are very concerned with language.

At the end of my first movie, language was what I was concerned with. In 12:08, the question is what is revolution? Most people have a very romantic perception of revolution, they have the impression that everything can change in a couple of days, even overnight. My characters are in an intermediary state, but each one has his own point of view. Having a point of view is revolutionary. This was what I was looking for. I tried to clarify this concept of revolution, of how we conceive reality.

Cristi, in “Police, Adjective”, also has his own point of view. He questions human dictionaries, but seems to be one himself in his private life.

Yes, he has the problem to define what is happening around him. But during all the scenes that show him alone, when he is watching the teenagers he has to follow, you see that he likes what he is doing. There, he is stuck between what he thinks is right, and what he thinks he should think is right. He is like a hunter. At every moment, he is between two rhythms of thought, the natural and the unnatural. The latter is the limit of the character: he can only think in certain ways.

Can you remember how people dealt with language during Ceausescu’s time?

In TV-Shows you could see people arguing about the meaning of certain words, and afterwords they would force each other to consult a dictionary. It was absurd. But you could find these situations quite often. Today we don’t have common values to agree on, which might be another problem. Before there was the fear of opposing the right term, today you have all sorts of possibilities but people refuse to define. It’s a sort of chaos. In many Romanian films you can feel this kind of chaos.

I was fourteen at the time of the revolution. The others like Cristi or Mungiu were twenty or something like that. So this generation expected that everything will change, and that everything will change very fast. So there is huge gap between my parents and our generation. The new generation, who didn’t experience the revolution has yet another gap. Our generation is in between. We had to see that things didn’t change in the way we wanted them to change. I have the feeling that we are like a lost generation.

The young people who are now in their twenties don’t even ask how things were. They don’t know a lot about the revolution. I really believe that they are very different. I have a lot of friends who live abroad, who left Romania.

Has the tension between the generations to do with guilt or accusation?

I don’t think so. At least for me it has nothing to do with that. I try to see things as an artist. So there is no blame in what I do. I just try to clarify my world, to understand the way we are living. I try to let people see where we are. For me, cinema is not the right place to blame other people. My characters are not guilty because you can understand them in a way, you cannot generalize them. They are not black-and-white.

What surprised me when I first saw your films, but also other Romanian films, was the humor with which you deal with your country’s darker past.

Yes, I think this must be some cultural attitude. Maybe it’s linked to orthodoxy, or some Slavic influence. Or I’m just like that! But I am a very serious man. When you make comedy, you have to be very serious. All my characters are very serious. I would never think that I am about to make a comedy, but then you feel it, that some things are very ironic or comic. We don’t laugh during shootings. You have to be very precise. Maybe when I’m writing, I laugh. I remember when someone showed me pictures of us shooting 12:08, I looked at them and nobody was laughing. It’s serious filmmaking!

Did you choose Vladimir Ivanov, the actor in “Police, Adjective”, because you saw him in “4 Months, 3 Weeks, 2 Days”?

I thought about Vlad for that role. In fact, I made a casting and I saw other actors, but I sent Vlad the text, he came and we worked on it. It was quite a hard part. After that, I thought of Dragos Bucur when I was writing the script, I knew him for a long time. He should have been the main character. We have already worked together for two shorts that I made, so I know him quite well and he inspires me. For the rest of the casting he was always there, it was almost like a rehearsal, since the movie is almost entirely about him. I was very concerned with shapes and forms, and of how people will look next to him.

Do you think that the Police is like an adjective in contemporary Romania?

I think that there are things changing…Romania, in the end has problems with corruption. My character, a chief like that, it would be possible. Someone like that can exist in every country. Every country that has experienced dictatorship can give birth to such a character. But I didn’t think so much of that. I don’t want to generalize, in a way I’m afraid of generalizations.

Puiu’s new film “Aurora” also ends in a police station. Are there any parallels to “Police, Adjective”?

I think the scenes are different. Both movies were made during the same time. I didn’t know his script and he didn’t know my script. When I saw his scene, it was a part of his movie. I didn’t see it as a comment or anything like that. But maybe with his character you could call it a link. It’s crazy because we didn’t speak to each other and both films talk about the impossibility to communicate. Perhaps my film is more conceptual, and Cristi’s film is more crafted. Both films are good movies. It’s a good period for us. 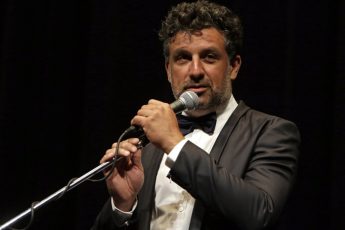 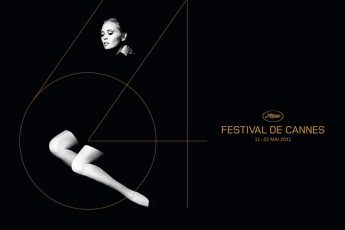