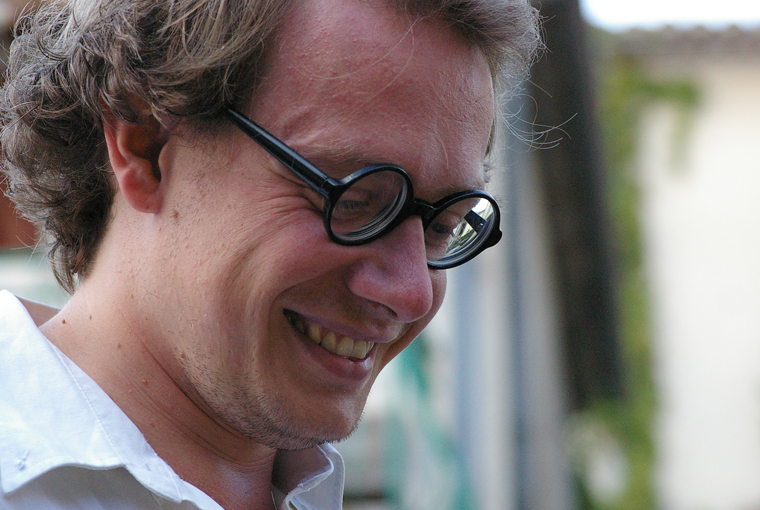 Can you tell me a little about your work? How did you get into programming?

I’ve been a curator for seven years. Before that, I used to co-direct a festival in Italy and then I started making programs for festivals in Europe. Here in Lussas, in Portugal, in Paris for the Cinema du Reel, and in Lisbon for Doc Lisboa. I was interested in film history, but I think it’s much more interesting for me to discover ancient documentaries which no one really cares about. It makes sense to make a connections between the past and the present – to make allegorical and historical connections with the past, not just as archaeological work, but as something new. I think the kind of programming I do here gives me enough freedom to do what I want to be done.

Two years ago – just after Black Friday -, I made a retrospective in Paris about communist documentaries from the United States from the 30s and 40s. In times of crisis like these, you can see the connection. I think it’s much more interesting to watch this kind of thing than Michael Moore stuff. It’s much stronger; more clever and precise. This October in Lisbon I’m making a festival about collective filmmaking in the 60s, 70s, and 80s. In this time of serious economical crisis in Portugal, people are starting to put together their energy, they want to make something collective.

I think that programming is always something to give to a younger generation, it offers the possibility of escape from this present, to find a different way, inspiration, and to find a family. Not to be held back, but to run away from simply subjective stuff. I used to be a film critic, now I consider myself a film historian. For me, making a program is about putting something together, it’s making an essay. A program is an essay in itself, both from a political and an ethical point of view.

What does the section fragment of a “filmmaker’s work” (“fragment d’une œuvre”) that you programmed this year consist of exactly, do you have any constraints?

I got to know Bogdan Dziworski because I’m a big fan of Polish film history and Polish film. I invited Audrius Stonys, the Lithuanian director, to Italy six years ago. He mentioned a film which had really shocked him at film school about a man without arms. I became curious about that, and so I decided to find about about it, even if I had no name or film title. Finally, I found out about it by watching a fiction film by a Polish film maker. I tried to find his films but I only found some of them. Then I met a Polish woman at a short film festival and she gave me his email, she knew him personally. I wrote to him – to his wife, actually – because he speaks no language other than Polish, and she sent me his films. I could have made a retrospective about the fiction filmmaker for whom Dziworski worked. Grzegorz Królikiewicz…. I edited a a book about him. But I wanted to work on the films of Dziworski

Was there a large body of work ?

He just made seventeen films, we showed thirteen. So I made a selection, and I didn’t follow the chronological order.

How did you put these films in order for the programming?

It’s quite simple, with the most beautiful at the beginning (laughs). No, we put all the sports films by Dziworski at the beginning. You have to find common themes and a common “rhytm”. Otherwise it can be too much of a shock for the audience, it may turn out to be overwhelming. I like shocking the audience actually, but not if you cross the line. Yesterday evening was the shock, with two short films and then the feature. (Obraz, 1979; Sen, 1986; and Wieczne Pretensje, 1974)

The feature film is very Polish, and for Polish people it’s quite clear, but for us it’s very hard to understand. The narrative of the film seems unrelated.

Why did you decide to show the films without subtitles or translation?

I don’t care about that. This kind of film is particularly astonishing from a visual point of view. I like to be enchanted by this stuff. I’ve seen tons of Polish films without subtitles. It may just be me, but I don’t care about characters and plot – it’s more about the visual stuff.

Could you tell us something about Dziworski’s sports films?

I like this kind of filmmaking. I was thinking about the Olympic games, and I think we are still following Leni Riefenstahl’s style with a real fascination for the body today. I don’t like that, I find it Fascist. It portrays the body as a sculpture – not as something that is alive. It’s just muscles and marble. Like Usain Bolt flexing his arms.

These kind of sport films are completely different. It’s just about human gestures, not about victory, but the very opposite. In this film about skiing, we see people falling all the time. It’s about Fall with a capital F. And about violence in sport. %he film about hockey is a film about society, and it’s also a political film: the two teams playing are from the USSR and Poland, so it’s a very violent game. The Russians against the Poles in the 70s, a time when the one was imposing a regime on the other… it’s a very clever film. Even the films which are not about sports, for example The Cross and the Axe (Krzyż i Topór, 1972), are very powerful.

The one with the song about the church?

Yes, with the song, and with the castle singing. It’s a collective voice, it’s the voice of the castle singing collective victory. The Polish are a very nostalgic people I think. The song is so nostalgic; it’s ridiculously pompous. The present compared with the ruined past, even in a phantom-like form makes sense, it’s a gesture towards the people. We see what we have lost.