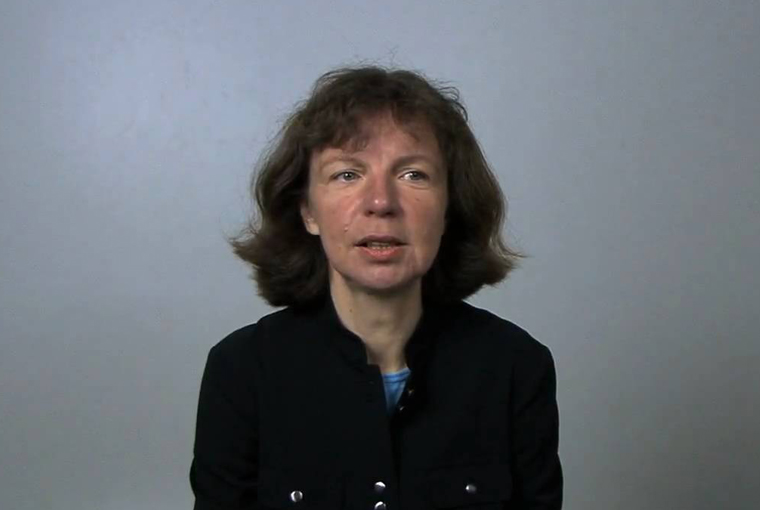 We met Laila Pakalniņa during the goEast film festival, where her new film “Dawn” screened in competition. We talked with Pakalniņa about her penchant for satire and the 1950s, and why anti-Communism is a form of ideology.

Your film “Dawn” is at once based on a shelved Eisenstein project, “Bezhin Meadows”, and on a Communist folktale surrounding Pavlik Morozov, who denounced his disobedient father to the authorities. What do these two stories have in common?

I already had the idea for the film during my studies at the Moscow Film School. I found a book by Aleksandr Rzheshevsky who was a scriptwriter for Vsevolod Pudovkin, Alexander Dovzhenko, and Sergei Eisenstein. All those directors made great films, but failed at realizing his scripts for different reasons; sometimes for artistic reasons and sometimes for political reasons. When I read the script, I liked it a lot but I knew that I could never make a film out of it for two reasons. First because I was studying documentary film. So I never thought that I would make fiction films. The other reason was that the film was about Russia. But I wanted to make a film about Latvians. It wouldn’t have been honest to make a satire about Russians.

So you had to change the script?

Yes. It’s a Soviet fairy tale, but I made it take place in Latvia. Rzheshevsky’s script was already based on the story of Pavlik Morozov. All children knew this story back then. But during Perestroika in the 1980s, it was revealed that the story never happened. It was all propaganda.

Your film is funny. Was Rzheshevsky’s script intentionally humorous, or was it “honest” propaganda?

It was funny. When I was reading the script, I was laughing. I couldn’t understand how it was possible to write something like it. Of course you can laugh about many Soviet films, even though they were meant to be honest. But I guess this film was so special because it was intended as a parody.

But your film is not only satirical. It is also a homage to Russian cinema, and the cinema of Sergei Eisenstein. Is it more satire or more homage?

It’s both. When I made the film, it was not intended to be a parody. That would have been too easy. It’s easy to laugh about the past.

One of your previous films, “The Shoe”, also takes place in the 1950s. Is that a period you’re particularly interested in?

I don’t know. It just somehow happened. When you create something, you need imagination. But if you make a film about the middle ages, you rely more on your imagination than if you make a film about the imminent past. I have memories although my childhood was not in the 1950s. When we made The Shoe, we tried to understand how it was when our parents were young. So I need to borrow from experience but I also need to imagine some things.

In “The Shoe”, the soldiers all speak Russian. In “Dawn”, everyone speaks Latvian. Are there too many stereotypes of evil Russians in cinema? Too many portraits of Latvian victims?

I wanted to shoot Dawn entirely in Russian to show that representatives of power were not only Russian. It was mutual. Even saying that Latvia was occupied is very difficult to uphold. It would have never happened without the help of Latvians. Latvians were also Communist. That’s why I wanted to shoot the entire film in Latvian.

There are also no positive characters in your film.

Eisenstein’s film, although we will never be able to see it, had heroes and villains. There are no heroes in my movie. The father, an anti-Communist, could easily be turned into a positive character from today’s perspective. But I didn’t want to do that. He’s an alcoholic. Of course he would be, if he couldn’t adapt to the system. You drink, you don’t struggle. He was also so brainwashed by religion – as if God had allowed him to kill his son. If there’s an authority like God, Stalin or Capitalism, then anything wrong or dangerous might happen.

Don’t you think that your satirical point of view may be misinterpreted as anti-Russian or anti-Communist?

No. I thought about this. But remember that the film ends with an anthem of Soviet Latvia and chicken eating shit. I think that my position is clear. But regarding the reactions, it’s interesting that the film is better understood in Iran than in Latvia, even though Iranians are probably less familiar with Latvian history. For them the film is about freedom. But older audiences in Latvia, those that lived through Soviet times, believe that I’m lying and that “Europe” will reprimand us for showing Latvia in such a bad light. Some even suggested that I should’ve made a film about Estonia instead.

How do you explain this kind of nationalism?

I think it’s a need to represent an ideal to outsiders. But if cinema were to be reduced to cultural diplomacy, it would die. We would go to the movies to watch commercials about other countries with nice rivers, sunsets, etc.