Human Remains of the Yugoslav Past 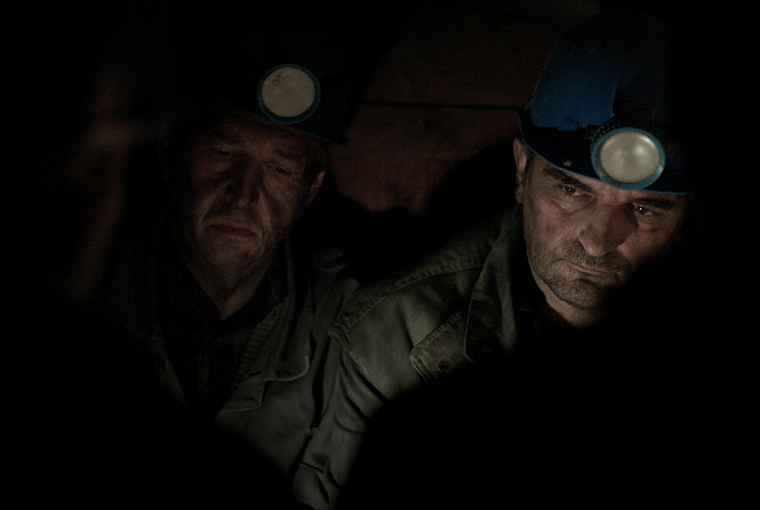 The Slovenian-Croatian-German co-production The Miner, like its protagonist, Alija, delves into the painful histories of former Yugoslavia through the unearthing of human remains in an abandoned coal mine in Slovenia. Screened during the 58th Thessaloniki International Film Festival Balkan Survey program, The Miner previously participated in the festival’s co-production forum Crossroads. Not surprisingly, it received a Special Mention at the 2017 Warsaw Film Festival and took away the prize for Best Director at the Vesna Awards. The director, Hanna Slak – skilfully dusting away sediments of the traumatic past – depicts an intimate and humanistic portrait of a Bosnian immigrant worker and his family. The Miner is a fictionalised adaptation of actual events and based on a memoir entitled Nobody written by Mehmedalija Alić. Alić, a real-life miner from Bosnia who had lost his brothers during the Srebrenica massacre, was involved in the discovery of mass graves from the Second World War, in Huda Jama (the Huda mine), near the town of Laško in 20091. As Slak herself says in an interview: “What moved me, is that this miner had a deep faith in humanity. He was a sort of humanist who would not compromise on responsibility. I felt the need to make a film about his life because we need this kind of hero fighting for humanist values in our cynical post-modern society, in which our role models are capitalism and Hollywood stars.”2

Through the miner’s story, Slak combines several key issues broached by the cinemas of former Yugoslav countries over the last two decades: a deep concern for the past, the recent and more distant war(s), national tragedies and myths, as well as the existential crisis of the transitional period from Socialism to capitalism. In addition, the film foregrounds the question of statelessness of citizens following the break-up of Yugoslavia and the so-called “effacement” of so many individuals deprived of their nationality.

The year is 2009, the start of the global economic crisis, and Alija Bašić (Leon Lučev), is charged by his boss to write a report on an abandoned mine that is under the looming threat of the mining company’s closure. Behind the sealed concrete wall, he discovers human remains which are assumed to be the bodies of civilians killed in the immediate aftermath of the Second World War. Alija insists that the victims be identified and buried properly. He goes to great lengths to expose this uncomfortable secret despite thereby risking to lose his job. Meanwhile, he is haunted by recurring nightmares of finding his sister’s remains in the mine, and through him we are haunted by the dramatic consequences of the 1990s Yugoslav wars. The director constructs an effective social drama through a solid script, a controlled tempo and a very strong lead performance. This unearthing of a contentious and downplayed chapter in Slovenian and former Yugoslav history, that of the killing of civilians at the end of World War II by partisan forces, results in a personal catharsis as Alija finally returns to Srebrenica at the end of the film.

While the film offers no consolation to the victims from Second World War nor indeed to the victims of the recent Yugoslav wars, the protagonist buries a braid of hair found in the mine in a final gesture of personal resolution. Even though the wars of the Yugoslav break-up ended more than two decades ago, The Miner reminds us that the consequences of the conflicts are very much actual. Only this year, the remaining war criminals involved in the Bosnian conflict, including Ratko Mladić, who was convicted for the Srebrenica massacre among other crimes, were sentenced in the Hague court, the United Nations-backed international criminal tribunal for the former Yugoslavia (ICTY).

1.
The Commission on Concealed Mass Graves in Slovenia, appointed in 2005, uncovered hundreds of bodies of victims of extrajudicial killings from the period immediately after Second World War in Barbarin Rov (Barbara Pit). Remains of 1420 victims have been exhumed from this site to date.
2.
‘We need a hero who fights for humanist values’, interview with Hanna Slak, by Fabien Lemercier. http://cineuropa.org/it.aspx?t=interview&l=en&did=342674/.