Two Days in the Life of Mirjana Kir 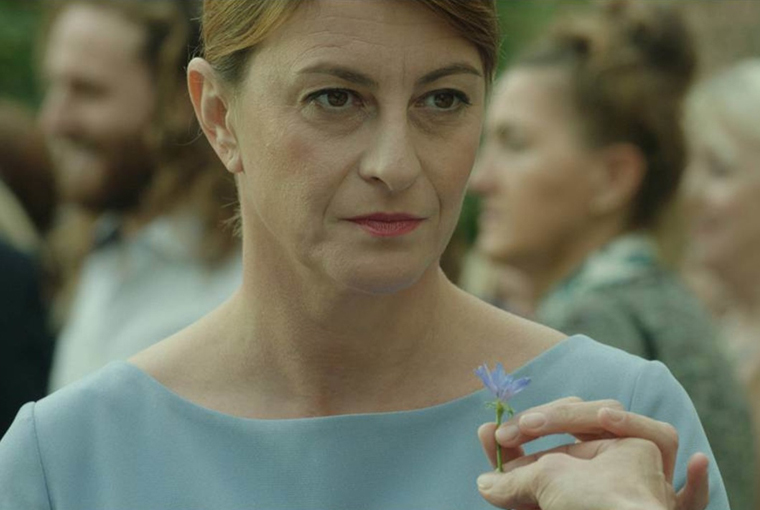 A Blue Flower, the eighth feature film of Croatian veteran director Zrinko Ogresta, had its national premiere at the Pula Film Festival following its world premiere at the Moscow International Film Festival. In Russia, the Croatian-Serbian co-production was rated third among the festival audience’s favorite films. Back home, A Blue Flower won the Grand Golden Arena for Best Film, the Golden Arenas for Best Director and Best Leading Actress (Vanja Ćirić), as well as the film critics’ award for Best Film in the Croatian program. It is undoubtedly one of those rare films that manage to be appreciated by film industry professionals, film critics, and viewers alike.

A Blue Flower is based on A Play about Mirjana and Those Around Her by Croatian playwright Ivor Martinić, who also wrote the screenplay, with Ogresta providing the final touch. The film’s origins in high-quality dramatic literature are made evident by the excellent dialogues, which are carried out by a reduced number of main characters. The result is a remarkable cinematic feat. For example, it takes the director only three minutes to deliver essential insights into the life of the protagonist, and three more minutes to introduce the other two major female characters as well – without resorting to extradiegetic music or intelligible dialogues.

The film focuses on three generations of women from the same family. The protagonist is Mirjana Kir (subtly played by theater and TV actress Vanja Ćirić, here starring in her first leading part in cinema), a forty-something single mother who has been working for the same textile mill for twenty years and is currently having an affair with her married boss. Ogresta’s previous film, On the Other Side (2016), also centered around a central female character, though there his take was more political and less psychological than in Blue Flower. Mirjana’s ex-husband Vlado abandoned his family five years ago to start a new life in Germany, and ever since the only signs of life Mirjana and their daughter have received from him were some bank transfers and Christmas cards hand-made by Vlado’s new partner. Left behind and lonely, the protagonist sacrifices most of her private life to be able to buy a beautiful apartment near the bank of the Sava river in Zagreb, and her efforts have compromised her relationships with her parents, who live out-of-town, and with her child, now a rebel teenager. Mirjana drinks around ten cups of coffee per day and smokes a lot, goes out with friends from work, and likes to hold her neighbour’s baby, but she is reluctant to reveal her feelings to anyone.

The story covers two days in the lives of Mirjana, her mother Violeta who travels to Zagreb for a medical examination (played by popular theater and film actress Anja Šovagović-Despot), and Mirjana’s daughter Veronika (newcomer Tea Harčević), who is the lead singer in a soul band and dreams of leaving for America. Violeta is a vivid archetype whom most people in the region will easily recognize. She has strong opinions on every subject (church-going, healthy eating, detergents, relationships, etc.), and she unceasingly tries to impose these opinions on Mirjana. She insists on wearing a pair of Italian shoes she has received for free, although they’re too small for her feet, because, she asserts, you cannot throw away a pair of good Italian shoes – you just have to break them in. Violeta adheres to the rules of patriarchal society and of the authoritarian church without questioning them, as she believes this is the only way to live your life.

As an urban teenager, Veronika has no respect for the traditional values of her grandmother, which she cannot relate to, and she doesn’t want anyone to tell her what to do. She is proud, as is her mother, and refuses to meet her father for having abandoned her, even though he pretends to have connections that could help her with her musical career.

During the two days, we observe Mirjana interacting with her mother and her daughter, the men in her life, her female colleagues and neighbour, and, last but not least, Ankica, her lover’s wife. Obviously, the protagonist’s most important interactions are with Violeta and Veronika, and what we realize is that, even though each of these three women have their own worlds, with a different set of values and desires, mother-daughter relationships haven’t changed as much as we might imagine. Violeta and Mirjana, on the one hand, and Mirjana and Veronika, on the other hand, are incapable of communicating with each other and, instead, they find themselves in a perpetual state of conflict, either latent or open. A remark by Violeta is suggestive of what both mothers feel when faced with their daughters: “Whenever I’m with you, I think there’s something I have to tell you. But I can never remember what it is.” A simple “I love you” is one of the things left unsaid.

Besides a culminating moment in which fantasy intrudes on the protagonist’s reality, there is another significant scene disrupting the chronological flow of the narrative. In the first act of the film, Mirjana looks at herself in the bathroom mirror, admiring the earrings she has just received from Jakov. At that point, Ogresta intercuts a flashback from the morning of the same day at the factory, when Mirjana feels voyeuristically followed and wanted by her lover/boss. Unfortunately, that moment of happiness won’t last.

A Blue Flower is a profound exploration of femininity and motherhood. It is masterfully written, sharply directed, and brilliantly acted out by the three main actresses. Ogresta proves to have an eye for relevant cultural details, such as the neighbour’s fridge full of magnets or the three Persian rugs laid on the terrace during Mirjana’s 20th work anniversary. Branko Linta’s cinematography and Maja Merlic’s production design succeed in capturing the spirit of Zagreb and the protagonist’s world. Ogresta’s tender and poignant study of love in its many forms is one of the best Croatian films to be released in recent years.