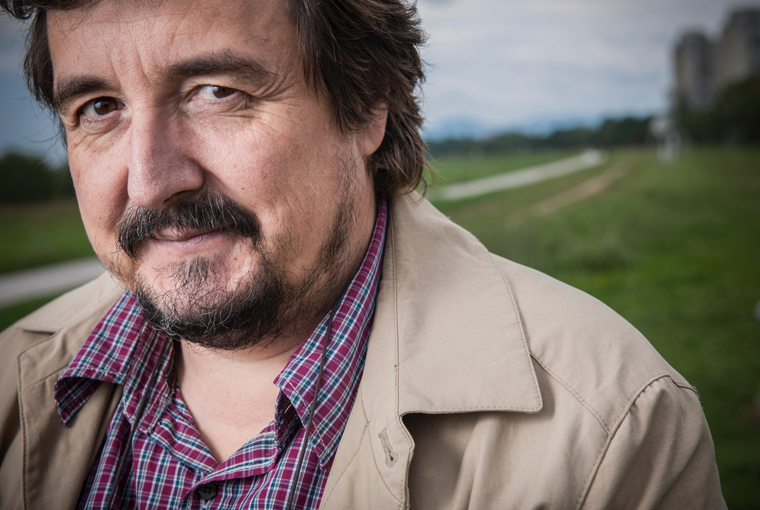 In March 2021, film director and screenwriter Pavo Marinković was appointed Artistic Director of the Pula Film Festival (PFF). We interviewed him during the 68th edition of the festival (July 17-24, 2021) about his take on the festival and his plans for the near future.

What were your intentions behind taking over the artistic direction of PFF?

Well, it might not be very nice to say this, but the festival had been a disappointment not only for me but also for a huge part of the Croatian film community. It actually didn’t serve its purpose, that of really promoting national cinema. I’ve been living abroad for several years, partly in Romania, and there I’ve researched several patterns of film festivals. I have decided to create a mixture of these patterns, a mixture that will best serve our cultural identity and strengthen our national promotion by establishing a stronger connection with European cinema. It is a different kind of festival, but I am trying to do something similar to what Tudor Giurgiu and Mihai Chirilov are doing with the Transilvania International Film Festival (TIFF) in Cluj-Napoca. I saw many good things at that festival, which is an international one while also managing to promote Romanian films and filmmakers.

PFF has a long tradition spanning back 68 years. The political and social circumstances have completely changed during this period. For example, 40 years ago, Pula was a military town, so about 2000-3,000 Yugoslav soldiers attended the screenings every night, while 30 Yugoslav films were presented. Now it’s different. We produce six to ten films each year. So, the strategy of the festival has to be different if you really want to help your country’s film industry. As a filmmaker, I had visited Pula three times before, but I didn’t really feel that I was promoting my films. I had a press screening and a press conference in the morning and the evening screening in the Pula Arena [a Roman amphitheater and PFF’s main venue], and then I went home, because there was nothing more to do for my film there. Okay, the Arena screening was attended by 5000-7000 people, but there were no Q&A sessions, no interactions with foreign filmmakers, foreign producers, festival delegates, etc. And I think that should be the point of the festival.

How do you plan to make the festival in particular and Croatian cinema in general more visible internationally?

It would help if you had good films, for sure. This year we only had six films, but I think they’re pretty decent, quite good. What more can we do? We should definitely bring in more international critics who will cover the event for international film magazines, which I think is very important. We should also invite lots of festival delegates and sales agents. We must also have more Croatian premieres to keep the local press busier as well. In previous years, the festival wasn’t growing because people from the industry thought there was no use in having a premiere in Pula, so they went to some other festivals, and one year later, when they finally came here, nobody wanted to see their films, which were considered “old” by that time. The festival used to have lots of “bad habits”, and we have to change this culture.

We have to establish something that will be interesting both for the industry and for audiences. And we have to establish a program which will also receive positive feedback from abroad. In short, we must combine several things. TIFF does that very well, and filmmakers, especially younger ones, trust the festival, so if they don’t enter Cannes Film Festival, they present their films in the Romanian Days competition in Cluj, which still provides decent visibility. This is what I want to achieve with Pula.

What was new in this year’s edition?

First of all, the international jury. Here everybody knows everyone, it’s a small country, and there was a lot of partiality in the jury before. The biggest point of the festival before were the prizes. I don’t think the awards are that important. You don’t need prizes to promote a film. They can help, but they are not essential. And what they bring as a by-product is a toxic kind of competitive atmosphere.

When the prizes started to be less trustworthy in public opinion, people were losing their trust in the festival. Therefore, we have to bring important filmmakers and decision-makers to raise the festival’s profile and increase its visibility. For example, for this year’s edition we secured Paweł Pawlikowski, Mimi Plauché from Chicago Film Festival, and other international jury members. I think this also changes the image PFF has domestically. Previously, there were 17 prizes. When you have 17 prizes, maybe you award several prizes, the most important ones, to the film that deserves them most. Or maybe not. In some cases, horrible decisions were made by the juries, which were influenced by lots of things outside of cinema. Of course, not every year…

But more and more prizes were being awarded and at the same time the prizes were becoming less and less important. I am trying to change this. This year, there were only seven prizes, and the jury could decide on some additional prizes if they decided it was really worth giving out an additional award. Of course, I faced a mutiny from one part of the Croatian filmmakers’ guild, because they started to complain how we can dare not to give away an award for Best Production Design or Best Costumes. But the festival prizes should not be the guild prizes, the prizes should only be awarded for outstanding artistic achievements. Of course, these things bring pressure, but I can live with it.

Another thing: the Pula Arena is a mythical place. But it is very difficult to program two films in the Arena because the second screening ends at 2 o’clock at night, so it’s very tricky. We tried something this year, and it didn’t work well for every screening, but for some screenings it did, so we are learning how to make it work in the future: we opened the Kaštel [a castle which houses the Historical and Maritime Museum of Istria] for night screenings with some 150 viewers. Previously, films were already screened there, but only before and after the festival. I brought in this location for the international competition, and people obviously loved it. We also introduced some gala screenings in the Istrian National Theatre, with Q&A sessions for some very interesting films, such as Bad Luck Banging or Loony Porn by Radu Jude or Ida by Paweł Pawlikowski.

Your current mandate as Artistic Director is valid for two years. What are your other plans for the next edition of the festival?

I have a good overview of the Croatian films that will be finished for the festival next year. So, I can foresee what the problems will be and how the program will look like. For the international section, I have to wait for the minority co-productions and then decide what to select from Cannes, Venice, and smaller festivals. You can’t know what the future brings. However, there were some mistakes we’ve made this year, and such mistakes should be avoided in the future. For example, there was an excellent Austrian film, Fox in a Hole, that we didn’t manage to present in the way we wanted, as the second screening in the Arena happened to be empty, which was a disaster for the film. But these things happen, and you cannot always anticipate them.

How will you balance your career as a filmmaker with the responsibilities attached to being the Artistic Director of PFF?

I prefer my career as a filmmaker. But here in Pula I imagine I am doing something of common interest. You can do both, and other filmmakers also run festivals. I don’t want to stay in this position for a long time; I just want to lay the foundations for something that will be much better than before, so that someone else can come and take it over. I’m shooting my new film in October, and I can finish post-production before the next edition, so it doesn’t interfere with the festival. There is a problem in the sense that I won’t be able to present my film in the competition here, but it’s not such a big problem. It is only about awards anyway…