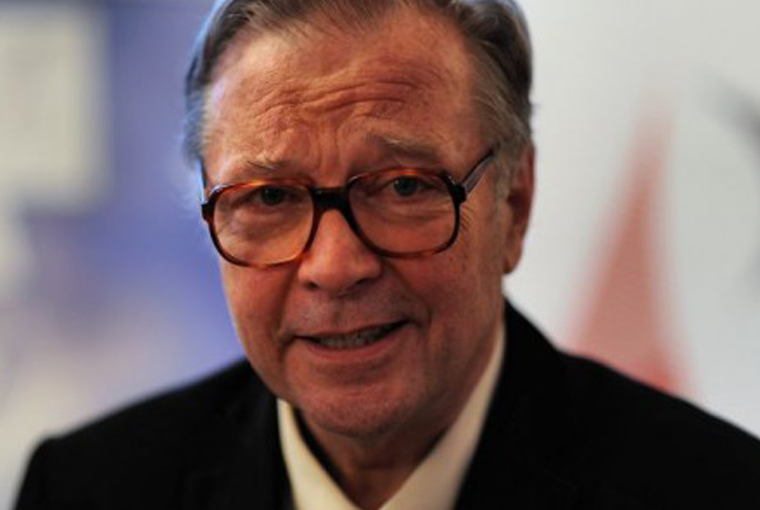 We met Krzysztof Zanussi at the Transilvania International Film Festival (May 30-June 8), where he received the event’s Lifetime Achievement award. Zanussi speaks about today’s role of cinema, truth within and outside of cinema, and politics.

You have said in an interview that there were things you could talk about during the start of your career that you cannot speak about today. What do you mean by that?

This is mostly about the language. I could use a language that was far more demanding. The public was ready to accept such a language. It is the same with Jean-Luc Godard or Alain Resnais: they were using a very sophisticated and difficult language. The mood was that people wanted to follow difficult films. Today there are less such moves. Maybe it will change tomorrow, but at the moment people are rejecting things that need real concentration and reflection. That is why the quality of cinema, and culture in general, went down. It may be partly compensated – not to be as negativistic as I am being now – by the enormous amount of people involved in culture today. But it is quantity over quality.

But there are people who still like your films from then.

Some people, but the producer won’t accept my film if it has no regular action and/or protagonist. This is my problem.

How is it possible that you were able to produce such films then? Were the film groups microcosms that worked differently than Socialism in general?

No, because we were exposed to censorship, it was controlling us. The difference is in the societies. We now have access to all kinds of products, while then we were in some ways monopolists. They were showing Western films, but it was only a selected number of productions. It was as it is in Iran today: people mostly watched domestic productions, whereas today you have an enormous competition with American cinema. That makes a difference.

The Polish Film Institute is a bit commercially oriented, isn’t it?

It should not be, but sometimes is because it is also supporting the industry. Sometimes, you need to support commercial film in order to give work to people. From an industrial point-of-view, they should particularly support co-productions and need not help purely artistic ambitions, but they have done that too – Peter Greenaway for example. And I think it was justified to take some money from tax-payers to help make a film that is shot in Poland.

You have been involved in the Polish film industry both as director and producer – do you think contemporary films from Poland are still interested in the truth?

I think truth is one of the major ideals. Truth, beauty, wisdom. These are eternal values.

Has Polish cinema found an identity after 1989?

It never lost its identity. All the international success of my colleague Krzysztof Kieslowski came after 1989. Andrzej Wajda has also been very successful. There hasn’t been a year without at least one Polish blockbuster – some of them were quite ambitious. So they were not just entertaining films, they were serious. Some of them have taken on very painful historical issues which partly modified the public opinion. Our past relationship with our neighbors, Ukraine, was revised by a huge historical film, With Fire and Sword, which admitted that we were not right in our attitude. The second revision of this magnitude was our relationship with the Jews: here we had previously also thought that we were innocent. Today, it is admitted that this was not the case. There were films that of course incited excitement and fury, but ultimately did lead to a revision of our opinion about those times. I think that any nation which believes in its future will admit its wrongdoings from the past. Only when you have no hope you insist that all you have done was right, that the whole nation is innocent. There are not even innocent individuals, this we know from the Bible and the Christian tradition.

Every director would say he is showing reality – even the Social Realists. Does it mean anything to say that one is making “real” films?

How a director comments on his work is always irrelevant. But artistic reality is really different – we always create a world, sometimes one that is meaningful, and sometimes one that is meaningless. The Socialist mirror was so deforming that it was meaningless. What is left of Socialist realism today, even if you show Battleship Potemkin? It is so insisting and so ideological that there is no real breeze of art or reflection about the rebellion. It is already preconceived, and that is why I don’t like him so much. But I know he’s the patron of all people who make commercials, because they too try to ideologize the products they sell.

Is truth as “out there” as it was when you started making films? It is difficult to argue that there is a time when it was easy to make cinema, but perhaps it was at least easier to say what was wrong with Communist Poland in the 1970s than saying what is wrong with today’s world?

It is far more difficult to say what is wrong with us today. We are in need of a new diagnosis, and filmmakers are not avantgarde enough right now. Generally speaking, I feel very upset about the banality and tabloid level of cinema. It is combative cinema which is fighting ideas which are extremely primitive. Ecology is a primitive and confused idea when you watch it carefully (look at Al Gore). Film went down with this.

What are some recent filmmakers you like? Have you looked at New Romanian cinema?

Yes, some of them I did, but I am a bit embarrassed about giving notes to my colleagues. I think it is unfair. I am certainly impressed by and interested in some Romanian productions from the last ten years. Some of my colleagues are very intelligent and I appreciate them, but I can’t give you names – I’d have to leave someone out. They are good and don’t need this sort of treatment.

Did you always feel close to fellow filmmakers?

We were in a privileged situation because we were united against a common enemy. That is what made our acts better. Human nature isn’t easy: we like to rivalize and want to be winners. Once we have a common enemy, we are more generous with each other. Recently, we fought against a new law for cinema. There was amazing solidarity of people who normally dislike each other and their work, but somehow we were all standing together. We blackmailed the parliamentarians: we used all our skills and experience from our Communist times – I am mentioning this because I know Romanian filmmakers are having trouble with the law and lawmakers. We created a good society that defends authorship rights – the filmmaker’s association is very rich. As a film association, we support and produce first-time filmmakers, but we also had enough money to buy full pages of major national papers and put the list of all parliamentarians in them prior to the vote, saying that they will all be deciding about the law on cinema, and that they will either vote for our national cinema or for Hollywood. The amount of absentees was amazing, even if they were all promised some advantages from the Americans. The parliamentarians simply got scared they would be taken as enemies of national culture, so they preferred to stay out and we won with few, but decisive votes. Now 1 1/2 percent of all the revenue made from TV ads and 1 1/2 percent of all box-office revenues goes to the Polish Film Fund!

In many Eastern European countries, especially Poland, some of the “lessons” learned during Communism have scared us away from doing certain things, for example being left.

That is something about the nature of human beings. I think the term “leftist” should be redefined anyway, because what is “left” in most post-Communist countries are mostly new bourgeois parties, which is very confusing because the left parties have money which they appropriated. I am having a very difficult dialogue with the left in my country – there are some very honest and great young people who are in collision with the great owners from the old times. It is those great owners that subsidize the left.

Do you think it is a privilege of art that it is not very precise? In philosophy, the analytical turn and its obsession with precision appears to have cost the field some popularity, or even relevance.

I have the same feeling. I was very close to analytical philosophy 30 or 40 years ago, because it was a way to counter Marxism, which was considered to be very imprecise. But I don’t think this is what we really need – that is what we have the sciences for. Philosophy should be more poetical.

Yes of course! But film can also express very profound ideas. This is what Tarkovsky managed to do with his films. And he was very poetical.

Is the world becoming more specialized? The sciences, too, seem to have stopped asking aesthetic and moral questions.

It was always a question of application of sciences, not of the sciences themselves. The sciences are only interested in unveiling the truth. Problems come with application. Biology today is a very hot issue because it touches on the identity of our species. I am thrilled now that we are on the verge of modifying the human species. Is it allowed or not? If you think you will have better people, or more beautiful, or profound people. How can you say “No, don’t do it, don’t put an implant”? But when you do it, the question is “Am I owned by myself, or does someone else own me”? Those old questions of creating and being created thus come back. Our instinct is that we can do whatever we want with our body, our soul, our species. That is a philosophical problem for your generation!

Have you learned more from teaching or from being taught?

Sometimes I learn from teaching, but not that much. Once you verbalize some of your thoughts, they somehow become artistically irrelevant. Unlike in purely intellectual work, in artistic work you must not understand what you do. Once you understand you have to stop. It means it is already explained – there must be a touch of mystery. It is a little bit awkward for me to say that because I am a rationalist. Still, creation is an intuitive art. I am true to myself when I am blind, when I have no second thoughts and just say something.

Nevertheless, interviews with filmmakers work like this: it is asking for and giving reasons for artistic decisions.

Sometimes we do find reasons. It does happen that critics really open my eyes, that they tell me something about myself that I wasn’t aware of. But at the moment of creation nothing can be worse than calculation. You must not construct your world from your ideas. I am afraid Jean-Luc Godard does it and that this is why his art is sometimes unbearable.

Is it harder to start making films than continuing to do them, then? In the beginning, your intuition is not informed by experience at all…

You have no past experience, but now that I do there are many subject matters I’ve failed to address appropriately so that I’m afraid to reapproach them. It is not that easy. Nothing becomes easier over time – that is the surprise to me. Earlier, I thought it would be like that, but it is not. 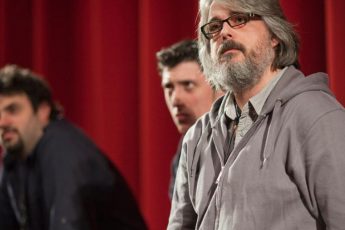 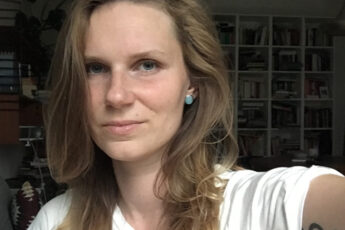