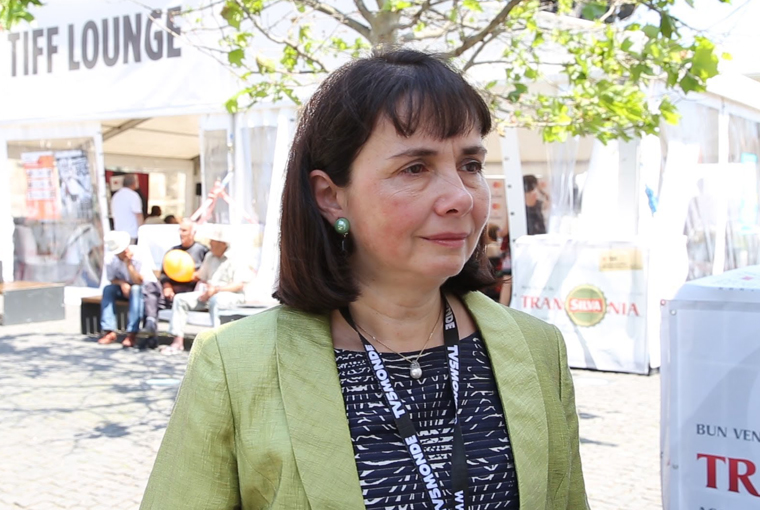 We met Dominique Nasta at the Transilvania International Film Festival (May 30-June 8) to speak to her about her new book on Romanian cinema. The book, entitled “Contemporary Romanian Cinema: The History of an Unexpected Miracle”, was launched at TIFF and is available for purchase online. Nasta is Professor of Film Studies at the Université Libre de Bruxelles.

What is the focus of your book?

The focus of my book is Romanian cinema in the context of an external perspective. I wanted to study Romanian cinema from an insider’s view – I am Romanian, I know the movies, I know the literature, I know the subtext -, but to make it accessible for a foreign audience at the same time. What I read from the insider view suffers from the same problem that films do which were made exclusively for a domestic audience. I felt the need to give a general overview of where the cinema came from, and secondly, show why some particular auteurs are especially important.

What motivates your second title for the book – why was contemporary cinema an unexpected miracle?

Everyone thinks that there was the New Wave and nothing before, so nobody expected that this wave was based on a history, a style, a common denominator in terms of acting, directing, even of mise-en-scène choices. Okay, it was a miracle that this cinema wound up in the center of the attention of foreign festivals, but it is also important to acknowledge its emergence.

What were the conditions that let the new cinema emerge?

Firstly, you have the Centre for National Cinema that gives subsidies and foreign programmes like MEDIA. Secondly, Romanians are big cinephiles, they watch films, love films and know directors by heart. I believe that there is a concern for cinema in Romania.

But there is also a problem of the lack of a general audience.

I think that Romanians as a nation are very interested in cinema, all kinds of cinema. But they couldn’t be interested in Romanian cinema as much as foreign viewers because Romanians cannot be interested in constantly being reminded of their own worries and troubles. The same happened with Bergman in Sweden. Bergman showed the obsession and perversities of Swedish cinema, which is why Swedes could not identify with it, and I think there is a similar problem with Romanian cinema. The Death of Mr. Lăzărescu is a ground-breaking film, and yet most Romanians didn’t like it. People thought that Cristi Puiu used the health-care system to make a postcard of his country, and that that is wrong. This is because people really are unattended, they have problems with paying for their medical bills and they simply do not want to be reminded of this. But this is changing – mainstream cinema is emerging in Romania, too. We are done with the one-sided approach. From here on, you’ll have genre films, commercial films and you’ll have arthouse cinema besides that.

In your book, you say that Romanian minimalist cinema is in some way essential to the film industry and the Romanian psyche.

Yes. I think minimalist cinema is representative of the Romanian psyche, Romanian originality, its theatre heritage, and also of its Eastern European elements – for instance laughing about your misfortunes. 12:08 East of Bucharest is a paradigm example, a model of this cinema.

Is a reason for Romania’s disinterest for Romanian cinema that Romania is still building its nationhood? Is it perhaps just too early to accept such a critical cinema?

I don’t think this is a wrong time for Romanian cinema. The elite, the intellectuals, the young people, they understand Romanian cinema. In all national cinemas, you have mainstream cinema and arthouse cinema. Not every American has seen the films of John Cassavetes. But I want to stress that it is important for both to exist. You need both sides of the coin. As a matter of fact, even in Czechsolovakia, you had the New Wave directors and then you had films like Lemonade Joe. Last year in Bologna they showed some Czech cinema, and it is very nice. There is mainstream with melodrama, comedy etc.

What is the economic background of the New Wave? Was there commercial pressure when it emerged?

I am not an expert in terms of economy, but as far as I know, the CNC subsidized a majority of the films produced in the early years. Many filmmakers, like Porumboiu, also benefitted from private financing. His father is an enterpreneur and also involved in football, so Porumboiu received money for most of his films from him. Cristi Puiu’s wife in turn is a co-producer, so sometimes these are family businesses. People work under improvised circumstances, and probably indeed big productions and budgets would have made these films less succesful. The Dardenne brothers started working like this and never changed their approach.

Why have no Romanian filmmakers left Romania to work abroad? For Polanski and Forman, it has worked quite well.

The situation is different: there is no dictatorship in Romania anymore, while there was one back then in both Czechoslovakia and Poland. Those people fled. We have a different political situation in Romania, and besides filmmakers want to keep their authenticity.

When did you decide to dedicate your life to Romanian cinema?

There are two stories to be told. I’ve been a film fan since I was 12 years old, and my parents were worried because they thought I didn’t care enough about school, getting married and so on. I wanted to be an actress, then a theatre director, but thought it was too tough, so I turned to teaching. It has been extremely rewarding: I realized that the people I teach later become involved in the film business in one way or another. If you are asking me about the inciting incident, as they say in screenplays, then it was Lucian Pintilie’s Reenactment. When I first saw it, on a small TV in my living room on a video tape, I think for two days I only thought of this film and said to myself that someone needs to explain why this film is one of the best films ever made.

Do you think the term “New Wave” is justified with regards to Romanian cinema? Some filmmakers have objected to it, saying it is exaggerated. In the title, you use the term “contemporary cinema”, but in your book you also use “New Wave”.

Contemporary cinema for me goes back to the 70s or 80s, whereas the New Wave has started in the 2000s. I explain in the book that no Romanian films were made in 2000 – I was once asked to write a piece on Romanian cinema for an anthology, and there I voiced the hope that this would change. It did! Of course, there is a wave. There are so many people of roughly the same generation with the same concerns, styles working at the same moment – mainly from 2005 to 2012 -, this cannot be called anything but a wave.

Do you have a favorite film from the New Wave?

Of course, I discovered a lot of great films through my work, but 12:08 East of Bucharest, 4 Months, 3 Weeks, 2 Days and The Death of Mr. Lăzărescu are the most important New Wave films to me. These films, which were made in 3 consecutive years, represent the comic vein, the tragic vein, and somehow a deeply realistic vein. The topic of abortion as addressed in 4 Months, 3 Weeks, 2 Days really reflected my personal concerns and those around me – stories I had heard from my mother’s and husband’s side. The same applies to 12:08 and Lăzărescu.

Do you think women are in some way victimized in Romanian cinema? There are few female directors who have gained international acclaim, while many female characters from Romanian films are also depicted as victims, if they are present at all.

It is complicated. I think there is a high dosis of machism in Romanian culture and Balkan culture in general. Of course, this has changed to a certain degree, but people still live with their preconceived ideas: that a woman is either a whore or a virgin. Mungiu and earlier Pintilie had wonderful portraits of women, but I would agree that this is not the case with all other directors. Still, there are young talented female directors – Ruxandra Zenide, Ada Pintilie, Iulia Rugina for instance-, and of course the actresses! I think there is both hope and huge potential.