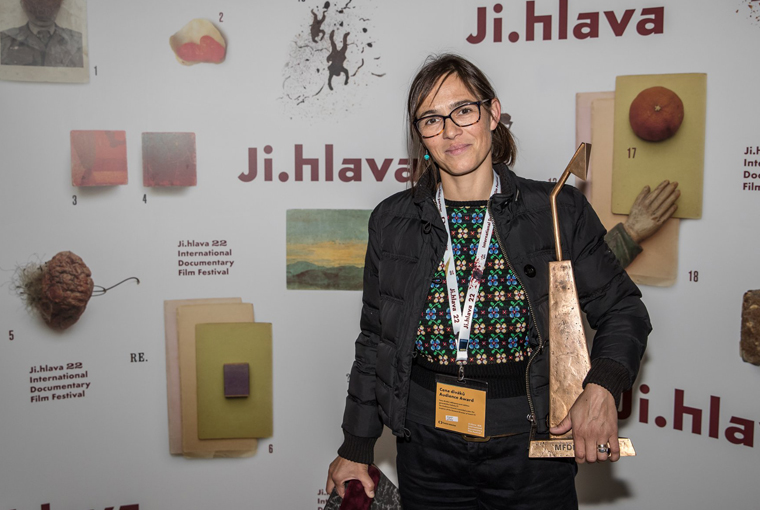 We met Romanian director Nora Agapi at this year’s Crossing Europe film festival in Linz, where she presented her fascinating feature “Timebox”. The film exposes the creative dialog between the director and her father, a documentarian and photographer who has set up a huge personal visual archive in his apartment which is now being threatened. Agapi speaks about the idea behind making her film, how it reflects her own memories, and what her plans for the future are.

When did the idea of making a film about your father first come up?

It was already in 2009, which is a long time ago, but at the time it was just an idea. I thought that I was living with this guy and didn’t even realize how good a character he can be. He has a great personality and past, so why not make a film about him? It was an idea which didn’t let me sleep; and it was in 2012 that I thought I have to start filming something. I didn’t know exactly what I was going to do, but I just went to film my father. In a way I wanted to revive the past of the house in which I grew up with my father, because it was a house where he would hold film and photography classes, back in the ‘70s, ‘80s and ‘90s, when I was very little. This was the first contact with cinema for me. Actually, he was my first teacher, as a father, but also officially, because I was sneaking into the classroom. When my father grew older, people forgot about him, a new generation of photographers came into the city [Iași] and he was gradually forgotten, at least by this new generation. Not so many people were coming to his home anymore, and I wanted to capture this memory about the house, the place and the time in my film. So that during filming, this new subject emerged out of nowhere. This is a film about the present, it’s not only about the memories of my father, but also about him being kicked out from this place by the authorities.

Is this related to the attitude with which Romanian society has dealt with its cultural heritage since the fall of Communism?

I think it’s very Romanian, because the change of the system after ’89 was very bad for society. I mean, it’s good that Communism broke apart, but people became so corrupt back then. In Bucharest you have the highest level of corruption, but at least they care about art; in the countryside people don’t care. Of course, there are institutions that do their job, there are film schools and art schools; but politicians and official institutions which could take care of cultural heritage are not interested. Especially in my city these people are very ignorant.

Let’s go back to your initial idea, to capture the memories of a certain period of time. What is the role of time in your film?

It’s actually like a game, if you want, you can play so much with time in films. It’s fascinating how you can jump in time through editing and come back and then try to keep some memories alive. The archive was definitely of great help to me, to be able to tell all these stories from the past. And it’s not only about family memories or personal memories, but also about historical time. My father took part in so many important events. In my film, time becomes the metaphor of something tangible that you can store in boxes. Of course, time is memory and also today’s reality. Through film we can speak about our lifetime; how long we live, how much we do in this time and what we leave behind. Time is history and history talks about our identity.

His archive seems like a very fascinating mixture between intimate memories and the chronicle of a certain era. How did you choose the material for your film?

It was a long process to select the archival material for the film, because I didn’t want to be too explicit or only illustrative. And I didn’t necessarily want to use the archive in a chronological way. I wanted to be very poetic and metaphorical as well. It was not easy, because first of all it definitely is a very personal way, I made some connotations only in my mind, probably they are not the same for other people, because I know the places and the faces. That’s why it was probably difficult for me to get detached and then reattached vis-à-vis the same footage.

Did you make any surprising discoveries in the archive?

In the archive were some pieces which were a total surprise for me, but not many. Mostly I knew the personal footage, because when we were kids, our family used to gather to watch the films which my father made. He was filming us and then we made special nights for screenings; it was very funny and nice, and we were laughing a lot. So I knew a lot of them, but some of the others I didn’t know. Probably I have a different approach to this archive as well, because I was taking part in the process of making it. But it was a great discovery anyway, because even though I’ve seen some of the films, it’s different to watch them now, after so many years have passed.

Timebox is your first film as a director. You told me that you used to be a photographer, but now mostly work as a documentary cinematographer. How did the work as a cinematographer shape your way of directing?

If you’re a cinematographer in a documentary, you cannot just be a cinematographer, but have to get in touch with directing anyway, because in the documentary it is your decision what you film and how you film it. You discuss with the director what you want to shoot, but the way you’re shooting is your own decision.

What impact did your father’s style have on your work?

He had a huge influence on me, especially during my student years, but it’s very strange how it all happened. I didn’t want to make documentaries and I never wanted to be a director; I just wanted to take pictures and be a photographer. I liked filming as well, but I preferred fiction over documentary. My father didn’t try to influence me, but the environment in which I grew up somehow influenced me. In the end it was my decision to move in this direction.

I remember that in the second year of university we had to make this documentary and I enjoyed it a lot, because it was an adventure, it was something different. The documentary was about some alpinists who were cleaning windows of high buildings to gather money to travel and visit the Kilimanjaro. At some point I had to jump from one building after a five minute-instruction how to use the belt and some other equipment; it was great, like bungee jumping, but with the camera in my hand. At that time, we used to work on film, it was 16mm as well. It was a camera that my father had given to me. And when I told my father what I had done, he was concerned that I had dropped the camera. For him it was important not to lose and break the camera, not me. And after I finished university, two or three years later, I started filming documentaries. Then I never wanted to switch back to anything else, because the process of filming documentaries is the most beautiful one; you meet people, encounter places and situations. The process of it is much more beautiful than the product in the end, the film itself.

Would you like to continue working with the archive?

I want to work further with it and actually exhibit all these things. My great dream in this life is to make a small intimate and interactive museum of photography. But it is difficult, because people from my home city are interested, but not the ones with money. I had a screening of this film there in November and after the screening some young people came to me and asked me to do this museum there. They wanted to help me and gather some money which is nice, but still not enough. But this is what I want to do, to keep all these memories, not only on screen, but in a small museum. Because in those boxes he also has photo cameras, film cameras and chemicals he used to work with. Everything is perfectly stored in order to show the history of photography, the way it used to be, until now. He made the whole collection with a very clear mind of what he’s keeping there, it was not random stuff. He has other artifacts too, because he liked objects. He would go to the flea market and find old photographs of other families from the 19th and 20th century. He also collected magazines and books about photography from around 1901, and of course there is his own work. There is actually a small museum in these boxes, a small one, but good enough to be nice. And he very much wants to do this, it is also his idea. I remember that one time he told me to have a divine sponsorship and then create this house of photography. Of course, there is no society anywhere in the world where people just knock at your door and give you one billion euros. But still I don’t think it’s normal what’s happening here, where they will just kick you out of your home and not care about your stuff. Actually, there are forty years of history of this city in this archive and they don’t care about it.