Confessions of a Witness 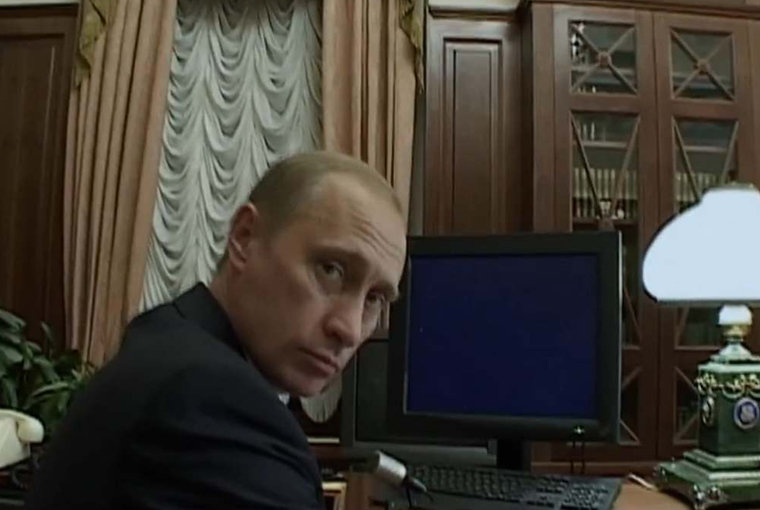 In his latest documentary Putin’s Witnesses, the Latvian-based Russian filmmaker Vitaly Mansky tries to reassess footage he shot of Vladimir Putin’s ascent to power at the turn of the millennium. Back in 1999, the director was working for a state television network which granted him reality-TV-like access to the Russian president, who was then serving as Prime Minister under the Yeltsin government. Although the almost twenty year-old footage never quite qualifies as revealing “history in the making”, the intimacy of the behind-the-scenes moments in the campaign offices, in Putin’s car, and the private home of Boris Yeltsin, are stunning on their own. Whether the historical banality of the footage, however, was an inherent part of that moment itself or whether the autocratic potential of Putin’s leadership could have been obvious had one had – the benefit of hindsight aside – just looked closer, is a debate that even historians seem to have a hard time answering. Were Mansky as filmmaker and the Russian people at large, really passive witnesses to the restoration of the totalitarian system that was not only already in full swing but also conspicuously mediatized to provoke a much needed time of outrage? Or was it an erratic time of discontinuity and irregularity, perhaps even a forward-pushing time of hopes and promises that were only broken gradually and in much less transparent ways?

The view on this question is far from unambiguous. Nevertheless, many historians who have tried to make sense of Putin’s ascent to power have depicted it as a much less straightforward moment than Mansky does in his film. In fact many writers are more troubled trying to understand how improbable the rise of Putin really was, given the political, institutional and personal circumstances of Russia and of Putin himself. In her book, The Man Without a Face: The Unlikely Rise of Vladimir Putin, Masha Gessen describes the moments leading to Putin’s presidency as “accidental.”1 Gennady Seleznev, speaker of the State Duma (Russia’s lower house of parliament) put it this way: “If Yeltsin declares someone his successor, it means putting a cross on his political future.”2 This had happened before. Whenever a politician garnered too much attention, Yeltsin would cut his potential rival down to size. The Kreminologist Richard Sakwa gives several reasons for Putin’s “unlikely path to power”, some of which cannot be seen in Mansky’s movie, such as Putin’s firm stance on the war in Chechnya, the unanimous support he got from the Kremlin, or his taking credit for economic growth. But he also gives at least two reasons for Putin’s success for which Mansky’s footage provides visual support. The first is that Yeltsin’s declining health had allowed Putin to dominate the political scene with more freedom than his predecessors. This shift in power dynamics can clearly be seen in Mansky’s film. Not only does the film capture an ailing Yeltsin, but in one of the most remarkable moments of the film, he gets humiliated by Putin who refuses to receive his mentor’s congratulating call upon winning the election. The second is that Putin quickly came to represent Russia’s president of hope who cared more about Russia than about his personal interest, and who had the talent to unite hitherto opposing political ideas such as Communism and capitalism; soft and hard diplomacy; technocracy and populism. The most striking example for this double-edged political strategy in Mansky’s film is Putin’s effort to restore the Soviet national anthem. This controversial gesture could easily have backfired as a regressive or naive return to Communist ideals. Instead of showing any signs of nostalgia or plans to resurrect the past, however, the president explains that he wants Russians to be less ashamed of the past and remember the Soviet Union with more pride. “Think about the victory in World War II rather than the gulags,” he tells the camera. This communicational strategy is effective, as it speaks both to older generations who may have had a harder time forgetting about the past, as well as to younger generations who are in need of a new national identity. As a newspaper article put it, “Putin must restore what Yeltsin destroyed: pride to feel part of a great power. Russians want respect, not sympathy.”3

Nevertheless, this discursive double-game is not, as Mansky wants to convince us, a premonition of Putin’s authoritarian leadership. The media played a major role in establishing a false image, or mirage, of the president and Mansky was not the only journalist to feed the Russian population with home-movie-type shots carefully molded to fit the needs of political consumerism. The dangers of this strategy are obvious; it replaces information about policy decisions with a personality cult and nation branding. Putin was not the only political leader who substituted policy development for news management. Bill Clinton in America, Tony Blair in Britain and Gerhard Schöder in Germany were also highly effective in clouding the policymaking process in a dense fog of spin and show. Oddly though, this is not what Mansky’s film is about, as he does not primarily question the practice of the media but the spectators’ ability to see through the fog of disinformation and recognize the man for who he turned out to be.

The problem of the film thus seems to be philosophical. It concerns the role of causality Mansky ascribes to his historical explanations. Putin’s ascent to power and Russia’s subsequent regression into what Boris Nemtsov has called “a one-party system, with censorship, a puppet parliament, the ending of an independent judiciary, firm centralization of power and finances, and a hypertrophied role of special services and bureaucracy, in particular in relation to business”4 can hardly be considered an explosive political paradigm shift, nor can the lack of an equally explosive public response be seen as a form of democratic negligence. While Mansky may be justified in showing regrets that there had not been enough public and institutionalized opposition to Putin’s coming to power, the quality of being a witness to the events depicted in his films is hardly a sufficient causal condition or trigger for later events, especially the notorious “disappearance” of the members of Putin’s election campaign team who would go into opposition. Instead of associating their later fates with the events of 2000 and thus propagating a form of historical determinism, it would have been more coherent for Mansky’s j’accuse against the passive bystanders of time, had he not left the subjects of his inquiry off-camera and concentrated more on the real effects the media did have on “the witnesses”.

Ultimately though it may be more helpful to understand Mansky’s film not through its historical premises, but as a contemporary wake-up call. Independently of who is to blame, it is undeniable that Putin led Russia into democratic derailment and his presidency into a dictatura perpetua. With the protests that started last year, one can only hope that a sense of responsibility for the political future of Russia will continue to spread and turn witnesses into democratic actors.