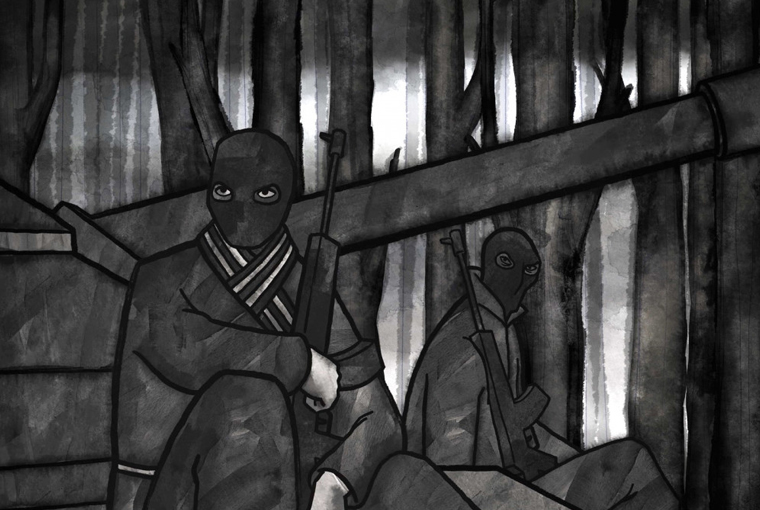 In 1992, news reached ten-year-old Anja Kofmel that her older, adventure junky, journalist cousin Christian Würtenberg, was found dead in Croatia. The country’s declaration of independence alongside Slovenia in 1991 had led to clashes with the Serb-dominated Yugoslav army. At the time of Chris’ death in ’92 (he was 27 years old at the time), the Yugoslav wars were already in full swing. Chris was a journalist whose experience and personality was enough to earn the respect of some fascinating people, but not enough to prepare him for the messy, personal and emotional civil war that ravaged the Balkans and ultimately, himself. Whatever it was that he went through, it was enough for him to abandon his role as an investigative observer for one that came with a military uniform and a strangled neck. His comrades claimed he was attacked anonymously, the Swiss media steered clear of what could have sold them a lot of papers, and Anja’s family avoided questions that have laid dormant for years. Now a grown woman and illustrator, Anja wants to bring Christian’s story out of the dark and into the light, but her film only just manages to tease it out into the shadows.

This is not to suggest that the project is a failure. The debut feature-length film unites archive material, interviews, original footage and animated sequences into a captivating watch. Yet, Kofmel documents a journey into the past that is as plagued with emotional subjectivity as ex-Yugoslavia was with ethnic tensions at the end of the 21st century. This subjective approach is of course what makes the film unique and it is openly epitomized in the illustration that embellishes and interprets the insufficient source material. The director makes it clear that her drawings represent her own imagination, resorting to a monochrome palette devoid of the color and complexity that only the truth can bring to life. These illustrations generally interact with the documentary footage to depict what it is unable to. A striking example is when Chris’ military companion, Alejandro Hernández Mora, gives Anja the idea that Chris had begun to bother the group he was moving with. Her pen is quick to depict a scene where he complains and rebelliously climbs out of the trenches to smoke a cigarette in the open before dark ragged forms burst through the snow until Chris is completely surrounded and lost. Indeed, most of the animated scenes carry this feeling of loneliness and confusion, and while Chris undoubtedly experienced such emotions, it seems that the source is more so Kofmel than Würtenberg. In trying to uncover and unpack a story that is so personal, with so many missing pieces and so many unsavory dealings, it is Anja who feels helpless and lost as she imagines her cousin to have been.

Still, the kind of man to have been involved in the extraordinary circumstances that Chris was, is not the kind of man that can be explored by looking at a few home photographs and retracing his last footsteps. Chris had made a mark in the memories of notorious international war-criminals, and is listed on a Croatian list of Foreign Volunteers killed in their civil war. ‘Chris the Swiss’ had darkness in him, morbid fascination and a taste for taking risks that attracted him to the darkness in the world around him. Already at the age of 16, he somehow made it into the South West African Territorial Force in Namibia, a counterinsurgency force that had been deployed in the region by South Africa.

If Kofmel’s drawings do try to tackle the sombreness that surrounds Christian Würtenberg, the black, violent forces that penetrate the animation remain external to her idol, thus depicting the general failure to integrate more complex shades into his character. Behind the tight-lipped family interviews as well as the furtive, uncomfortable glances of those who knew him, there clearly lies hidden information. It would seem the majority of those who knew him, want to understand Würtenberg as a sensitive, intelligent young man who was destroyed by the world’s darkness. Even though his story is often confusing, it is clear that this assertion is far from the simple truth. Yet Kofmel and her family are clouded by their love for Chris and consequently, so is the camera.

The animation expresses this reality fairly honestly and allows viewers to remain aware of Kofmel’s influence over the narrative. What is more subtle, quite possibly unintentional but nevertheless problematic, is the fixation on Eduardo Rózsa-Flores that pervades the archive footage. Otherwise known as Chico, the Bolivian journalist-turned-vigilante-soldier was the man who founded the ‘First Platoon of International Volunteers’ (PIV), whose uniform Chris breathed his last breath wearing. Labelled as ‘loco’ in one of the featured interviews and killed in response to allegations of plotting to kill Bolivian president Evo Morales, it is easy to blame him for his role in Christian’s downfall. It is also easy to understand why the latter’s family would want to establish him as the film’s bad guy. The reality is however, that this bias stops the director from investigating a key character whose Hungarian-Croatian heritage and professional journalistic background may explain his involvement in the conflict and possibly that of Christian.

Instead, Chico is introduced to the viewer in cartoon format, as a character that needlessly attacks a bewildered Chris upon his arrival at Hotel Intercontinental. This establishes Chico as unpredictable and unwanted from the very beginning. The proceeding archive footage, supposedly more trustworthy than the illustration, fixates on Flores and links him exclusively to violence through his military clothing, military training sessions and plot to murder Bolivia’s president. It is a heavily biased character construction that leads the audience into a spirit of conviction about his character rather than one of questioning. It is topped off with Chico’s unconvincing explanation of Chris’ death that affirms what has been suggested. Kofmel would do better to ask how a trained journalist ends up joining a guerrilla force that is involved in targeted killings of civilians. It would also be interesting to consider the implication of international impotence in preventing the bloodshed. In 1990 Croatian president Franjo Tudjman officially labelled Serbians a minority, which bolstered the Serbian nationalist propaganda of self-defense. It was not until 1992 that the United Nations began to intervene in Croatia, by which time violence and hatred were deeply tangled up in the ethnic and religious communities of the area. The fight had gotten so bloody and out of control that a visiting journalist from Switzerland felt the need to act where international alliances would not. By the time international organizations began to be heavily implicated, men like Chico had already had the chance to take matters into their own hands. In neglecting to meaningfully explain this broader political context in her documentary, Kofmel too has created empty, neglected narrative spaces that remain unexplored.

Despite the emotional and political limitations of the film, Chris the Swiss documents the devotion and the effort that Anja Kofmel accords to uncovering a story. The director successfully secures interviews with Christian’s fellow journalists, criminal contacts, and the family members he left behind. These people all agree to talk to the camera, yet almost all of them seem to be holding something back. Heidi Rinke admits that she shut down her last interview with Chris due to a bad feeling. Christian’s British friend Paul Jenks tried to investigate and photograph the scene of his murder but met the same fate himself. ‘Carlos the Jackal’ claims Chris was working for the Swiss government but goes no further. Is Kofmel wise in her hesitation to dig deeper and investigate more objectively? Christian’s brother insists that no story is worth dying for, and it may be a clue as to why nobody has dared to pick up the loose ends in order to find out where they lead.

It is more fitting to conclude that Anja Kofmel’s film struggles to go further because that is precisely what the film is – a struggle. As the personal voice-over suggests, since the age of ten she has been haunted by her role model cousin’s death. Her choice to delve into his diaries and retrace his steps across the Balkans, which in turn inspire her illustrations, are indicative of a personal struggle to accept that she did not and never will know who ‘Chris the Swiss’ was, nor what he was involved in. At least now, she has shared her burden.

Dane Komljen's All the Cities of the North (Svi severni gradovi, 2016) 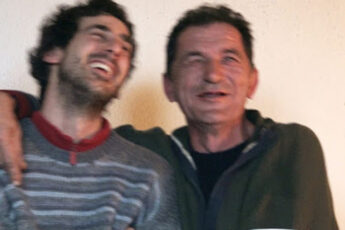