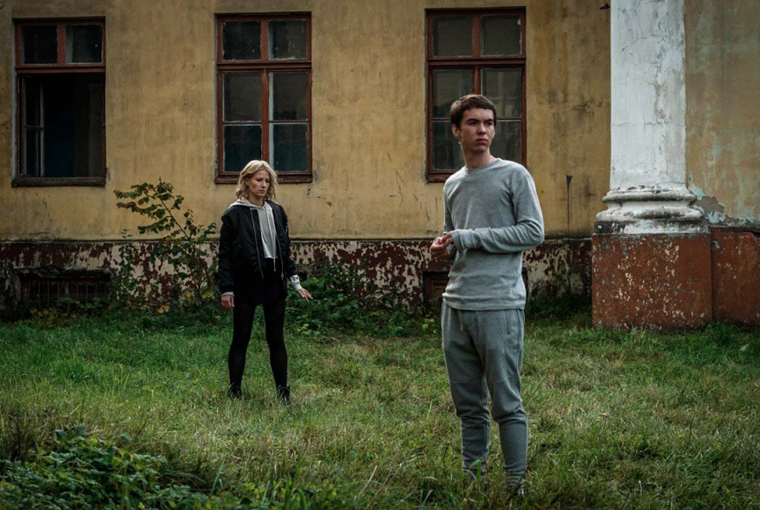 Ivan I. Tverdovsky has been making films at a steady pace for the past six years. His three past films, Corrections Class (2014), Zoology (2016) and now Jumpman (2018), have focused on people who are both physically and mentally different from the majority and depicted the way they are punished for that nonconformity. At best they are exploited, at worst they are outcast and executed. Tverdovsky shows us the entirety of that happy spectrum in his latest film.

Exploitation of the weakest may seem like a simple truth of capitalism. Indeed, as one man who takes pity on the eponymous Jumpman of the film explains to him, “There are those who jump and those who make people jump”. Those who are made to jump, or the jumpmen, are doing so out of choice insofar as the free market makes people go to great lengths to survive. These are simple facts of life. Here, the main character, Denis, is made to literally throw himself in front of cars. It’s as if Tverdovsky took the most obvious example of the consummate thing someone could be made to do, and brought it to life on screen.

Set against the backdrop of modern-day Russia, the film makes this system seem even more surreal and brutal than in daily life. The film begins with a baby box. Young Oksana had left her newborn Denis in one, who was then taken to a nearby orphanage. Perhaps some readers are aware of the existence of baby boxes in many countries throughout the world, but I had certainly never heard of these anonymous drop-off points where mothers can leave their newborn babies to be cared for by hospitals. In a country like Russia, with no obligatory sex education in schools, limited access to contraception in rural areas, and huge gender inequality, the method is still used as a way to prevent infanticides and infant deaths.

When Denis is sixteen, Oksana turns up at the orphanage to take him away. He is suffering from congenital analgesia – an actual disease which manifests itself in the patient not experiencing physical pain. Denis’ non-experience of pain is used as a metaphor for lovelessness, the numb state of a child who was never meant to exist in the world. Often people who have this disease die from either childhood accidents, illnesses gone unnoticed, or most often, burns. Denis has managed to survive and now he is being removed from the place where, though he was used as a toy for the cruel experiments of the other boys, efforts were made to keep him alive.

Denis is initiated little by little into the world of organized crime. His mother has essentially taken him from the orphanage so he can be useful to her, jumping in front of cars of rich or influential people as punishment or to extort money. In Jumpman, those who claim to want to save Denis, especially his mother, are actually intent on extorting money out of him. Rather than murdering him in the womb or as a newborn, Oksana seems intent on killing him as an adult. Here, his death can be used for capital gain and thus the unwanted fetus becomes a useful puppet as a fully formed adult. Both mother and son are further enslaved by his very existence. As so often in Tverdovsky’s films, when marginalized vagrants of society group together, they turn on themselves and each other. The people are products and withstanding is their only way of survival. When the people at the party ask Denis if he really feels no pain he answers, “I feel pain in a different way”.

Denis must also participate in the trials of his victims. These are fake, perfectly directed show trials. Gradually we realize that all the players in the courtroom are the actors we’ve just met in the nightclub – from the judge who presides over the whole affair, right down to the security guards who drag away the shouting victim. In slow-motion we see trial after trial in which the accused writhes in the glass box, while the defense lawyer files her fingernails with a nauseating smile on her lipsticked mouth.

Comparisons are inevitable. One may for example be reminded of the twins in Kristof’s Notebook, who numb themselves to emotional and physical pain through self-inflicted violence and insults. Or last year’s Zvyagintsev film Loveless, in which two parents are so selfishly caught up in their own problems that they neglect their young child. Both these examples point clearly towards a specific political situation which renders people helpless and hopeless. Indeed Tverdovsky said in an interview that the many people who grew up under Putin’s presidency feel the same numbness as Denis does in the film.

But the film is neither a sardonic take on the pitfalls of capitalism nor a criticism of women’s rights in Russia. This is not an intellectual film, but it does not lose its clout because of this. It is personal rather than political and there is a visceral quality to it which speaks to the forsaken child in all of us. From the moment he leaves the “baby box”, to the way he hurts himself again and again, the main character will do anything to make someone love him.

Tverdorsky has a special way of filming isolation. We’re not with the character, for he is most certainly alone, but we can see his pain. It’s well-known that heartache often makes us physically sick, but Denis has no such cathartic outlet. What happens to someone who has heartache his whole life and never feels it? Jumpman is not perfect, and some of the acting is even downright clumsy at times, but the questions it leaves us with outweigh the lack of highbrow perfection.