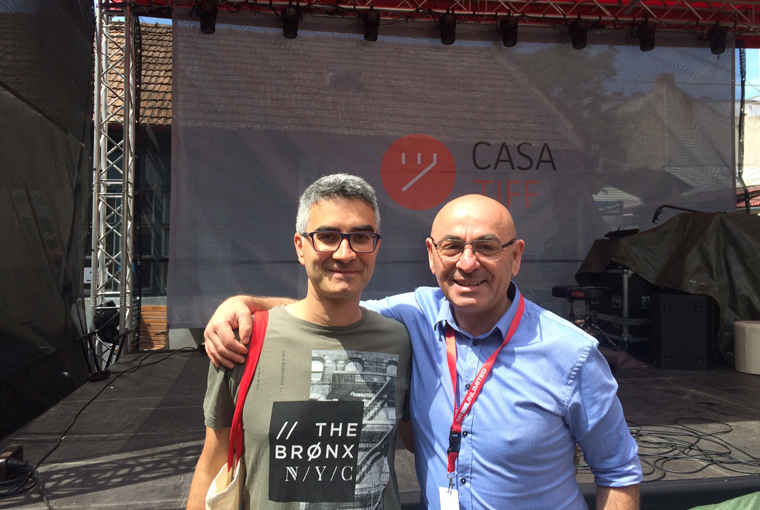 We met Albanian filmmaker Robert Budina (pictured on the right alongside his DP Marius Panduru) during the Transilvania IFF in Cluj, where he presented his feature “A Shelter Among the Clouds”, a plea for religious reconciliation among his compatriots. Budina speaks about his story, and the difficult situation that inspired it.

Tell us a bit about the story of your film.

Albania is a unique place when it comes to religious harmony. It’s been this way for centuries. Many people thought that Communism was what created religious problems, but that’s not true. I studied for three years to understand this tradition. For Albanians family comes first, the place you’re living in comes second, the country comes third, and religion comes fourth.

This subject was always interesting to me. There is a real story from Ottoman times about Catholics and Muslims sharing the same place of worship. These two communities used to live together like brothers in a way.

Another reason I wrote this story is that I have two kids. I myself am Orthodox and my wife is Muslim. Though neither of us is a practicing believer, one day our kids asked us, “What are we – are we Muslim or Orthodox?”. We replied, “It’s up to you to choose”. Finally, when I saw what happened with Charlie Hebdo in France, I thought it was time to write a story like this, to show that if you believe in God, it’s not normal to kill other people.

Did any stories from the Bible or the Koran make their way into your film?

There is a real-life story connected with the story of my film. I was in contact with Muslim communities in Albania to ask them about the history of the region. They told me real stories about what happened over the centuries.

They told me a story about when Mohamed met with a group of Orthodox people in a mosque. They wanted to provoke him, so they told him they were unable to pray because they had no church. He told them they could meet in the mosque.

I was trying to be careful while making this film. But a theologian told me that if Mohamed agreed to this then you can write the story. Another story goes that hundreds of years ago the most important priest and the most important imam in the region were friends. When the priest died the imam spoke at his funeral to show how much he respected him. Such a friendship also proves that such events could be possible.

Do you think it would be possible for Muslims and Christians to share a church today?

Yes, it happened two or three times that Muslims paid to build a church in Albania because they had more money than local Christians. Another story goes that 200 years ago there was a mosque in South Albania named after Saint Alex. Saint Alex was a count who didn’t have any children at first. One day someone told him, “If you build a mosque, you will have children”. And so he paid for this mosque to be built and then he had three or four children. In Korça where I’m from – in Southeastern Albania – the church and the mosque are very close, the difference between the two is purely symbolic as far as I’m concerned.

Do you think Christians and Muslims get along better in Albania than in other European countries?

It’s hard for me to say. I do have some stories from the shoot of my own film in Albania. For example, everyone who plays the role of Christians in my film are actually Muslims. They agreed to act as Christians. They all made the sign of the cross, except one woman who couldn’t bring herself to do it. She does say “God bless you” to Besnik though.

The locals asked them how they knew the film was anti-Islamic. The locals trusted me, they said, “We know Robert, he is a good man, he would never lie to us”. Matters came to a head and the locals from the village had to threaten to throw the people from Kosovo in the river if they didn’t leave.