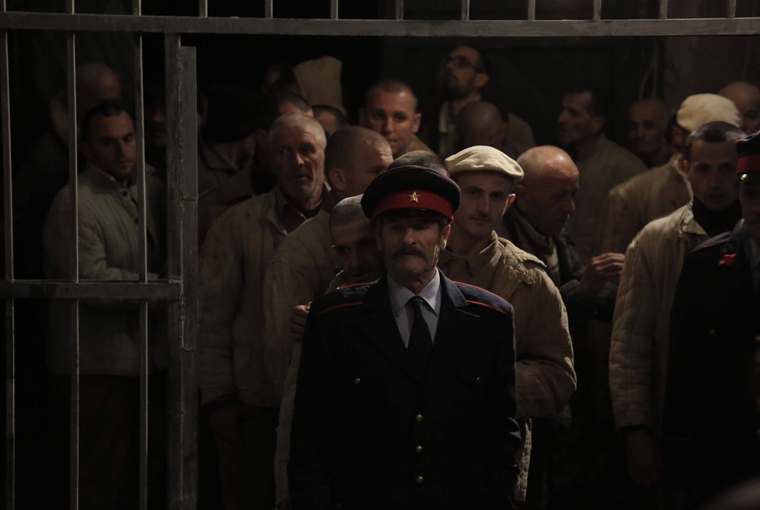 When Albania was still known as the People’s Socialist Republic of Albania, professor and political dissident Leo (Viktor Zhusti) had been kept behind prison walls for fifteen years. Come 1990 and he is suddenly released and escorted to Tirana by party official Spiro (Ndriçim Xhepa) and militiaman Asslan (Xhevdet Feri). The interim government, which quickly understood that being open towards the West was the new path to securing power, needs the professor to testify in front of a state visit of some European political institution. And thus begins a bumpy journey through the absurdist logic of regime change which Alimani fittingly represents through the metaphor of a broken car. Once the old engine of the ARO 244 breaks down, everything else collapses with it.

Stranded in rural Albania, nothing seems to work. The telephone in the nearby village is broken and the local mechanics are utterly incompetent, parabolic episodes neatly capturing the inefficiency under the Hoxha regime. Meanwhile Leo is trying to make sense of his situation. In “normal times” a special release from prison usually didn’t end well, but the professor starts to liven up. With his ironic attitude, he represents the dissident intellectual whose political survival is determined by moral superiority. “I was in prison,’’ he tells his companions. “But you are in prison and you don’t know it.” The hefty Asslan, on the other hand, symbolizes the Stalinist past. He is authoritarian and suspicious of everyone without party rank or ideological insignia. Lines like “the river sleeps, but the enemy does not”, which are delivered in response to Leo’s accusations against the Communist party, make him the perfect party apparatchik. Caught between the two is driver Spiro. He represents the politically passive but good-hearted working class – too busy doing the labor required to keep the engines running to engage in ideological warfare. Unsurprisingly he is the only character who describes their situation adequately, revealing to one of the suspicious mechanics: “He’s a political prisoner. The big boss wants him, it depends on him, whether we enter Europe of not.”

As the trio’s arrival in Tirana is delayed, the French-speaking head of the film’s titular delegation, Mr. Loherin (Richard Sammel), meets with party officials who clumsily stage their acquaintance with the professor. But the spectacle goes both ways. The foreigner is not a Frenchman at all, but rather a fellow Albanian who escaped to France after Albania had left the Warsaw Pact in 1968. Mr. Loherin had been a classmate and close friend to the professor while they were students in Prague. As everyone is trying to figure out whom they can identify as a friend (or as an enemy) and how to seize the opportunity to gain power, the hope for repair diminishes.

The stand-in dialogs of the main characters and the claustrophobic space in the car provide for humoristic quid pro quos. Some of the best scenes of the film are provided by small-talk disguised as political attacks. These verbal confrontations also contribute a good deal of dry humor and absurdist situational comedy reminiscent of recent Romanian films dealing with regime change (viz. 12:08 or The Paper Will Be Blue). The ingenious script for Alimani’s film was written by the director Artan Minarolli (1958-2015) several years ago. Visually, however, Alimani’s film relies on shallow focus and a palette of ochre colors – a polished cinematographic approach that contrasts with the minimalist screenplay. The opening scenes in the prison camp, for example, almost feel like Son of Saul and could have been more truthful to the tragicomic elements of the story were they shot, say, from a more distant and static standpoint.