Sonja Prosenc on History of Love

We met Sonja Prosenc at the Karlovy Vary International Film Festival, where her feature “History of Love” screened in the main competition. We spoke to Prosenc about her new approach compared to her feature debut, her new film’s main themes, and its style.

Your last film which was featured at Karlovy Vary, The Tree, was more atmospheric than your latest film, which seems to be much more plot-based. How did you make that transition to a straightforward plot-line?

I think it was a natural transition. I never saw telling a really complicated story to be the aim in this film, but rather my goal was to build a different cinematic experience which relies on the very subjective experience of the main character. Even though there is a story-line, my main approach was to follow her in her state of mind. The dramaturgical line didn’t rely on the story itself but on the psychological journey.

This is why I chose a non-binary approach. I don’t call these sequences flashbacks or anything like that. It’s very important to see which shot or sequence followed the next and to connect this with the sound, so often we took sound from one sequence and layered it over the beginning of the next one. The sound designer from Norway first used the word “meandering” to describe the sequence, he said “Now I realize, it’s about memories, not about jumping back and forth”. It’s really about portraying Iva’s complex experience of reality. Life never happens to us in a linear way – for example, we are sitting here now but in our mind and in our emotions many things are happening.

So for you the film is about memory?

It’s about people who are trying to deal with loss in the light of a new discovery about the person they loved. What is behind that is not social commentary, but it originates from reflecting about things like nihilism, emotional detachment and violence. All of this prevents us from mourning. Mitja Ličen [present at the interview] is my DoP, but we’ve also been in a relationship for the past 15 years, we lost a loved one during the filming, but we didn’t want to tell the whole crew so we felt all this pressure to smile and make things simple for those around us. In many cases because of all of this we suppress our most intimate emotions.

Could you please talk a little bit about the sound in the film?

There are some narrative details that are connected to my life. That of water for example. I was a swimmer and when you spend such a big part of your life in this element, in a way you are isolated from the rest of the world. I imagine it is similar with hearing. You can turn off the world. So it plays a part in the way she perceives sound. Water was also an important element for the way the film flows. The Tree was really static, rooted like the tree. History of Love was fluent like the river. The sound adds a lot to that, especially when it’s a bit different from what you expect, and it takes you to other places.

What about the choice you made to blur faces of characters in the background?

It’s mostly connected to her isolation and emotional detachment. You can sense the underlying need to connect with other people, which eventually happens to her with the conductor. The reflection behind all of this is about alienation in society. This formal approach steps a little bit away from very conventional story-telling.

When you were writing the script, were you already conscious about showing subjectivity through sound and the camera?

[DoP Mitja Ličen replies] When I was shooting The Tree, I was like a tree branch, filming from the shoulder but static. Now it’s much more fluid, so I was changing perspective a lot. I chose to blur the background to isolate her more. Those were all conceptual ideas, and I think it worked. With the sound we had this concept, but when you have other authors around you they bring so much more. The sound designing takes it to the next level.

Does the actor who plays the conductor, Kristoffer Joner, have any experience directing musicians?

He was training for months. He had his personal conducting instructor. He had remarked that many times musicians noticed that it’s not correct so he spent months exercising and practicing.

Why did he speak English?

Usually it’s foreigners who direct national orchestras in Slovenia. I really wanted him to be someone who came from another world from the main character’s point of view. So the only thing they have in common is this person that they both loved.

How did you decide on the music for the film?

I had already chosen the Bach piece at the beginning before I wrote the script. I wanted to create an atmosphere of nostalgia as if to say good-bye. For the conducting and the concert in the theater it’s actually a well-known Slovenian band who did the music. I chose this music because it’s classical, but also contemporary and a bit dark. 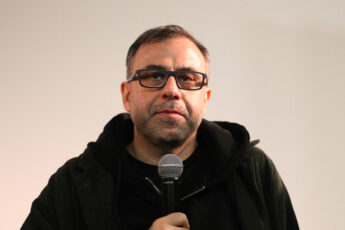