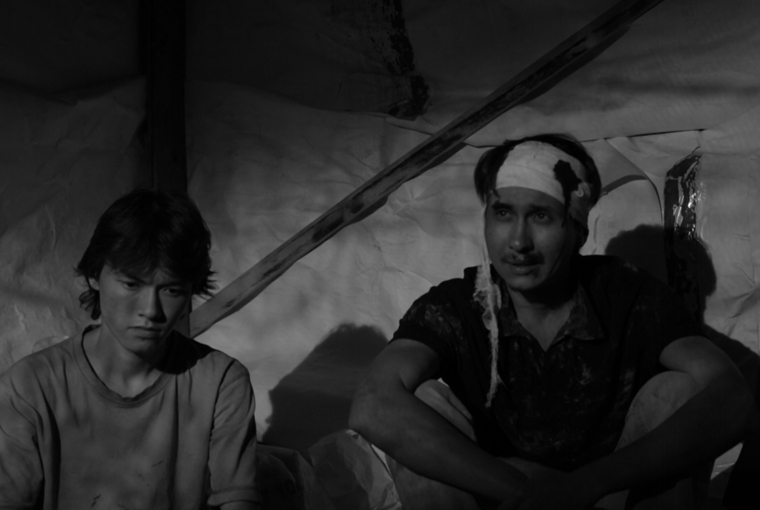 Constructors is Kazakh director Adilkhan Yerzhanvo’s second feature film. Shot in black and white, it tells the story of two brothers and their little sister who all get kicked out of their flat in the beginning of the film because they can no longer pay the rent. Luckily they still own a small piece of land somewhere in the middle of nowhere where they decide to settle. But a new law that disowns landowners if they don’t have at least the foundations of a house on it makes their life difficult. The three protagonists are determined to stay there and so they start constructing. The film gets more and more surreal, when a new law passes stating that, in addition to the foundations, there must also be walls.

The idea is perfect. Yerzhanvo’s film is a parable for government cruelty, and an appeal to its victims to fight back. Instead of showing how unfavorable political circumstances can force people into depression, or even defeat, Yerzhanvo’s heroes are courageously stubborn and creative in their will to resist. The fact that they have to steal to build their home is not treated in melodramatic fashion, say for instance with neorealist pathos: what has been done to you, you do unto others. Yerzhanvo is more pragmatic. Shot in a dry, observational style, the movie recalls Kaurismäki’s latest musings on solidarity (Le Havre, Helsinki Trilogy) in an increasingly scrupulous, and oppressive dog-eat-dog world.

Constructors has some minor flaws. Although the movie is basically an outdoor kammerspiel focused on the three orphans, the film doesn’t succeed in fully shaping its characters. At one point, shots depicting the progress of the construction site seem to be more important than dialogues between the characters. In a movie barely over an hour long, these shots are at the expense of the actors who are never able to turn into real personalities. The foundation was there, but the courage was missing go through with it.