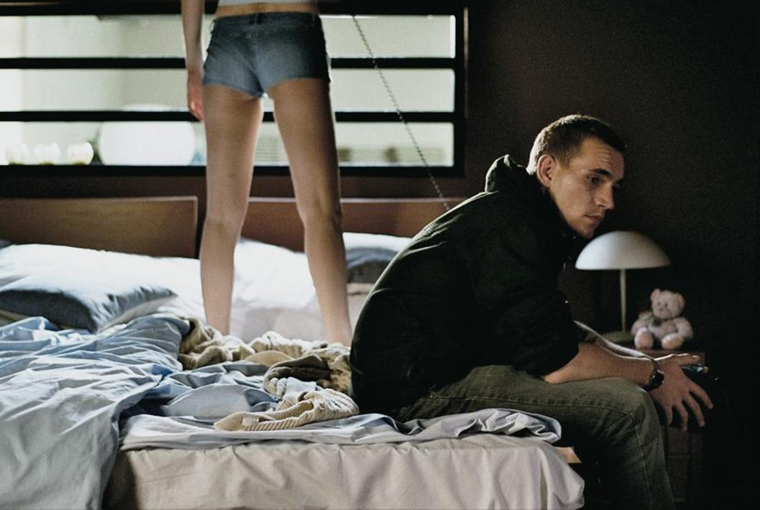 Benedek Fliegauf’s Dealer (2004) depicts a day in the life of an anonymous drug dealer (Felician Keresztes). For convenience, let’s just call him the Dealer. The Dealer is in his late twenties. He wears jeans and a skater raincoat, and pays personal visits to his clients on a speed bike which makes him look more like a yuppie than someone in the drug-dealing business. A story develops on the way. One of the Dealer’s clients has a little daughter, and he may be the father of the child. With a junkie mother, the child is threatened to be sent to foster care confronting the film’s aloof hero with responsibility and pity.

Most of the clients the Dealer visits call him for drugs plus some related event that deals with emotion. Another client, a wealthy young woman, also seems to enjoy the Dealer as a lover. But other extra-professional incidents leave him cold. When a student calls him for help because one of his friends didn’t get back to normal after eating a portion of mushrooms, the Dealer tells him not to call him anymore and to erase his number from his phone. In the background, we see the friend fidgeting with epileptic-like spasms. Other clients include the Dealer’s father, who is unable to get over the death of his wife, the leader of a religious sect, a euthanasia-craving man in a hospital, and the Dealer himself.

Illegal drug trade as a film genre usually divides into two sorts: those films depicting the flashy life of badass gangsters (Blow, Scarface, New Jack City, Goodfellas), and those showing unsightly attempts of trying to get there (Bullet, Clockers, City of God). Drug lords or crack corpses, both genres need guns as props, dark nights as a setting, and low-class characters to romanticize or mourn those who stray from the right path. Fliegauf neither shows guns nor money (only one scene depicts a client rummaging in a pile of coins); there are no cops, gang wars, bling bling or dark alleys. Dealer is neither a morality play on greed nor empathy porn about the miseries of a profession. This is drug dealing European style.

Fliegauf’s underground is sobering and dull. It is not clear where Dealer is taking place, a way to show that this story affects all social classes and neighborhoods. The Dealer is a classic everyman, not tragic but sad; a figure in the spirit of Willy Loman who embraced the goal of becoming rich but found himself destroyed by it. So too, the Dealer appears to do just another job, which has some good but mostly bad sides, the worse being that it ruins him. No kidding about the good sides: the much-discussed ethical question about the justifications of euthanasia comes up; and half of his clients including himself seem to get by pretty well. In what way is the Dealer morally different from say, real estate deals à la Glengarry Glen Ross?

One wonders why Fliegauf found it necessary to “mystify” his story with dreamy Lynch-like sequences. In almost every scene (not depicting the Dealer on his bicycle), the camera circles around the film’s characters as if they were sculptures in a museum. A cryptic soundscape of winds in a three-tone sequence turns the whole thing into a metaphysical experience. Fliegauf himself may believe that there is much more going on in his film than the petty endeavors of a man just trying to get by. But creepy noises and ominously significant traveling shots don’t compensate lack of depth, especially if this lack is precicely what is supposed to be shown. Again, there’s nothing transcendental, bizzare, dark, etc. in drug dealing. Drug trade is not an unsubstantial part of Hungary’s GDP (as of that of most other countries). In 2004 when Dealer was shot, Hungary’s drug trade business can be grossly compared to the country’s aviation sector (everything related to traveling with airplanes) which contributes a little less than 1% to the country’s GDP. Some people may have nostalgia for the thrilling days of clandestine drug dealing. But the mystifications aside, Fliegauf’s movie shows that selling drugs may very well have gone middle class.