An Aestheticized Vision of Turn-of-the-century Medicine 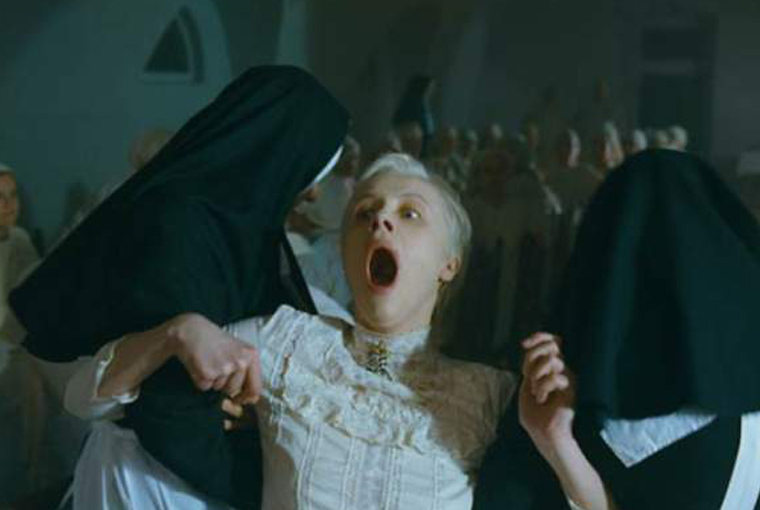 Morphine addiction, sexual relationships with the mentally ill, abusive nuns – János Szász’s Opium uses every trick in the book to give itself edge but only regurgitates clichés.

Set in a Hungarian mental institution for women in 1913, the film focuses on the horror of turn-of-the-century medical practices in the first few scenes. We see a woman attached to a machine that dunks her into a vat of water, a graphically-shot frontal lobotomy, and a crowd of women pressed against the bars of the asylum. The camera lingers on one of them, a tall blonde styled à la Annie Lennox (Kirsti Stubo) whose wide eyes and quivering full bottom lip catch the gaze of a new doctor (Ulrich Thomsen) arriving at the asylum. In the few seconds that they stare at one another, the plot is announced: this will be an ambiguous doctor-patient relationship, this will be a doctor with humanity, this will be a woman who changes the doctor’s life. These are our protagonists.

Dr. Brenner (the new doctor) enters the asylum and soon meets the prison director, a serious man with a well-kept mustache who declares that psychoanalyst Brenner “may find my own practices medieval”. This both foreshadows the director’s role as a two-dimensional evil foil for the rest of the film and the dichotomy that informs the cinematography and plot: psychoanalysis/modernity=relatable, turn-of-the-century medicine=bad.This dichotomy becomes particularly evident as Brenner engages in activities that current-day audiences won’t have to struggle to understand: playing the piano, lurking around his apartment naked, chain-smoking, and trying to write a novel. A turn-of-the-century hipster in dystopia.

Brenner’s female counterpart is Gizella Klein, the Annie Lennox patient who’s been interned in the asylum for the last ten years. Diagnosed as severely psychotic, she writes obsessively, scrawling her narratives on the walls of her cell, the shower, and a heap of journals. Her texts consist primarily of a sort of Voldemort fan-fiction about the devil’s carnal plans for her. In her free time, she emits crazed screams and masturbates with pencils.

The plot begins with Brenner being assigned the treatment of Gizella. She becomes fascinated by him for unknown reasons; he becomes fascinated by her writing. He plans to plagiarize her journals for the purposes of his own writing career, while she starts to believe that he loves her and will make her his wife. This mutual interest reaches a head during a medical exam, when Brenner blindfolds her naked with his tie so he can test her hearing (no joke). Although no physical contact is made, Gizelle sexily whispers her sexual fantasies of the devil to Brenner as she masturbates blindfolded, and we know where this is headed.

The film is narrated by each of our protagonists. Gizella falls further under the illusion that they are married while Brenner becomes further alienated from his colleagues, both because of his treatment of Gizella and his increasingly obvious morphine addiction. Eventually Brenner is forced to choose whether to succumb to Gizella’s wishes to be lobotomized.

The film has fantastic potential. Ulrich Thomsen, the male lead, has performed exceptionally in the Danish psychological drama Festen (1998) and is an asset for any film. The script is drawn from the real-life autobiography of a pre-war Hungarian neurologist, which would suggest that the film could truly represent the life of doctors during the period with humanity and truth. And yet this potential is wasted by a script that allows Thomsen little creativity in his main tasks of injecting drugs and brooding. Instead of profoundly examining the lives of doctors and patients, the script lets character development fall to the wayside to focus on the goth/SM aesthetic of the doctor-patient sexual liaison. The links between female sexuality, subordination and mental illness are troubling at best.

Nor does the cinematography redeem the film. It seems to suffer from schizophrenia more than Gizella herself, as the camera simultaneously obsesses over inhumane medical practices (with countless shots of sharp instruments piercing skin) and romanticizes them with the glossy sheen of a Hollywood blockbuster period piece. In fact, when the camera lingers on the lead actress’s ghostly white (and flawless) skin and trembling lips as she watches Brenner play piano for a room of mentally ill women, it is difficult to believe that the screenwriter didn’t just set a scene from the BBC miniseries Pride and Prejudice in a pre-war Hungarian asylum.

Although, ostensibly, the film should provoke sympathy for the characters it represents, it is hard not pitying the actors. How was Kirsti Stubo to know that she’d be filmed as a purely sexual object, or Ulrich Thomsen to know the impotence of his role? The film is more dangerously dull than life post-lobotomy – audiences should avoid it like a hole in the head.