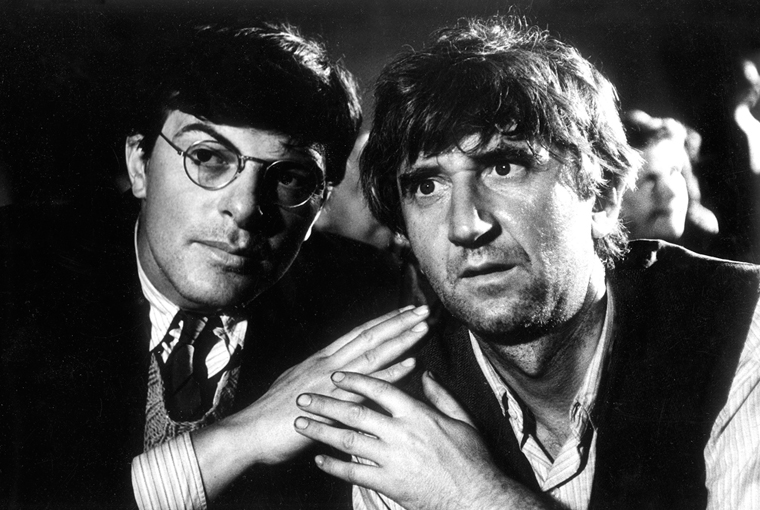 Less popular than his New Wave colleagues Věra Chytilová, Miloš Forman, Jiří Menzel, Jan Němec and Ivan Passer, Evald Schorm was one of the most vocal critics of the Czechoslovak regime, ceaselessly depicting the struggle of individuals overwhelmed by a society devoid of compassion for the Other. In Return of the Prodigal Son, one of his most eminent works, a man is taken into a psychiatric clinic after he attempts to commit suicide for external reasons that gradually crystallize in the comportment of his environment: normality, complacency, conformity. In Seventh Day, Eight Night, completed in 1969, this ambition reaches its peak, as Schorm takes on the challenge of depicting the violent breakdown of Czechoslovak reformist aspiration that is known as the “Prague Spring”. As one would expect, the censorship apparatus was quick to confiscate the movie which, as a consequence, wasn’t shown before the Velvet Revolution (and which Schorm, who died in 1988, never saw completed) – wrongly, as it turns out. Not just for the trivial reason that censorship is categorically wrong, but in equal measure because this film doesn’t fulfill its intention: Schorm’s rushed script embodies a failed political allegory which is faced with too great an ambition to be squeezed into a political climate where means of expression are well-surveilled. Any viewer who succeeds in leaving academic contextualization (or the DVD cover text) behind will realize that this film is not about 1968 at all – whether it aspires to be, or not.

The plot is set in a small, nameless village in Czechoslovakia which is (literally) shook with fear when a number of bizarre events suspiciously coincide: the train station master disappears, an empty train is spotted on the tracks near the station, the electricity goes off, a theater group arrives in the city etc. However, counter to what one expects from a nominal allegory to 1968, the villagers respond with varying degrees of integrity – Schorm doesn’t unfold his parable as a victim vs. culprit clash. On the contrary, it’s the villagers who victimize themselves by approaching problems without probity or reason: a gang of crooks spread fear and terror when they spread made-up rumors, the village idiots beat up and rape the actors when the general panic strips them from supervision, and even the more conscientious local residents are obstructed by their glaring gaucheness. Besides a mysterious aerial observer who gazes at the happening on the ground without interfering, there are no positive indicators that anything menacing is actually happening: it’s heads that house the danger.

The film’s strength lies in its observant recreation of pastoral life, a staggering achievement given the difficult circumstances under which it was shot (due to its subject matter, the project had to be finished quickly as a tightening of film censorship was widely anticipated after the summer of 1968). Colorful crowds and vivid characters like the wed couple from the ensemble – which wavers between flaring passion and excruciating usualness – are quick to entice us with the help of that intangible magic of observational cinema. Jan Kačer, arguably better than in Prodigal Son (where he plays the aimless but likeable good-for-nothing protagonist who is so typical for 1960s politico-existential films), is exceptional in his role of the local teacher, an awkward man enchanted by unrealistic theories and a crumbling moral (a typical feature of Schorm’s universe, where pedagogues and doctors often outmatch their wards in ignorance and insanity). But it’s not just the teacher who must face his steady decay: wanting to board the train which is supposedly about to leave “for safety” in the end of the film, all rules of good behavior are left behind as the battle for the seats begins, which, rather expectedly, culminates in further chaos and destruction. An altercation between the teacher and the train station supervisor, who appears out of the blue during the final orgy, is a desperate attempt to set the record straight minutes before the final title screen: stuck in non-informative referential clauses (“You knew about it all along”), the conversation merely confirms the engendered confusion.

Experts in Czechoslovak history will find much room for 1968-oriented conjecture in Schorm’s movie. Is the disappearance of the train station supervisor an allusion to the seizure of Dubček & Co. by Soviet authorities? Do the immobile train cars represent the public maneuvers undertaken by Warsaw pact troops weeks before the coercive occupation? Determining the depth of Schorm’s political allegory is impossible, a task further obviated by the biting contrast between reality and representation. The precipitate measures taken by the villagers in the film are unjustified and unproductive, a characterization that misrepresents the famously shrewd collective struggle against the Soviet invasion in 1968 – here, improvised barricades, homegrown radio stations and missing street signs actively hampered the advance of the unwanted troops. Of course, any viewer familiar with Schorm’s work knows exactly where the director stands on the Prague Spring, but it’s hardly this film that guides our certainty on the matter. Even on a generous reading, Seventh Day, Eighth Night does little beyond censuring paranoia, misplaced fractiousness and corruptness. The problem is not that paranoia, misplaced fractiousness or corruptness are laudable – it’s that they don’t apply to the victims of the Prague Spring in any obvious way, and certainly not in a way that Schorm would want them to. The threat to Czechslovakia and the candid heroism of its citizens were anything but unreal. In fact, there’s very little that connects the disreputable rustics from Schorm’s film with the Czechoslovak citizens of the 1960s besides having to face a challenge too great to handle. Either this film is simply not intended to be about the 1968 at all, or it is, as academics and the filmmakers themselves have stated, in which case it fails to reach its referent (if you find this contradictory, see John R. Searle’s critique of Paul Grice’s theory of meaning in Speech Acts for a forceful argument on why intentions don’t automatically entail meaning, never mind its implications on Grice’s theory).

If you’re unconvinced by this line of reasoning, imagine what reactions the film would get had it been shot by your ordinary party-loyal helmer. Wouldn’t you deem it cynical of the Comrade to say that the Czechs outplayed themselves in 1968, that all their struggles were caused by nothing but paranoia? That, yet worse, they caused more harm than they did good? I am not arguing that political cinema is bad. If anything – looking at the current political situation in Eastern Europe-, it’s political cinema that I pine for most. But what I am arguing is that political cinema is not good (or really political) in virtue of claiming to be political. It’s not enough to have an anti-x director make a random film for that film to be anti-x. The film itself also needs to be anti-x, which in turn presupposes reference to x, because trivially, you can’t denounce x without referring to x in one way or another (plug in “Prague Spring” for “x” to verify). In Schorm’s film, neither the nature of the event (political catastrophe vs. minor aberrations) nor the reaction of the agents (constructive resistance vs. nonconstructive clowning) show any resemblance between the actual event and its allegorical representation. As a logical consequence, you can infer no argument from the film that, let alone why 1968 is bad – a typical example of failure in reference. Check your text books.

It is often said that censorship – in spite of its political, social and ultimately economical harm – can spur artists on breaking free from the limits of regular artistic representation through insinuation, metaphor and fantasy. Such were the virtues of dozens of directors from the Soviet Union, Poland, and Czechoslovakia before the fall of the iron curtain, and such was the virtue of Evald Schorm in most, perhaps all of his films besides Seventh Day, Eighth Night. But it’s this one piece, politically his most daring one, that censorship has actively hampered the advance of his unwanted message. Perhaps, certain things cannot be spoken of surreptitiously, and if so, making a purely insinuative film about the Prague Spring in 1968 is certainly one of them. The censors took it away all the same, proving once more (Squandered Sunday is another example) that their understanding of cinema was as poor as their moral record. With Seventh Day, Eighth Night, they missed their ultimate chance for re-interpretation, for turning the public enemy into an accomplice in rebuking resistance. Indeed, luckily so. 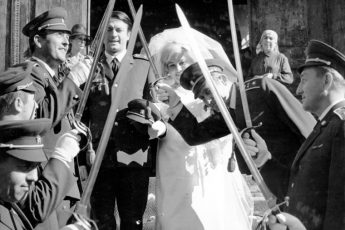