The Immortality of Lies 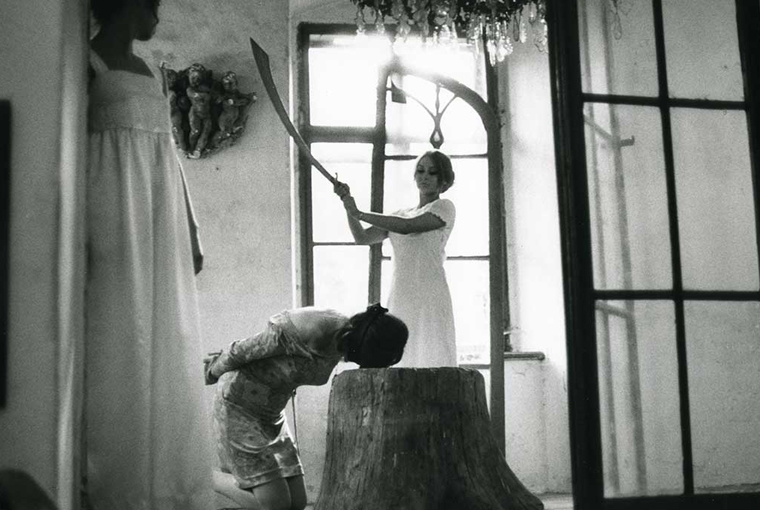 A man runs through the forest, hiding behind trees as if being chased. Dressed in a suit, his formal attire divorces him from the wooded nature in which he lurks. Within seconds of this opening sequence of Alain Robbe-Grillet’s The Man Who Lies, the intimation of escape morphs into a frantic scene of battle when an armed troop suddenly appears and fires at the man. The shaky cinematography follows the man as he flees from the mob’s onslaught, decentering a grounding perspective to foreshadow the film’s surrealist-like disorientation of space and time. The troops shoot him down to end their manhunt, yet moments later he wakes up, emerging from death alive and uninjured with the following announcement: “I am going to tell you my story. Or at least, I am going to try.”

Alain Robbe-Grillet’s The Man Who Lies examines the authentic possibility of recounting a story—and by extension, a history—and the ethical ambivalences that underlie the act of narration. The black-and-white film centers on Boris Varissa (played by Jean-Louis Trintignant), the man who enigmatically survives the opening battle scene and arrives in an unnamed Eastern European village that borders the forest. Boris tells of Jean Robin—“my friend, my comrade in arms”—the village hero of the Resistance movement who disappeared during “the War.” As the film progresses, Boris refers to himself as both “Boris” and “Jean,” and additionally disavows his identity as either of the two. This dislodging of personhood confuses the location of identity at the level of character. The possibility of distinguishing Boris from Jean is rendered futile, and it becomes further unclear—be it past or present, dead or alive—if either has ever even existed.

The opening presence of combat and Boris’ recounting of past wartime memories together suspend the oppositions that Alain Robbe-Grillet seeks to unsettle—between life and death, past and present, memory and history, truth and lies. Like Alain Resnais’ Hiroshima, Mon Amour (1959), with its refrain of “You saw nothing in Hiroshima” (“Tu n’as rien vu à Hiroshima”), The Man Who Lies similarly thematizes the impediments towards seeing, saying, and thus ethically accounting for histories of war and their resonant aftermath. The past and present of conflict mark the protagonist and the life of the village, and moreover signal the transformations from WWII into Cold War world order. The division of the world into Western and Eastern Blocs is signaled by a schizophrenic doubling of names, between the Western “Jean” and the Slavic “Boris.”

A French-Czechoslovak co-production released in 1968, The Man Who Lies subtly encodes its concurrent geopolitical reality. Robbe-Grillet directed the film in eastern Czechoslovakia in the months both before and during the Prague Spring of 1968. The attempted democratization of the Czechoslovak Socialist Republic under Alexander Dubček resulted in the Warsaw Pact invasion of August 1968. The violent reassertion of Soviet sovereignty ended the self-determination of Czechoslovak reforms a month after the film’s screening in the competition of the 18th Berlin International Film Festival.

The historical backdrop of the Prague Spring is glimpsed in the militarized apparatus that encroaches the limits of the visible and conditions the fragmented interpersonal relationships in The Man Who Lies. “Barricades,” “barbed wire,” “lists of suspects,” and “fake papers” are all mentioned in Boris’ dialogue yet remain visually absent in the film’s dizzying narrative. Nonetheless, the relative invisibility of an external military architecture is belied by the panoptic system of surveillance implicated in quotidian moments of gazing and spying that permeate the village. Moreover, Boris and Jean are both praised as heroes and denounced as traitors. Referencing Jorge Luis Borges’ short story “Theme of the Traitor and the Hero” (“Tema del traidor y del héroe”, 1944), in which the hero and the traitor are the same character, Alain Robbe-Grillet collapses “hero” and “traitor” into a synonymous category and two sides of the same protagonist. These slippery, anonymous power differentials call into question the ethical boundaries of truth and lies, friend and enemy, perpetrator and victim. The equivocation of hero and traitor thus microcosmically gestures towards the paranoid recrudescence of violent discipline that transformed the circulation of secret plans into the surge of Eastern Bloc tanks through the streets of Prague.

As in Resnais’ Last Year at Marienbad (L’Année dernière à Marienbad), whose screenplay was written by Alain Robbe-Grillet, fractured erotic relations stand in for contradictory perceptions and undercurrents of conflict in The Man Who Lies. Yet the sexual confusion in the film is closer to the model of Hiroshima, Mon Amour, whose central relationship allegorizes the unwitnessable and irreparable aftermath of postwar violence across the geopolitical oppositions (Japan vs. “the West”) that mark the protagonists’ intimate relation. In The Man Who Lies, scenes are largely divided by gender, and moments of female homoeroticism are doubled by virile performances of masculine homosociality. When Boris interacts with the women in the village, his eroticized encounters are often curt and aggressive. The portrayal of brutality and dysfunction at the center of sexual life functions to allegorize the vehement hostility and groundlessness of social responsibility as historical conditions that made imaginable the reactionary suppressions of 1968.

“I am already dead. I died a long time ago. In the war,” Boris announces towards the end of The Man Who Lies. As the film arrives at its vertiginous ending, it remains ever unclear if Boris and Jean are still alive, are already dead, are reincarnated as one another, or if they are merely lies. The Man Who Lies thus poses its partly ironic title as an ethical question regarding the force of lies when the coordinates of truth have been steadily depleted. The disorienting inversions of identity signify the impossibility of identifying the threat of violence that is repeatedly enacted under the historical guise of a return to order. The undead phantoms of “Boris” and “Jean” are figured by the protagonist who survives repeated deaths in the span of the film, thus personifying the immortality of lies as they enter into circulation. Fifty years after the events of 1968 and Alain Robbe-Grillet’s simultaneously hermetic and politically urgent film, histories of deception continue to foreclose the narration of truth. The Man Who Lies ends where it began: before running off into the woods, the protagonist announces his lie anew, “Now I’m going to tell you my real story. Or at least I’m going to try.”