Riding on the Rails of History 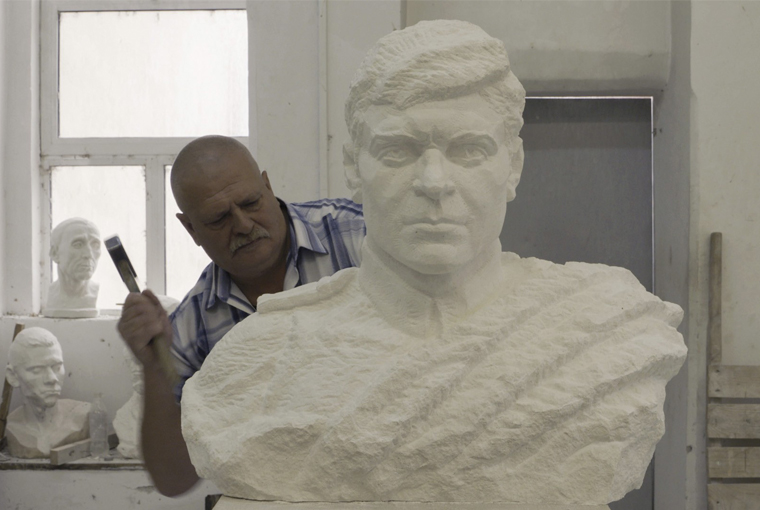 The most powerful image in the collaborative documentary Occupation 1968 on the Prague Spring is of a Janus-faced marble plate. On one side, the plate commemorates the “heroic death” of a young student stationed in Czechoslovakia during the 1968 invasion of Czechoslovakia, while the writing on the other side names only the nondescript death of a young soldier during stationing. With the post-89 revolution, a young man’s brutal murder at the hands of “counter-revolutionaries” turned into an unspecified death in the line of duty. That this shift in interpretation can be demonstrated with the turning of a single stone rectangle exemplifies not only the malleability of our belief systems. The simplicity of the movement also raises the question whether we should treat either side of the story at face value. Is it plausible to assume that the truths about our past can be condensed into plates of stone?

This kind of question lingers over each of the five segments that make up Occupation 1968, although only the one with the marble plate centers around a death. Occupation 1968 revisits the Prague Spring in dialog with soldiers who participated in the 1968 invasion of Czechoslovakia by Warsaw Pact soldiers, most of whom were under no physical threat while facing unarmed civilians. There are segments on (and with) soldiers from each of the four Warsaw Pact armies that invaded Czechoslovakia – the Soviet Union, Bulgaria, Poland, and Hungary -, and one featuring two soldiers from the GDR, which deployed troops to the border with Czechoslovakia but did not ultimately participate in the invasion due to feared analogies with the Nazi invasion of 1938.

As any collaborative feature – whether fictional or not -, this documentary, too, struggles with stylistic eclecticism. From a sort of travel log with three Soviet army members who travel to Czechoslovakia to revisit some of the historic sites they had entered 50 years ago, we proceed to a stylized reconstruction of the deployment of a Hungarian unit which is staged at the historical setting with its original members. The readjustments only become more exacting as we next turn to a Polish couple whose post-marital separation during the Prague Spring is juxtaposed with the contemporaneous Sopot music festival and secret service footage; then to the GDR soldiers who recount how they tried to hide their dissatisfaction with the system with varying degrees of success in a lyrical (but sluggish) segment featuring a piano in the woods; and finally to the case of Nikolay Nikolov, the soldier from the marble plate, whose mysterious fate is again addressed in the detached and observational style the film set out with. Whatever the width of your taste and preferences, it is unlikely that you will – in one single sitting – be able to revel in the pretentious camera pans around the forest with the same joy with which you might indulge in the Andersonian camp atmosphere that is skillfully conjured by the former Hungarian conscripts.

Of course, this stylistic multiplicity lies in the nature of collaborative features and may very well be the sort of aesthetic polyphony the makers of Occupation 1968 were aiming at. Think of the Cities of Love franchise that started with Paris, I Love You in 2006 (never mind its blandness) and is scheduled to include many more cities. Isn’t it the point of such projects to pay tribute to the many faces of a city? And if cities, certainly metropolises such as Paris or New York, have many different faces, what indeed could be said against considering historical events such as the Prague Spring as equally multi-faceted and thus of deserving varying aesthetic approaches? The irony is that in spite of its stylistic eclecticism, Occupation 1968 does not pay tribute to the complexity of the Prague Spring. Though the film is shot in many different styles, the individual segments don’t recount truly rivaling accounts of that event. Rather, different people tell mostly the same story in different ways: what distinguishes the accounts is first and foremost the genre of their presentation. This may be adequate as far as a city is concerned, which is neither a good thing nor a bad thing, but for the assessment of historical events that have ethical and ideological judgments attached to them, this sort of limited perspective is highly constrictive. Most problematically, the film risks both exaggerating and idealizing opposition to the system in former Eastern Bloc countries by letting its subjects recount history from today’s perspective without any attempts at contextualization. This suggests that citizens from behind the iron curtain were generally opposed to events such as the Prague Spring, and that they were further thus opposed to it for all the right reasons.

The closest the film gets to addressing genuine controversy comes twenty minutes into the film, when the Soviet three-person delegation is greeted on the Prague airport by 90-year old former airport employee Karel. Only minutes after they have introduced themselves to each other, Karel announces that he wants to tell them something “they will not like”, which is that he strongly opposed the 1968 occupation of Czechoslovakia by Warsaw Pact troops, and that this is something he will never be able to forget. Though the viewer cringes at the atmosphere this creates, Karel’s exclamation does not provoke a discussion. Karel tells his side of the story, and what else can Ilya, Masha and Yuriy do but listen? In the film’s epilogue, segment director Evdokia Moskvina has Yuriy retell the invasion to his grandchild as the struggle against counter-revolutionaries the authorities once depicted it as, but the truth is that that scene, apart from seeming staged and unnatural, exaggerates the conflict potential of the Prague airport meeting with Karel. In the film’s opening segment, Ilya and another military had already voiced their disillusionment with the purpose of their 1968 mission. Though Yuriy and Masha do not go as far as questioning their former orders, they, too, express sympathy with the Czechoslovak cause and show no interest in defending the Soviet narrative of the event.

As the film progresses, such voices of pity only become more vocal, so that it almost feels as if the filmmakers had to return to Yuriy in the epilogue to remind their viewers that there were in fact people who used to believe in the purpose of the invasion, and that some such opinions circulate even today. After interviewing a whole number of soldiers who regret having had to participate in the Prague invasion, the film suddenly ends with a pessimistic note warning us that the ghosts of the past have not yet been dispelled. Which raises the question why the filmmakers have, for a good part of the movie, not bothered to give voice to the other side, instead inviting us to believe that the Warsaw Pact soldiers were as skeptical of the 1968 invasions as were the citizens of Czechoslovakia. The only proof of a survival of the spirit of righteous occupiers (if you do not count the implausible epilogue) comes in the segment on Nikolay Nikolov. In addition to the already mentioned marble plate, his death is commemorated in his village with a bronze statue. When the statue is stolen, a replacement is unveiled at a pathetic ceremony, where the language of the Communist propagandists sounds once more, as the presenter speaks of Nikolov’s internationalist heroism in the face of the enemy. Still, it is unlikely that the ceremony would even be held were it not for the victim’s family. Either way, a few dozen guests hardly seem like definite proof of a looming threat.

The film’s focus on the right side of history may seem particularly problematic with the GDR and the Soviet Union, where opposition to the invasion was likely lower among conscripts than it might have been in Hungary or Poland. But if we step back for a second and deliberate the reasons why it would have been easy for Magdalena Szymków, the director of the film’s Polish segment, to find a Polish soldier who opposed the invasion of Czechoslovakia, the wider political context comes into view, and with it the limited horizon of Occupation 1968. It is not just that history was rewritten in more fundamental ways in Poland than in say Russia and many other Soviet republics (of which there were as much as 15 in total, one should add). It is even more fundamental for understanding Polish and Hungarian soldiers’ readiness to call into question their orders, and by extension, local dissidence more generally, that Communism was, in the sense confirmed by the 1968 invasion, perceived by them and their compatriots as a national question. The thing that Communist propagandists were not able to do in countries with strong national identities such as Poland or the Baltic states was to reconcile the public with the systems they imposed. While ordinary Russians may have been just as unhappy with economic problems or censorship in the Soviet Union, to Poles and the citizens of the Baltic states the most fundamental issue was constitutive of the system: they did not perceive it as theirs. Thus, though Poles, unlike the Baltic states, remained nominally independent after WWII, the state they lived in was one they could not identify with.

This is important because it suggests that the makers of Occupation 1968 have, to a considerable degree, misidentified the ghosts that haunt Europe today. The sense of alarm they try to conjure by having Yuriy reiterate the language of Communism makes one wonder whether people’s relationship to the Prague Spring is really the best way to diagnose our woes in Europe today? Hungarians and Poles are more than willing to reevaluate the 1968 invasion of Prague, and yet their governments are contributing to one of the EU’s biggest crises since its inception. Did the filmmakers forget that Jarosław Kaczyński and Viktor Orbán were among their countries’ most vocal dissidents? That even the former GDR is caught up in a frontal confrontation with extreme right forces? None of this is to say that our relationship to our Communist past does not matter. But to interview soldiers from the different former Warsaw pact countries without even acknowledging their different histories, the distinct economical situations they now find themselves in (which makes it easier to pine for the Communist past in Russia than in the Czech Republic), or the national discourse that reigns in each of these countries, is negligent if not naïve. We can agree that the young soldier from the marble plate did not die at the hands of counter-revolutionaries, but what will that agreement amount to?

The issue with marble plates is not that they constantly change their meanings. It is not the case that with each government, we will have to put up a new plate and rebuild the truth from scratch. This is merely what relativists have us believe. The misleading thing about marble plates is rather that the truth is more complex than a sign can capture, and that signs too are dependent upon interpretation. We may agree on the meaning of the words on a sign, but the evidence this sign constitutes can still be conceived of in infinite ways. The fact that Communist propagandists in the past and nationalist agitators today actively falsify the truth does not mean that it is something that is easily arrived at. Ironically, one of the (many) dangers of prevalent denial strategies is that those who do recognize the evidence of facts may be led to believe that they possess it in a pure and unadulterated fashion; the fact that the other side constantly lies, may lead us into thinking that we know all the facts by speaking truthfully. That this is not the case can be realized by acknowledging that it is much easier not to lie than to speak truthfully. 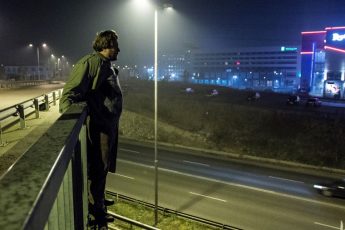