The Death and the Maiden 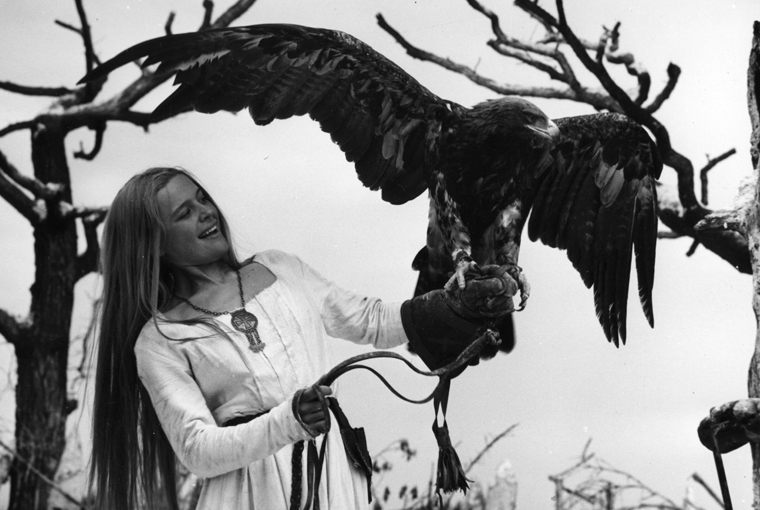 In both versions of Rembrandt’s “Slayed Ox”, a woman can be discovered in the background of the painting, one is poking her head out of a door frame, and the other is scrubbing the floor. A similar image – of a slaughtered animal with a maiden – can be found in a sequence of František Vláčil’s Marketa Lazarová, where a women is chopping between the spread legs of a strung-up pig. In Rembrandt’s paintings, the dark stable in which the meat is hung, and above all the towering exposure of the dead animal, might not let the viewer apprehend the women at all. They seem to be hidden from death, as if unafflicted by the anatomic reality of the butchered animal. But once discovered, the tranquility of these women seems to contradict with the violence of the image and their presence drastically reduces the shocking effect that comes from the cadavers. Probably the women themselves have prepared the animals, and the woman on the floor is about to wash away the mess of her own operation, while the other one has come back to take a look at her oeuvre, or to smell if its flesh has at last turned into meat. The calmness of the woman in Vláčil’s film also seems to tell us that this is, after all, an every-day scenery. 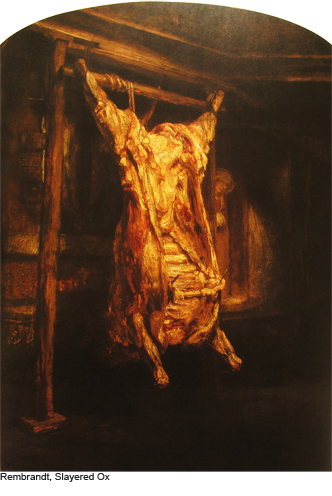 While slaughterhouses and depictions of dead animals are often associated with organized human violence or even war (juxtapositions of animal slaughter and combat appear in the last scene of Eisenstein’s Strike; one might also recall Kracauer’s interpretation of Georges Franju’s Le sang de bêtes), it is striking that in both Rembrandt and Vláčil, the destructive image of the carcass is not linked to human cruelty, but to a more solemn account of this bloody event. The slaughter in Vláčil’s film even results into a love scene, when a warrior wants to give part of his loot to the woman occupied with the pig. Instead of using the image of the slaughtered animal as a symbol for the catastrophic appetites of mankind, both Rembrandt’s paintings and Vláčil’s scene can be linked to the theme of the death and the maiden, in which the simultaneous presence of women and death is not portrayed through shock, but through fascination.

The death and the maiden theme however, has often been combined with eroticism, either in an attempt to eroticize death (Dorfman, Polanski) or, on the contrary, to put eroticism to death (Hans Baldung). From this points of view, figurations of death in the presence of women only recall the imaginary embodiment of a moral constraint, and the woman’s desire for such figurations seems to result more out of a desire to challenge those morals than out of genuine attraction. Instead of thinking the cadaver as a moralization of desire through the display of frightful imagery, it appears to be more useful to understand it as a mental production coming from the women themselves. In Rembrandt and Vláčil, the woman are the ones who have arranged the rendezvous with death; they are not being overrun by a Don Juan disguised in a deadly costume.

If then, the death and the maiden theme is not a metaphor for a liminal experience, but the manifestation of an interior one, why would that experience result into a vision of violent images? Where do they come from?

Psychoanalytical theory links visions of intestinal mess and the like to early childhood subject formation. Lacanians, for example, believe that when a child becomes aware of itself, it is a “body in pieces.” At some point in its development, the child will recognize itself as an independent entity, separate from the maternal unity or whatever unity the child experienced prior to this self-awareness. But two major incidents conflict with the child seeing itself as an entirely distinct body. While the child starts to idealize its experience of separation, it creates an image of its body that does not coincide with its present existence: the self-sufficient ideal (imago) contradicts with the experiences it undergoes, because the child is confronted with the fact that most of what its body does is still beyond its control (internal alterity). On the other hand, now that the child begins to become aware of its separation, it will be confronted with the ideals, and anticipations that the people in its environment project unto itself and thus experiences yet another image it fails to satisfy (external alterity). The child’s self-awareness is thus accompanied by imaginative failure. The “body in pieces” is the experience of this failure, it expresses the child’s confusion over its own somatic topography.

If we are not haunted at all times by these images, it is because we experience sufficient objects in life that give us the feeling that we can identify with the ideal images we have created ourselves, and that those ideals are unified. But images of the “body in pieces” might return into our lives, whenever we relive an experience of profound separation. One might be amazed by the images that appear when separating from a loved person. Here the drama of the child’s formation is able to repeat itself, and frustration over unaccomplished ideals, the dream of total unity, turns into images of violence and destruction. The theme of the death and the maiden, if death is the mental production of the maiden, can thus be seen as the depiction of erotic desire, but only from a perspective of this resurgent imaginary failure. In that sense, death does not introduce the maid to love-life, but returns in various intensities, as a mental reaction towards anticipated images that could not keep up with conflicting observations made in real life. Essentially then, the death and the maiden theme is about identity frustration.

This explanation of the death and the maiden theme makes sense of the interior genesis of violent images. But if the cadaver is a production of the maid’s psychic condition, it remains unclear that neither the women in Rembrandt’s painting, nor the woman in the sequence of Marketa Lazarová, seem to suffer from anxiety, desperation, existential pain, in short: they do not seem the least “separated” from an imagined unity. Above all, they are busy. They work, cleaning, scrubbing, chopping.

We are thus again confronted with the fact that the women in Rembrandt’s and Vláčil’s depictions are contrasting with the carcasses. Work and especially cleaning, seem to contradict with the the chaotic mess of the dead corpse. Instead of identifying with the disorderly image of death, the women are committed to the organized life of work. If the nonsensical nature of the piece of flesh is the reason for a rational activity, it would seem contradictory to assume that it would manifest, at the same time, the disoriented state of the women’s identity. In other words, if these women are not even aware of the “body in pieces” – the recognition of their own discontinuity – how can we assume that they are experiencing some kind of identity frustration?

Or is it not precisely because their work has death as an object, that the women are not afraid of it, that they themselves do not embody the aggressiveness of the image, even though it the result of their own production? In Vláčil’s sequence, aggressiveness comes from everybody else but from the women. Next to the the slaughter, we can see a man frantically whipping a horse, there is a prisoner who will soon be executed, and a child torturing the prisoner. Ironically, only the woman slaying the pig faults the child for his aggressiveness. Vláčil twice exposes the peaceful impression the woman slaughtering the pig leaves behind, first by attracting the love of the warrior, and then by calming the child. For the woman then, the need to work with the carcass – “the body in pieces” –, paradoxically has a soothing, if not therapeutic effect.

“The body in pieces” can turn into a cathartic object that is able to make sensible the profound feelings of separation that we have experienced as children, and that we are reminded of through similar experiences in later life. The anxiety of knowing about our own separation from the world, and of not experiencing sufficient amount of narcissist feedback that could affirm us of our oneness with the world, can lead to desperation and aggressiveness – scenes similar to those that happen around the slaughter in Vláčil’s film. But the carcass is able to assume this lost oneness, because its death disrupts its separation from other separated beings. What remains, what the women in Rembrandt’s painting have hung-up like a sacred idol, is the reestablished oneness of all existence with which the animal is now one. Through the spectacular presentation of the carcass, the women in the canvass and the film can thus re-experience this primary unity, where there was no name, no body, no order, no memory, but only the manifestation of profound chaos.

The representation of “the body in pieces” thus has a dramatic function. Of course Rembrandt’s depiction is not alien to rural life, and there is definitely an apathetic side to the painting. But after all, we are invited to look at this carcass from a point of view more recalling the depictions of Crucifixions – the spotlight and the cross-like positioning of the carcass seem to suggest a more sacred event. This might be why the women do not reveal the horror that would keep us away from looking at death. On the contrary, their silence hints at a solemn fascination for death, helping them to get along with the awareness of their own mortality and their separation from the world. They work for the sacred dramatization of this terrifying scene.