The Martians from Underwater 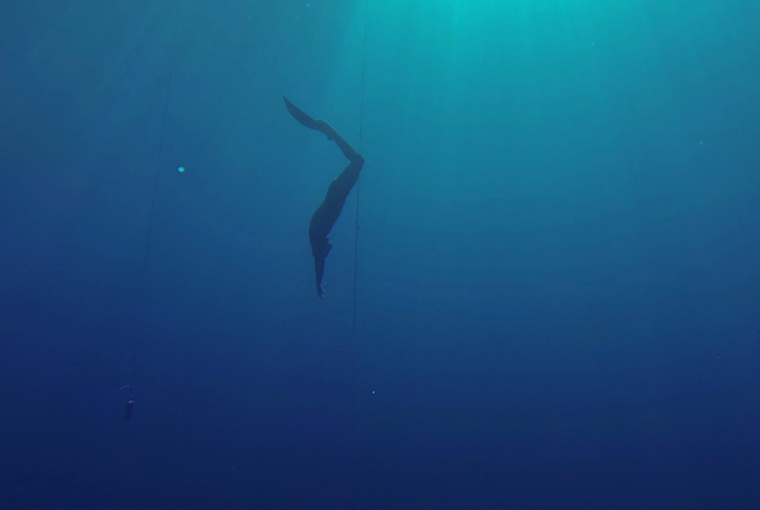 The life of a professional free diver – an athlete who employs body-enhancing methods and an intense training routine to stay under water without breathing for unlikely periods of time – could either be the least, or the most, worthwhile sort of cinematic substance. It has the potential to be the latter not just along the overly familiar lines of Hollywood’s grand narratives, but likewise because the underwater world has remained relatively foreign to our visual consciousness. In spite of subsequent generations of waterproof technological gadgets (first cameras, then mobile phones), we are far away from having articulated a generic vocabulary for the aquatic world – the perfect challenge for an adventurous director interested in pushing the limits of our world view, it seems. Unfortunately, none of such pioneering moves are dared in Bojana Burnać’s My Life Without Air, a stale look at the career of Croatian free-diver Goran Čolak which resorts to the familiar filming-equals-storytelling trope of arthouse cinema.

The frightening thing about Burnać’s film is that it readily embraces its premise. From minute one, we follow Čolak through routines which seem even more vapid from the outside than they must already feel subjectively. We watch him prepare his meals, practice, sleep, practice, go through medical tests, and practice some more. Of course, this is the price you pay for wanting to be an athlete. The question is why the viewer should share that burden. Surely, there is something fascinating about people being able to push themselves to such extremes that they can stay underwater for twenty minutes without breathing; more than once, we witness athletes young and old cough up water after routine blackouts. And it is no less fascinating that Čolak does not seem to be drawn to the sport because it specifically interests him, but rather because it just happens to be the sport which allows him to be the very best in the world. In a rare voice-over, he claims this to be the main asset of free diving – that it allows him to feel important, that it has people look up to him. From a philosophical standpoint, this raises all sorts of interesting questions about why humans like to compete: are we humanistic perfectionists, or brute animals unable to escape our primordial needs and desires? For the film, however, Čolak’s confession proves fatal, as the viewer’s already strained patience is burdened further by the suspicion that the film’s subject matter is nothing but a narcissistic charade.

To dispel such worries, Burnać could have tried to emancipate Čolak’s praxis from his personal motivations, which is something we do on a daily basis. For instance, we don’t care why someone became a piano player when we’re at a concert, but prefer to concentrate on how they play (only the very bitter among us will keep being distracted by an artist’s personal idiosyncrasies). Instead, the director has us travel to countless free-diving competitions that are so hard to grasp that even the camera seems more interested in the congregation of referees at the water’s edge. The water is only entered for much-anticipated but ultimately static underwater shots, and during the frighteningly frequent blackouts. The most interesting moments may thus be the ones before competitions, when Čolak – generally a rather timid type – coils up his large body, initiating fantastically elaborate breathing patterns. Needless to say, such moments do not exactly break the film’s soporific gait, but fit nicely with the training-eating-sleeping cycle.

Curiously, the film does not even elaborate on what it means to be a professional athlete beyond wanting to be the best in the world, which cannot possibly be what goes on in Čolak’s mind every time he enters the water. The issue Burnać does not address, although ironically, her film makes it more than transparent, is that intersubjective explanations which pretend to communicate why we do the things we love are really only rationalizations. This is what makes it so difficult to transport the fascination of a sport cinematically – especially if the viewer has no prior bond with it. Not only are the reasons that led Čolak and Burnać (a free-diver herself) to the sport unavailable to the rest of us, as there is nothing inherently appealing about the idea of being submerged under water with no air to breathe. Even if Burnać were to hint at what draws free-divers to their sport, as she occasionally does, that would not even begin to touch their bond with their sport precisely because it is not reducible to a definite list of reasons. It is one thing to say that one likes say free-diving’s physical demands, but another to practice it day in, day out until the question of “why” recedes from one’s mind. What the film fails to deliver is a path towards that state – a way of becoming complicit with the athletes and of beginning to relate to their yearning for its aesthetic and athletic virtues. (We can, based on the discipline and dedication we witness, come to respect free-divers, but for that we don’t need films, but a moral capacity – decency.)

Because Burnać fails to communicate that deep, almost biological communion of athletes with their sport, her film brings to mind the old, mythological link between the underwater world and outer space. For without being shown human moments we could begin to relate to, the free-divers seem like martians who have descended upon earth together with their incomprehensible life forms. As it stands, free-diving seems similar enough to our ways to exact our respect, but also dissimilar enough to reach beyond our grasp.