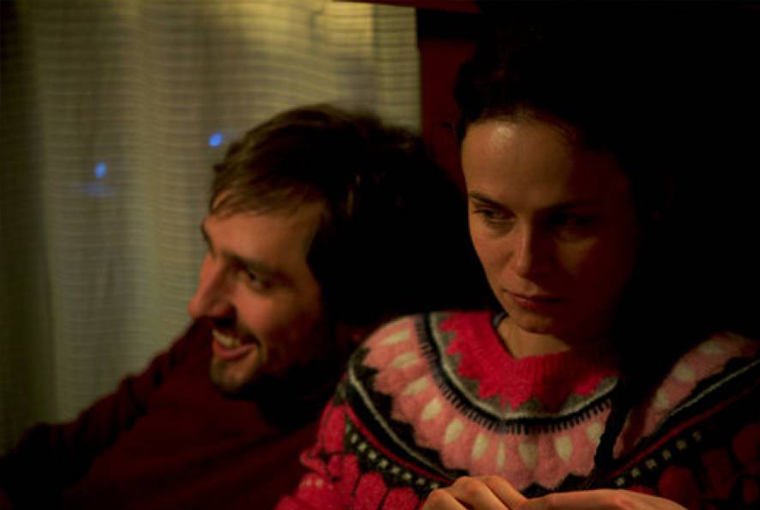 Relationships follow a logic of their own. Subjective and mutable, subtle and intangible, they are best interpreted like dreams, or at least that is the hypothesis presented by Călin Peter Netzer in Ana, Mon Amour (2017), an epic hyper-real deconstruction of a love story in all its contradictory facets. Regardless of whether this idea holds water as a universal truth, the film certainly makes a convincing case for adopting this approach for depicting romance cinematically.

Perhaps slightly over-emphasizing the theme of Freudianism, the love affair in question is recounted by Toma (Mircea Postelnicu) to his psychiatrist (the ubiquitous Adrian Titieni) in fragments arranged associatively rather than chronologically. The beginning roughly corresponds to the early days of the affair, when Toma and the eponymous Ana (Diana Cavallioti) first met as comparatively carefree students. Likewise, the end generally sticks to the vicissitudes of late-marriage, but the precise order of everything in between is open to debate. The film wisely rejects hackneyed methods for marking the passage of time, such as painstakingly trying to recreate the aesthetics of an era or plying the actors with unconvincing make-up. Entertainingly, the primary means for keeping track of a rough timeline available to the audience is Toma’s receding hairline.

This attitude towards the representation of time is consistent with the film’s overall presentation of Toma’s memory of the relationship as a whole. It is patently biased and selective, alternating between nostalgia and bitterness depending on the point he is trying to prove during therapy. Moreover, it is eventually revealed that part of what is being shown is actually from his dreams, suddenly calling the veracity of all of the scenes into question. Essentially, nothing can be taken at face value, but everything has its own subjective truth. This structure also has the added benefit of not spoon-feeding audiences, keeping them engaged as they try to piece together all the different elements which should come together to form a coherent whole but ultimately and poignantly refuse to.

Given the nature of the frame device, Ana is unable to present any counter-perspective or self-defense. At first this appears quite problematic, given the persistence of stories told through the eyes of others. In this case it is especially sensitive, as she is presented as highly vulnerable, with numerous mental health problems and a dependency on the medication prescribed for them. However, to the great credit of the film, this first set-up is totally undermined as the narrative unfurls and Toma’s flaws and culpabilities become gradually more apparent. In the early days of their relationship, marked by a palpable sexual attraction and fun flirtation, Ana’s issues seem to add to her “pixie-girl” allure. Next come the complications introduced by the couple’s respective families and the dramas that accompany them. Toma chooses to simplistically ascribe blame for Ana’s psychoses to her parents, as she first broke down when she discovered that her biological father is not the man she grew up with, who may or may not have abused her on top of everything else. Meanwhile Toma’s bourgeois parents are openly hostile to Ana, whom they view as damaged beyond redemption and an inevitable drain on their son’s finances and emotions. At this point, Toma comes across as noble and selfless, while Ana is infuriatingly and self-indulgently helpless, but this entire dynamic is problematized over the course of the film, with Toma’s actions beginning to appear controlling and damaging. It is in this depiction of the complex mess of intentions vs. outcomes that the film excels, and in its representation of the impossible desire to construct a clean, satisfying narrative where blame is ascribed unambiguously.

Beyond Netzer’s profound portrayal of the ineffable and unknowable nature of romantic love, he also carefully interweaves a number of background themes that work on several levels. Some of them, such as the theme of emigration/national abandonment, speak particularly to a Romanian and regional context, while others add to the universality of the couple’s entanglement, and accurately reflect the wider societal implications of coupling up. The emphasis on the problematic parental dynamics obviously ties in very neatly with the psychoanalytical strands and the lurking shadow of Freud. However, this aspect also manages to go beyond the shallow construction of filmic tropes, delving into the difficulty of negotiating with the legacy of previous generations. Toma and Ana clearly want to reject the model of relationships set by their parents, but inevitably find themselves falling into the same patterns. One of the issues underpinning many of the anecdotal scenes is the necessity of grappling with previously-existing societal norms, and the uncomfortable realization that being aware of the flaws of the past does not necessarily equate to having a satisfying solution for the present. This is also expressed through the tension between religion and psychiatry as an effective means of guidance, with the couple dabbling in both and finding both to fall short of their requirements.

Given its intangible nature and vast breadth, the film could also be seen as something of a filmic Rorschach test, allowing viewers to hone in on the parts that most resonate with their own experiences. Going way beyond the boundaries of a love story, the questions posed in Ana, Mon Amour go to the very root of society and all human relationships, revealing uncomfortable truths and taboos with a brutal poetry rarely seen since Cassavetes.