The Bureaucracy of Suicide 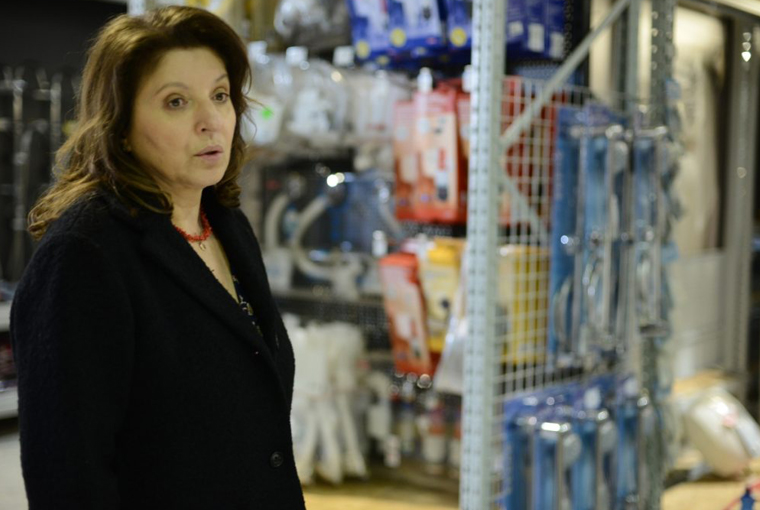 Jelena (Mirjana Karanović), or Mrs. J., has nothing left to live for. After almost exactly a year of widowhood and unemployment, Jelena’s feisty daughter Ana (Jovana Gavrilović) has taken over as the family breadwinner, a situation that suits nobody. Meanwhile her gloriously foulmouthed teenage daughter Kovilkja (Danica Nedeljković) keeps getting into fights at school. Briefly forcing herself out of her normal state of stultification, Jelena hires the local stonemason to add her name alongside her husband’s on their shared gravestone, with the date 2016. Now all that remains is to figure out the logistics of her suicide, but it proves trickier than anticipated. She already has a gun, but the dodgy acquaintance she turns to for a bullet refuses to oblige on the grounds that it will be too traumatizing for her children. As an alternative, he assures her that her doctor will be happy to provide her with all the barbiturates she needs, kick-starting a series of absurd bureaucratic encounters as Jelena drags herself from dilapidated institution to dilapidated institution in a futile attempt to get her medical card approved.

Narrowly avoiding classification as ruin porn, the film manages to underpin its obvious social critique with carefully balanced dark humor. This is especially effective in terms of the nuanced characterizations achieved through a combination of excellent scriptwriting and acting. Despite being infuriatingly dysfunctional and almost mute, the titular Jelena nevertheless manages to remain likeable and maintain a certain level of sympathy. Just the right amount of warm-heartedness seeps through the perfectly gruff exteriors of her two surly daughters. In a satisfying gender stereotype reversal, Ana’s boyfriend Milan (Vučić Perović) is useless and meek, but a well-meaning and inevitable presence around the house. Even the bit-part roles are convincingly entertaining and well-rounded, with the grave carver taking the prize in this respect.

Largely consisting of wide shots where every inch of the frame is maximized, the composition is intricate and clever, at times to the point of distracting. This often creates a dramatic effect, such as one on the opening sequences, in which we see Jelena clutching her gun at one extreme end of the screen, while her doddering mother-in-law risks walking in on her from the other. Within the environment of the flat, this careful construction highlights the chaotic mess resulting from the would-be matriarch’s breakdown. The geometrically methodical mise-en-scene is at its most extreme in the institutional settings, from the decaying factory that made Jelena redundant after years of employment, to the unconvincingly outdated employment agency office, which apparently still uses typewriters. In between come numerous waiting rooms, filled with equally long-suffering zombies presumably on equally pointless missions. While this approach makes its point very effectively and offers a certain amount of aesthetic satisfaction, this quickly tips over into being slightly labored and irritating. The same is true of the soundscape, which hovers on the border between effectively mood establishing and faintly annoying.

The overall effect of this somewhat detracts from the film’s social commentary. The premise and characters are perfectly convincing in their portrayal of life in post-Yugoslav Serbia as mindlessly groping through a labyrinth leading nowhere. However, these excessively farcical moments cause a rupture in the otherwise delicately constructed emotional texture, diminishing sympathy and increasing disbelief. The same can be said of the questionable surreal interludes, which provide a certain amount of light relief (and arguably a Yugo-nostalgic subtext) but at the cost of the film’s precious subtle plausibility.

Similarly, director Bojan Vuletić’s representation of women is generally exemplary, in that they have a completely normal amount of psychological depth and their stories depend on their own characters and situations rather than their gender. Each member of the four generations of the family is funny, provocative, likeable and completely believable. The absence of the patriarch is felt, not because of any implied need for a male figure or any unfulfilled role, but rather because he was loved and missed. The film does fall into two clichéd traps in this regard, however. The first is the trope of the woman rediscovering her voice, as part of a trend that seems to hold the conviction that all feminism needs to succeed is for women to sing more. The second is the cinematic rule that, just as when a gun enters a scene it must necessarily be fired, when a woman vomits on screen she must necessarily be pregnant. These small niggles aside, Mrs. J sets a high standard to follow, which in an ideal world would become so normalized as to be entirely unremarkable.

It is unclear whether Jelena is intended as representative or symptomatic of present-day Belgrade. Purposeless, disenfranchised and completely incapable of helping herself or others, she nevertheless offers a promise of future reawakening or change. Time will tell whether this remains true only in her fictitious world, or whether the reality of modern Serbia will follow suit.