From Confusion to Fascination 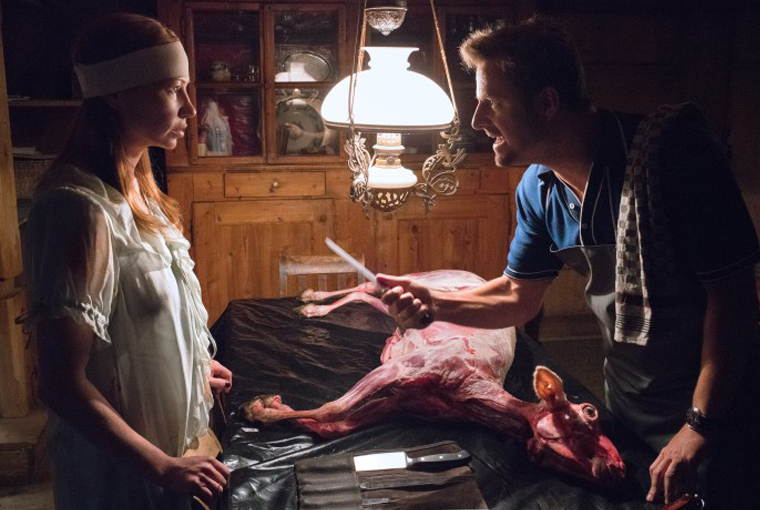 Letting you in behind the screen for one moment, early in my notes from the screening of Greg Zgliński’s latest feature film Tiere at this year’s Berlinale I wrote the following sentences: “Oh, oh, it’s a film about chance and accident. Never good.”

Now there are at least two things wrong with this initial assessment, and both of these things have some significant bearing upon how this review of Tiere is to play out. First of all, I’m clearly being absurdly dismissive in saying that all films about chance and accident aren’t any good. One of the very best Polish films of the late state Socialist period is Krzysztof Kieślowski’s Blind Chance (1981) starring Bogusław Linda. It is the first of the great director’s films to explicitly express Kieślowski’s profound interest in chance and its more authoritarian corollary fate. There is an argument to be made that from Blind Chance onwards Kieślowski’s films are interrogations of the role that chance plays within an individual’s becoming. Now I am not entirely sure that Tiere is informed by chance and accident, but rather by that aforementioned corollary fate, in masquerade. This, if anything, aligns the film’s vision with Kieślowski’s most unsettling work, No End (1985), in which a husband’s suicide is the catalyst for his widow to engage in a whole series of increasingly radical, and ultimately frustrating, confrontations with authority. Greg Zgliński may not be a filmmaker of Kieślowski’s ability, but, as was revealed during a post-screening Q&A, he is the master’s student (he studied under Kieślowski during the director’s brief tenure at the Łódź Film School in the early 1990s), and what he has delivered in Tiere is a Kieślowskian horror film.

Nick (Philipp Hochmair) is a chef and a philandering husband, married to neurotic writer Anna (Birgit Minichmayr), but having an affair with his upstairs neighbor Andrea (Mona Petri). Andrea is a depressive recluse who is going out with jealously possessive florist Harald (Michael Ostrowski). Anna is about to embark on the writing of a new book and so the couple are moving out to the countryside to a cottage retreat where Philipp can indulge his culinary curiosity and Anna can complete her work. Before they head off they rent out their property to Mischa (also played by Mona Petri), a self-assured and sexy young woman in need of a cheap place to stay. All of the film’s moving parts are established within a twenty minute opening section in which time becomes an awkwardly fluid concept. These moving parts are then brought into direct conflict through two chance occurrences, the surreptitious reading of a text message and the brutal collision with a sheep.

Much like Kieślowski’s No End, Tiere has a contorted and protracted production history. The film is based on a screenplay by the late Austrian filmmaker Jörg Kalt. Before his suicide in 2007 the writer-director had effectively gone in to pre-production on Tiere. His death put pay to that production, but the script had already spiked the interest of Zgliński, who was a friend of Kalt’s. Paring the script back to its essentials and significantly altering the ending Zgliński tried to put his own spin on Kalt’s material, finally getting the production off the ground in 2015, almost a decade after Kalt had begun work on it. In the end the film has been brought to the screen through a European co-production structure involving funding and professional talent from Austria, Poland and Switzerland (where Zgliński has been based, on and off, for decades).

Tiere is a wildly self-indulgent and elegantly messy film. The self-indulgence is partly explained through the circumstances in which the script was written and the resulting film produced. How does a filmmaker approach the work of a friend who has recently taken their own life, especially when that work seems to be infused with the heavy weight, and punctuation point, of a suicidal mindset? Time and perspective within the finished film tend toward the elliptical, with certain events (the opening suicide, the car crash, the text messaging) seeming to repeat, or being viewed from another character’s perspective, thus distorting any sense of a fluid, linear timeline. In many ways the film’s opening image of a vehicle charging through the narrow, curving passage of a red-lit car tunnel is perfect in its peculiarity, demanding interpretation and reinterpretation. In a film that is obsessed with collisions, the most reckless piece of driving goes unpunished. Who is being conveyed in this opening image, and who are they being conveyed to? Isn’t this a little like Alice and her rabbit hole? Only there is no Alice in the film, but rather the audience are Alice, pushed into a screen rupturing POV shot driving on into a very different space, one that is defined by subjective consciousness and its capacity to distort and deviate.

This helps to situate the overly flashy opening suicide of the film. It is located outside of standard time, a forecasting of the future or an echo of the past, that therefore has a estranged relationship to any conception of the present. Nick and Anna are presented as a rather extravagant yuppie couple, but whereas Nick seems to be all ingratiating surface slickness, Anna is a more mercurial character at once chillingly cold and detached, yet achingly vulnerable. It is Anna’s underlying neuroses that tap in to questions of what is and isn’t happening in the film. At the outset she is the character who seems to have the greatest sense of things never being quite as straight-forward as they seem, which gives some credence to the idea of her character’s symbolic potential as ‘the writer’. Anna is also partially aware of something awful approaching her life as she knows it. Her morose sensibilities feel out fate long before she has consciously realized it.

The opening sections of the film are filled with an unsettling and constantly growing sense of dread that manifests itself most explicitly in Anna and Nick’s nightmarish nocturnal imaginings, but is more subtly rendered in the neat mirroring and doubling of locations (the various different flats and cottages all seeming to correspond to one another), objects (knives, carcasses, books), incidents (the car accident, the suicide, injuries to Anna and Mischa) and eventually people (Andrea and Mischa). Then there are the animals (owls, cats, sheep) who all seem to possess certain ‘familiar’ qualities. The suggestion throughout the film that the ‘real’ world has been twisted into another kind of reality, most explicitly rendered in the presence of a locked door to a room that shouldn’t be entered, makes these animal figures seem like sentinel markers, caught between realities. At one point Zgliński toys with the esoteric nature of the film’s symbolism by having a cat (notably a Sphynx variety) talk in French. Yet the film’s esotericism undoubtedly comes from the particulars of Kalt’s script. During the Q&A both the director and the lead actor, Philipp Hochmair, repeatedly mentioned that they did not initially understand Kalt’s script. Hochmair even talked about using his lack of understanding as a way in to his character. It would seem that this difficulty within the source text has translated itself very effectively to the screen in terms of the overall atmosphere of the film. What better way to approach a text that is all about the insecurities of identity, than to be unsure of the text itself? Yet this failure to entirely grasp Kalt’s material does make some elements of the film seem like surface ornamentation, not aided by Zgliński’s preference for extravagant camerawork.

The Kieślowski connection can be felt further in the film with regard to Zgliński’s choice of DOP. Piotr Jaxa is a Polish veteran cameraman, who worked with Kieślowski on his early documentary films and later appeared in the director’s Three Colors Trilogy (1993-94). Jaxa’s association with Zgliński goes back to the director’s formative training at the Łódź Film School, where he was introduced to Jaxa through Kieślowski’s teaching. Within its most effective sequences the film also channels some of the unsettling disjuncture of Urszula and Antek’s conversations around one another, after his death, in No End. Whilst staying in the cottage Anna experiences a sense of not being present, not being in Nick’s company, even though she is talking to him in the darkness of the kitchen. As Anna talks, Nick fails to react. Later on Anna’s perception of the time of day is called into question by Nick’s assertion that it is the middle of the day. Nick proves his point by taking Anna into the nearby town to see a busy market place. Yet the film, at this moment, is clearly identifying with Anna’s subjective experience, creating a rather wonderful sequence in which all of the day’s activities are played out in moonlight. These shifts in subjectivity are hallmarks of Kieślowski’s often self-absorbed central characters, who come to see the world differently from others. It also creates an ingenious tension within Tiere as to whether or not the husband isn’t engaged in some convoluted ‘gaslighting’ exercise.

At the film’s close the overriding impression I had of Tiere was that Zgliński is a technically gifted filmmaker who has significantly developed his aesthetic since 2011’s Wymyk. Working with the likes of Jaxa and the exceptionally talented young Polish composer Bartosz Chajdecki, he has been able to construct an atmospheric and unsettling horror mystery. What proves more problematic is the way in which Zgliński and his creative team have worked with Kalt’s screenplay. There is an overriding sense, especially in the frequent moments of black humor, that they aren’t quite fully aligned with the material. As a result, Tiere often seems confused, but gradually that confusion yields to fascination.