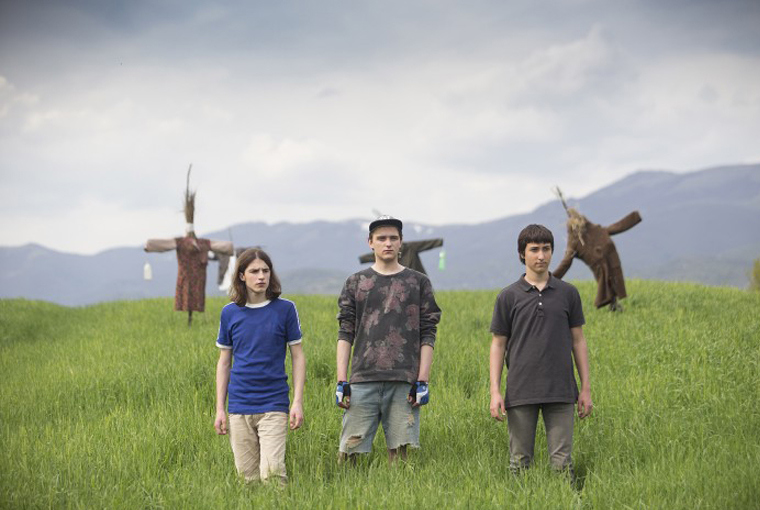 A day that has no name loses the temporality inherent to its appellation. Neither today nor tomorrow, neither distinct from its past nor committed to a different future, a nameless day is suspended between being stuck in a prolonged yesterday and floating in an aimless present. The hopelessness internalized and violently displaced onto others amidst life’s disorientation in empty time is the subject of Macedonian director Teona Strugar Mitevska’s newest feature, When the Day Had No Name.

The film opens at its endpoint and its ending cyclically realizes its beginning: four blasting gunshots punctuate the tranquil still-frame images of lakeside vegetation that commence and culminate the film’s unnamed day. A screen of text consequently explains the film’s cultural context, that in 2012, four young Macedonians were shot and killed at a lake outside of Skopje—an event that polarized Macedonian society. Although the text quickly refutes the film’s relation to historical veracity, stating “but this film is not about them,” When the Day Had No Name nonetheless portrays the events preceding the ethnically motivated killing of four Macedonian teenagers en route to a lakeside fishing trip, thus fictionally reconstructing the historical event. In doing so, Mitevska counters the event’s singularity by depicting the nexuses of violence—between religions, ethnicities, genders, and generations—inscribed into everyday life in contemporary Macedonia. Quotidian desperation nevertheless holds the possibility of erupting into exceptional brutality when lives are effaced amidst the namelessness of time.

When the Day Had No Name centers on the social lives of Macedonian youth, compressed into the film’s daylong time frame prior to the protagonists’ deaths. Their world is dominated by stagnation, aggression, and doom, which Mitevska presents as a microcosm for the social antagonisms and economic precarity that define the generation born after the violent break-up of Yugoslavia. Fractured relations and the liminal angst of adolescence become analogies for the uncertainty and directionless movement after rapid historical transformation. The film’s distinctive cinematography, conducted by Agnès Godard, provides an aesthetic corollary to the protagonists’ existential fragmentation. The juxtaposition of extreme close-ups and wide-angle zoomed-out shots creates an estranging effect that mirrors societal alienation. Additionally, extended frames of still images compose sequences that lack a linear structure despite the viewer’s foreknowledge of the protagonists’ impending deaths. Instead, various images are recycled and appear as visual non-sequiturs, such as a shot of a dark sordid hallway, of Skopje’s Millennium Cross illuminated at night, and of the nighttime highway as the protagonists drive to the lake. The cinematographic repetition of these images creates cyclical narratives in which time is out of joint, underscoring the inescapable circularity of broken lives that lack a nameable future.

“No Future” is graffitied on a wall that forms the film’s urban backdrop, as is “Don’t Trust Women.” Together, they parodically beget the literal inscription of pessimism, fatalism, and doubt in contemporary Macedonia at the site of intimate and gendered relations. The male protagonists’ shameless chauvinism (which at times borders homoeroticism) is performed through the constant verbal and physical denigration of women throughout the film. Maternal figures are presented as the antithesis of authority and as the cause of intergenerational misunderstanding, contributing to the film’s atmosphere of lawlessness that ends in transgression. Moreover, the film’s extended central scene, of the teenagers’ initiation ritual en route to the lake, constitutes the apotheosis of patriarchal violence. The teenage boys hire a young prostitute and each take turns with her in a display fraternal prowess—ultimately violently injuring the sixteen year-old at, if not beyond, the limits of consent. The repeated image of the dark, squalid, and endless hallway in which they each wait for their turn becomes metaphoric of the hollow time of confinement and doom that structures the brutality enacted at the locus of nameable gender difference.

Yet the film’s foremost figure of violence lies in the relation between Macedonians and the ethnically Albanian minority in Macedonia. This inter-ethnic clash is further intersected by religious difference, between Eastern Orthodox Macedonians and Muslim Albanians. Upon a group of young Albanians’ failed attempt to steal a protagonist’s bicycle, the Macedonian teenagers denounce the Albanians as “dirty Albanians” and as “cockroaches.” Towards the end of the film, the teenage protagonists call a group of Albanians “Muslim pigs” in a fight that breaks out at a gas station, preceding their arrival at the lake. Through the film’s sequencing, the deaths of the protagonists become revealed as the retaliatory backlash of this group of Albanians against the Macedonian teenagers’ bigoted provocations. Mitevska’s frank depiction of Macedonians’ scapegoating and animalization of Albanians in When the Day Had No Name thus pointedly condemns the dehumanization of the ethnic/religious Other, which haunts both memories and amnesia in recent Balkans history.

However, When the Day Had No Name is not simply saturated by cycles of cruelty. Its lyricism engenders moments of arrival, where viewpoints shift and glimpses of an alternate future are felt and imagined. After the four fatal gunshots pierce the soundscape of the film’s beginning and ending, the camera cuts from the scene of the crime to a close-up shot of an iridescent green dragonfly resting upon a lakeside plant. The extended frame of the dragonfly signals the endurance of life throughout and after crisis as well as the possibilities of emergence in the slightest changes of perspective. The political ramifications of this mode of seeing are personified by the character Renata. Taunted by the protagonists for her physical appearance, Renata rejects their patriarchal superficiality, steadfastly announcing, “The future of the Balkans is female!” Her self-determined envisioning not just of Macedonia but rather of the collective Balkans beyond the hierarchical divisiveness of gender and ethnicity forms a moment where the future transcends the antagonisms enfolded into the aimlessness of time. Teona Strugar Mitevska’s When the Day Had No Name thus not only portrays the ends of violence repeated throughout the ungraspable time of a nameless day, but also poeticizes the emergence of looking beyond a present of nameable enemies and hopeless anonymity.