Danis Tanović’s Not So Friendly Neighborhood Affair (Deset u pola, 2021) 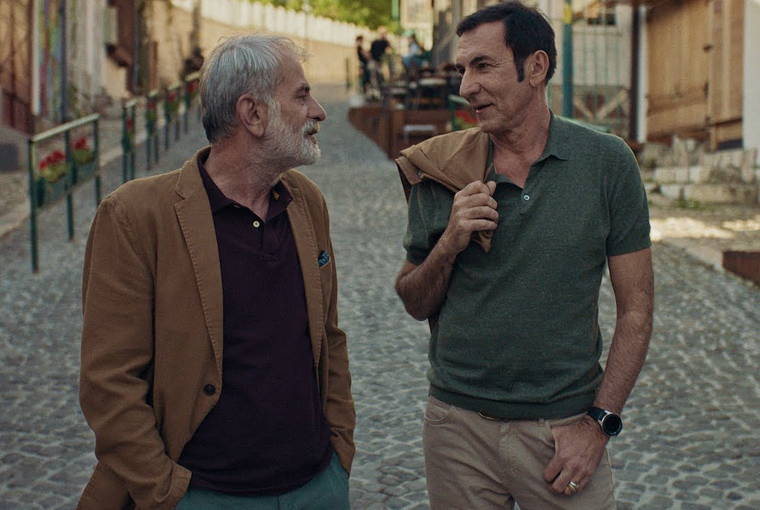 That regional cuisine allows for a playful way of addressing – possibly even relieving – regional conflicts, is a long-known fact. In the Balkans, that insight spawned events such as the Divan Film Festival and the Balkan Food Film Festival, in which the additional cinematic aspect has allowed programmers to complement gustatory movements of intercultural communication with aesthetic and intellectual ones. A similar consideration seems to have inspired Danis Tanović’s latest film, Not So Friendly Neighborhood Affair. After helming several earnest arthouse films that addressed the Yugoslav Wars with the gloom one would expect, this time Tanović addresses tensions in the region with tongue in cheek. A story of two restaurant owners from Sarajevo struggling with the effects of the pandemic and of changing tastes, the film threads schematic characters into a story of conflict and conciliation, giving audiences what they presumably want – a light-hearted, comic story with cathartic relief to look forward to in their own lives when the pandemic finally ends.

In the beginning of the film, the two unequal businessmen – flamboyant and risk-prone Enes (Branko Đurić), and reclusive and wary Izet (Izudin Bajrović) – are introduced as friends. As owners of neighboring restaurants who both make ćevapi, a grilled dish of minced meat, they are theoretically competitors, but their long-time friendship transcends both varying values and differing interests. In fact, their children are supposed to get married and they are considering opening a business together in Germany. But things turn sour when Izet is accidentally visited by Zagreb-based food critic Gordana Matić (Anja Matković), who deems his ćevapi best in town and thereby turns all customers in the neighborhood towards him. Already struggling with debts, Enes now faces bankruptcy as customers desert his restaurant. Stubborn and ever-optimistic when it comes to his ability to turning rich – confidence that will prove misguided – he takes on even more debt from shady local businessmen.

Both the TV-style pace and straightforward structure, and the heavy reliance on predictable jokes, prove that Tanović intended this film as a crowd pleaser. There are no difficult sequences to endure, and no metaphors that need much unpacking. That makes it all the more surprising that Tanović resorted to basing his entire film around a meat dish that is repeatedly filmed in all its questionable glory. Many festivals that Tanović used to be a regular at pride themselves on being ever-progressive and might thus hesitate to program a film that indulges in carnivore food porn. No less risky is the decision to dwell on Covid, with every other dialogue in the first hour being dedicated to mandatory distance, the economic effects of the pandemic, and the necessity to wear a mask and get tested. Do we really want entertainment films that remind us of these tritest of facts? And will we ever?

Be that as it may, the film is otherwise fairly entertaining. The narrative escalates progressively as it must, soon drawing in the children who themselves have a bone to pick with each other. Lana (Helena Vuković) – Izet’s daughter – and Orhan (Kerim Čutuna) – Enes’ son – can’t agree whether they should stay in Sarajevo where Orhan feels most comfortable, or move to Germany where Lana has moved to. The conflict between their fathers, which mostly departs from Enes’ inability to deal with his impending bankruptcy, logically spills over, as both Lana and Orhan are employed by their fathers. The conflict culminates when Enes challenges the town to a ćevapi competition to prove that his are the best in town. For good measure, Tanović also throws in a confrontation with Enes’ mobster creditors, whose end – like that of the relationship between Lana and Orhan – will be decided on the faithful day of the competition.

An interesting change in the ideological framework Tanović navigates relates to his bearing towards the West. Only a decade ago, Tanović had still looked for answers to contemporary issues in both a supposed past and in an equally idealized view of the West. Thus in Cirkus Columbia, another story featuring a character’s homecoming, expatriate character Divko brings back order and prosperity upon his return from Germany, all the while pining over the old days that he had missed. While Divko’s and his environment’s nostalgia is not depicted unsympathetically in Cirkus Columbia, it ultimately makes way for a Western-formulated future in the film. In Not So Friendly Neighborhood Affair, the tables are turned. Here Lana exerts no authority or power over her native environment despite her association with supposedly Western values such as emancipation, progress, and vegetarianism. Indeed, it seems that the film itself – centered as it is around local customs, meat, and men – sees her as an outsider who is only there to attract or at least pacify progressive viewers.

Meanwhile, nostalgia resurges in full strength. The failings of turbo-capitalist Enes, the prevalence of individualism and mutual distrust, and the tiring persistence of the pandemic, all call for a return to the good old ways that are best exemplified by the character of Izet. While the viewer is sure to distrust his conservatism in the beginning – he is shocked and hurt to find that Lana has become a vegetarian – his ever-forgiving nature and immunity to greed ultimately portray him as a character to emulate. Ironically, Izet’s idealism also brings him total success as the story showers him with both customers and opportunities to prove his moral superiority.

While Tanović’s newly found skepticism vis-à-vis the West retraces the collective realization of many societies that its promise of prosperity is only that, the fact that he resorts to nostalgia instead proves that he has not escaped the Kulturkampf on the Balkans, but merely repositioned himself within it. That one might strive for neither fictions from the West, nor for those from the past, is an option Tanović does not seem to have entertained yet. Instead, he places his trust in the truths carved out by past generations. In the film, it is Izet – an old, peaceful man who dreams of retirement – who outsmarts Enes’ mobster creditors at gunpoint thanks to his unshakeable righteousness. That seems like a grave perversion of collective experiences across the region, where a weak state has allowed Western corporations and local criminals to strip the population of their share of the local riches. While that may not have shaken most people’s belief in value conservatism, it certainly proves that value conservatism is stale when it does not align itself with the interests of politicians and corporations. Whether we sympathize with Izet’s traditionalism or not, Tanović’s image of an old man conquering greater forces offers catharsis where there is none.