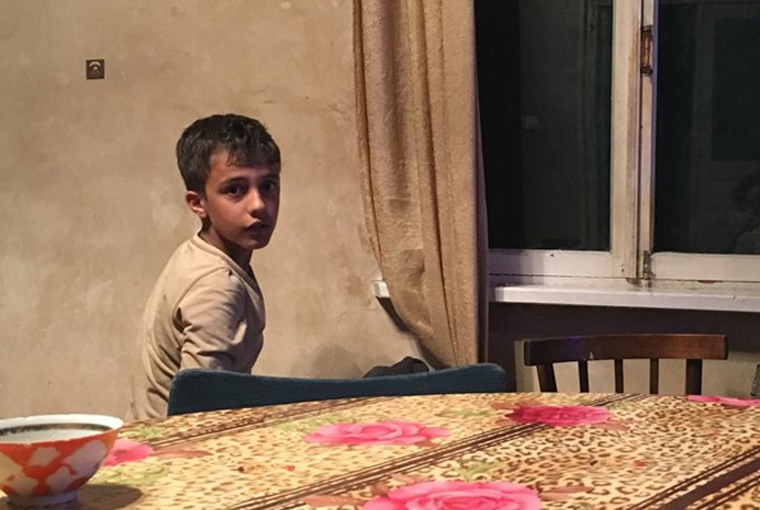 The end is in the beginning and yet you go on.

Dea Kulumbegashvili’s film is structured around Chekhov’s gun, the dramatic principle that states that if there’s a gun hanging on the wall in the first act, it should go off in the third. Her film starts with a Jehova Witnesses’ gathering, during which their leader David tells the story of the Binding of Isaac. At the end of the movie David’s wife Yana kills their son Giorgi. That’s a perfect Chekhov’s gun if you’d want to teach it to new generations of scriptwriters.

But how do you approach this dialogue between the two stories – the biblical and the real one? Because in the end that’s the heart of the movie. Actually, the scene of the filicide was the first one Dea had put on paper. But even without knowing that, I am convinced that the only question every average viewer should ask themselves after watching the movie is this: “What the fuck did the son have to do with it?”

I am aware that my question “What the fuck did the son have to do with it?” is the same question Abraham could ask God who tells him to kill his son. But I will not accept an analogy for an answer, because I am not asking about God and Abraham. Too often, instead of answering the question they shove the Bible in your face.

But this time I did bet on Dea, I bet she herself would appreciate something that looks more like thinking. I did so because I liked the movie, not because I understood what the son had to do with it. At this point I can only hope my bets pay off.

So back to the “beginning”. The situation in which we meet the protagonist, Yana, is that of stagnation. In her life, she is dealing with something utterly unpleasant, yet at first she can’t point out just what it is. She tells her husband David that something’s wrong with her, she feels she is waiting for something to start or to end. She also says that she looks in the mirror and that a stranger looks back at her.

David doesn’t understand, he’s deep in thought, trying to figure out how to find money to rebuild a communal building that had been burnt down by extremists, and he needs Yana’s support for that. Although Yana is still quite unarticulate about her complaints, one thing she is sure of is that she doesn’t want to participate in all that church business. She even tells him that if he takes her with him to talk to scissorbills, she’ll spend all the time by herself in the hotel. Because she wants to be by herself.

Now we can at least say that she’s in an unhappy marriage. Her husband wants to be this big shot in the Jehovah Witnesses affair, and she could not care less. She loves him, but they won’t talk anymore. She wants him to leave her alone.

Then she has a son she loves, Giorgi, but she feels she’s lying to him. That’s what their relations can be reduced to at the first go. She is his religious teacher, and she teaches him truths she doesn’t believe in herself. So she doesn’t talk to her child any more than she talks to her husband. In both cases there is this status quo of their common identity that prevents them from being a family.

And that leads us to religion. Yana doesn’t believe in it as represented by her husband’s occupation. She doesn’t believe in it as a means of her son’s education. But, most fundamentally, she doesn’t believe herself, so the ultimate separation is her separation from herself. It is her and her family who are supposed to live by Jehovah’s principles. Do they? And if that’s not what they’re doing, what exactly is it that they are doing: David – building churches and preaching, Yana – teaching Bible to children, Giorgi – studying psalms?

If we are not living our lives, who’s living them?

“I look at the mirror and a stranger looks back”.

A stranger knocks on Yana’s door and he says: I will do anything I want to.

Who knows, had they been more careful with each other, Yana and David, if only they both paid more attention, just stayed together, that knock might never have happened. But they didn’t. I noticed that while talking about this film Dea often refers to this image of a “point of no return”, which is essentially a point that seems totally avoidable at first – and then all of a sudden you cannot go back.

I think in this film the point of no return is when David leaves Yana, who is troubled, alone. This situation where the actual problems are in one place, and David tries to resolve them in another – by building another building, preaching some more preaches – is a point of no return. We would like this point to arrive later, much later. As Dea points out herself, “characters should take a step back to question their actions, their lives, and try to make sense of them — but they don’t”.​1​ From there on the only way is downwards.

That’s why a spectator can even ask themselves at one point: “Does he really exist?” It is a significant question that makes it clearer in what way everything from now on happens in two dimensions – first and foremost, of course, in Yana’s head.

It is no surprise that the two visits are more revelatory for Yana than they are for the aggressor, who is really more of a force than a character. You can see it, she almost studies what happens with her, and her responses are not at all random or driven uniquely by fear. Seeing what is happening to her now, she can finally see what has been happening to her all along. A great scene in this regard is her erratic but almost triumphant act of cleaning herself up in the bathroom after the rape. That’s the part of the film where, almost entirely surrendering to passivity, she actually gains control over her life for the first time, even if she uses this control to inflict a kind of self-punishment on herself.

What happens next is this beautiful 7-minute shot that will go down in the history of cinema. We witness a complete dissolution of two worlds. Yana becomes herself in a way that we’ve never seen before: in this scene she is no longer a housewife, no longer a mother, no longer a teacher. Also, and this is no less important, she is no longer in the city. Even her son is unable to catch her attention. She is beautiful and free. Needless to say, this doesn’t last any longer than these 7 minutes of her life. The events of the previous days transformed and liberated her in a way, but she now has to meditate on the context of that change. What does that change mean in the context of her family? I think this meditation is at the core of the visit to her mother. What she discovers after that visit, and after her husband’s return, and what represents the climax of the tragedy in The Beginning, is that all she’d been through will not change anything.

That realization leads to a medical condition – paranoia, or rather a quick leap in its existing development. Again and again, Yana realizes that nothing will change, because what happened to her was something that’s already been happening to her for a while without her knowing. She understands that violence is not an accident, that it’s the rule of her life, because the readiness to silently partake in the plans of others is the essence of her condition, and it is imposed on her by an unnamable law, an innumerable whole: by the man at the police station, by her rapist, by her husband, by the children running on the streets, and, ultimately, by her son. That’s how paranoia works: the innumerable becomes the indistinct.

I think Dea’s own hint at the resemblance between the killing of Giorgi and the biblical fall from Paradise makes sense.​2​ Although the Bible considers Adam and Eve’s fall from Paradise a tragedy, a sinful act, for which Jesus would have to seek repentance on the Cross, it is also an undeniable act of will. And the meaning of this act is to challenge God: you cannot limit what you yourself made limitless, you cannot ask for unconditional obedience from those whom you gave desires and forces to disobey. And here we return to Abraham and Isaac. You cannot ask me to sit tight and wait while he’s lighting the fire just because you think that is my role in this story. Because I am human and waiting is agony.

After watching the film, I was very confused, and I told myself: “Probably that’s the story of this woman’s liberation”. Actually, Dea says something like that herself: “Beginning is a woman’s journey to accept herself, despite the infinite abyss she faces”.​3​ But then, again and again, I couldn’t stop myself from thinking it was bullshit and couldn’t she leave her son the fuck alone? Of course she could. This film couldn’t be so stupid. No one becomes free this way. And I told myself not to symbolize, this is just a story of a woman who loves her child, but goes crazy because of the shit everyone’s giving her. The sheer ugliness of it nagged me for a while already, when I called my great-grandmother, who’s 93 years old. I started telling her about the movie and I told her that it ends with a woman killing her son. “Oh my God,” she said, “that’s the worst thing that can happen in the world.”

It seemed so natural. It is the worst thing that could have happened to Yana. If her act is an act of liberation – it is a liberation without liberty. Maybe she doesn’t fear anymore, but she also doesn’t see anymore. Everyone who has ever met someone who has lost their mind knows what’s the scariest thing about meeting them: they don’t see you. This beginning is the end. And yet you go on.