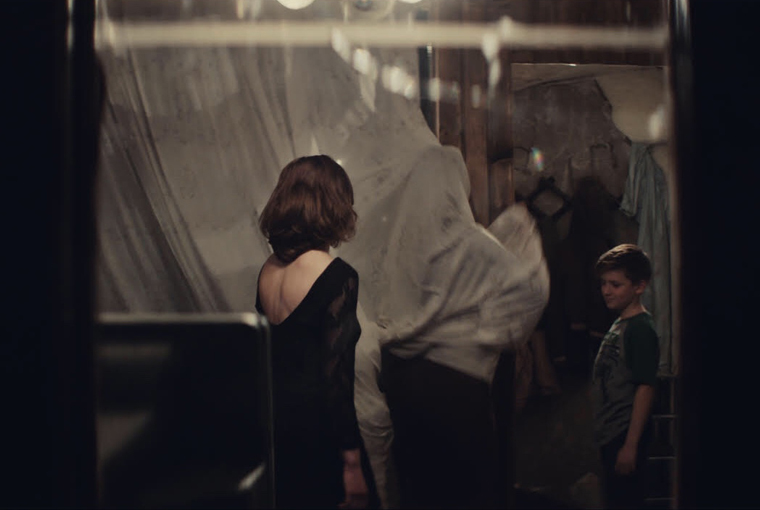 Norika Sefa’s propitious feature film debut adopts a contemporary neorealist approach. Through minimal dialogue and unobtrusive cinematography, the director peels back the life of a young girl and her struggle to come of age in a local, impoverished Kosovar town. Against the behest of her judgemental parents, Venera (Kosovare Krasniqi) is befriended by the radical Dorina (Rozafa Cefaj) at school, a solemn symbol of transgression and freedom. Cultivated by this relationship, the inexperienced and innocent Venera will explore new pleasures and unavoidable pains as she tries to comprehend a sense of self in her formative years.

One of the most intriguing and creative aspects of Looking for Venera is the masterful camerawork. Every shot seems to capture Venera’s feeling of inertia. The camera remains static, even if the action moves out of frame, another figurative dead-end as it were. The spectator’s view is often obstructed as the mise-en-scene appears to trap the protagonist in her surroundings. With her restricted gestures and submissive demeanor, Venera’s physical performance mimics the cramped sense of space. She is visibly bound by the suffocating domestic setting and her role within the household.

Outside these claustrophobic interiors lies a desolate wasteland full of other (literal) borders that must not be crossed. Above the tunnel where Venera steals her first kiss is the bridge that leads into town from the forest. This maze of trees is a barren wilderness, intimidating in its sheer scope. In this primal and untamed landscape, Venera stumbles upon Dorina having sex. The unkept aesthetic of such an environment mirrors the rough, animalistic nature of the lover’s forbidden act and Venera’s voyeuristic obsession symbolizes a line that she has crossed and her innocence that has consequently been lost.

The town itself resembles a scrapyard or construction site rather than a residential estate. The buildings have been stripped bare, with rubble strewn across the streets, riddled with cement blocks and trash. Roofs and walls are compiled of rusted metal sheets and splintered doorways, dissected by dirty washing lines hanging between houses. Wailing pneumatic drills, whirling cement mixers, and whining dogs plague the space just beyond the other side of the windows.

Another nuance the film displays is the varying degrees of womanhood in its characters. The representation of the female figure stretches beyond the archetypal nagging mothers, wizened grandmothers and hormonal girlfriends found in similar genre features. They borrow from each other’s extremes of femininity (or lack thereof). They can be both vivacious and sterile, rebellious and conformist. They switch between being attracted to, tired of and afraid of men. For example, Venera’s mother Nora encourages her daughter to take spare underwear to a party but remains silent when her husband slaps Venera at the breakfast table for returning home after curfew. Nora is empathetic and excited for Venera’s sexual expectations at going out to a club, yet cowardly for not protecting her child against domestic abuse. These scenes are illustrative of the hypocritical and contrary nature of parenthood but also prove just how complicated the role of a mother can truly be. When Nora dances with Venera after the party, her veil of motherhood slips away, revealing a youth lost long ago. They thrash around the room, uninhibited, just two likeminded free spirits. It is a rare moment of unity and communication in an otherwise deadpan world that is even more beautiful because it exists entirely independently from the patriarchy.

The modern woman Dorina is more expressive and animated. She flaunts her coquettish energy around the town, flirtatious and undeterred by the whispers of a community that seeks to besmirch her promiscuous reputation. What she lacks in direction she overcompensates for in experience and assuredness in how to get exactly what she wants. Her refusal to be shackled by the labels put upon her by her peers is a shocking revelation to Venera as Dorina quickly becomes her role model. She explains to Venera after losing her virginity: “I know myself better now”. Through her sexual awakening Dorina finds liberation and a keen sense of identity that elevates her from the town of misfits, oddballs and losers. It is Dorina’s big-fish-small-pond attitude that inspires Venera to seek and act upon a life outside the patriarchy. Dorina has the capacity to act as a mother but her lack of responsibility ensures she can only offer friendship to Venera. However, the film is careful not to establish a hierarchy of women. The importance of mothers and girlfriends run parallel, with both roles offering varied yet equally integral influence and emotional development to aid Venera in her own character arch.

The complexity with which femininity is portrayed is a refreshing contrast to the (possibly intentional) one-dimensional male characters such as Dorina’s boyfriend Gent and Venera’s father Luan. The men of the town share the ability of uselessness. They fail to provide emotional support, romantic interest and social mobility. In one humorous scene, a gang of clueless laborers fail miserably to assist Luan in fixing a broken door. Patting themselves on the back after the painstaking task is complete, the men ask Nora to try it out and she instantly knocks the door off its hinges once again. Women are foregrounded as the strongest and most complex sex, which makes it even more distressing when they are held back from reaching their potential by the interference of men.