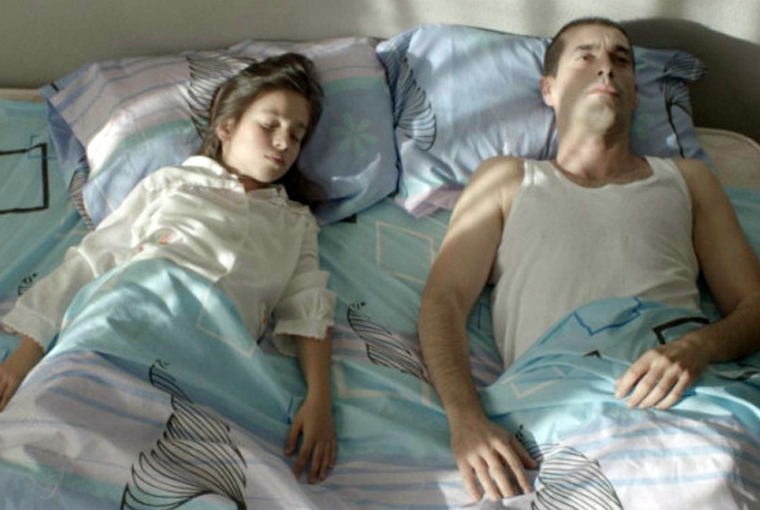 Home Sweet Home tells a familiar story in a new way. Director Faton Bajraktari and screenwriter Zymber Kelmendi present a fresh take on the tale of the soldier coming home after the war who is unable to adjust to a peaceful society. The twist in Home Sweet Home is that the soldier cannot fit in because he is secretly kept at home by his family and friends, for their own benefit. As a martyr for Kosovo, his entourage prefer him dead. The symbol and myth of his martyrdom are more important than the man behind them.

Agron (Donat Qosja) returns home after having been presumed dead for four years. He had not returned from a battle referred to as “Great Mountain”, in which many people died. Only his old friend and comrade Bashkim (Shkumbin Istrefi) made it back alive, and the idea that Agron hadn’t survived took hold. His return is quite a shock to both Agron and his family, especially his wife Hana (Arta Muçaj).

The music in this first scene is awfully overbearing, and gives the impression that a predictable melodrama is about to start. However, the film turns out to be a darkly absurd comedy. The music won’t return until the final scene, where it is used rather effectively.

Only Agron’s youngest daughter Blerta (Lea Qosja, the actor’s daughter) seems immediately happy and thrilled at her father’s return. Their relationship is touching and funny, thanks to a lovely performance by Lea Qosja and the clear chemistry and warmth between the real-life father and his daughter. Blerta keeps taking Polaroids and drawing pictures of her father, as if to make sure he’s really there and not going to go away again. Agron’s other children and his wife do not embrace his return in the same way. Their whole life has become defined by his absence, making his presence more than just an inconvenient truth.

Hana has become the chairwoman of an organization that fights for the rights and interests of war widows, which has turned into her (and thus the family’s) main source of income. Not only does the family depend on her keeping this job, it has given Hana a sense of purpose and importance. She is proud of the job and the status that comes with it, which would all disappear if Agron “comes out” as alive, as she says. And thus she asks him to remain in the house for a while, and not make his return public just yet.

Their eldest daughter Ditra (Susan Mustafov) also has a lot riding on her father’s death. She wants to study medicine, but doesn’t have the grades or the ability to make it to medical school. However, as the daughter of a martyr, she’ll be put on a special list of kids that automatically pass the exams. Lazy son Luan (Albin Bajraktari) is in a similar, if lower stakes situation: he has been gearing up to go on a spectacular school trip, which is only for the children of martyrs.

Army buddy Bashkim might have the greatest interest in keeping Agron hidden. He’s now the school principal, and managed to get an international organization to invest in the school for a new building and new learning materials – but on the condition he’d name the school after local war hero Agron, including a bust in front of the school. Agron is even asked to comment on the designs for the bust.

Bashkim is the one to ultimately convince Agron to keep waiting, keeping Agron in a state where he is both dead and alive, cooped up in the house without anything to do. He identifies with a strange man he keeps seeing from his window, who keeps landing on a hill with a parachute and then fails to get up. This surreal image symbolizes his identity crisis, that can only be resolved by him either becoming alive or dead again.

These absurdities are piled up on top of each other in a darkly comic way, culminating in a scene in which Agron watches the video tape of his own funeral, including a eulogy full of lies by Bashkim. It’s during this highlight of Home Sweet Home that Agron realizes that the myth of the martyr has become more important to his loved ones than his real life.

Bajraktari won the Fipresci award at the Tirana International Film Festival, and Home Sweet Home is Kosovo’s entry in the best foreign-language film category at the Oscars. The film deserves praise for humorously deconstructing the myth of the modern soldier, entirely sidestepping the problems real soldiers face in society. The idea of the soldier as hero and martyr for the country keeps everything running somewhat smoothly, in fact, everyone depends on it, whereas the actual soldier is a problem that’s better swept under the rug.